Recording "Back On My Feet"

"Flowers In The Dirt" session #1

"Flowers In The Dirt" session #2

"Flowers In The Dirt" session #3

"Flowers In The Dirt" session #4

"Flowers In The Dirt" session #5

"Flowers In The Dirt" session #7

Put It There / Mama's Little Girl

Playboy To A Man

Playboy To A Man

Disc 4 was shamefully not available as a physical support. Those who purchased the Deluxe version were entitled to download those tracks.

Flying To My Home

Disc 4 was shamefully not available as a physical support. Those who purchased the Deluxe version were entitled to download those tracks. The cassette demos have also been released on a cassette for Record Store Day.

The long awaited 10th release in the multiple-Grammy Award-winning Paul McCartney Archive Collection has been confirmed: On March 24, 2017, Paul’s 1989 international #1 album, Flowers In The Dirt, will be the latest classic solo work from one of the world’s most revered catalogues to get the special treatment across a multi-format reissue released by MPL/Capitol/UMe.

The Paul McCartney Archive Collection release of Flowers In The Dirt was, as always, personally supervised by Paul himself.

One of the most critically acclaimed albums of the eighties, nominated for both BRIT and Grammy Awards, Flowers In The Dirt saw Paul team up with Elvis Costello to co-write a third of the album (‘My Brave Face’, ‘You Want Her Too’, ‘Don’t Be Careless Love’ and ‘That Day is Done’) as well as boasting production credits from producers such as Mitchell Froom, Trevor Horn, David Foster, Steve Lipson, Elvis Costello and Paul himself.  Pink Floyd guitar legend David Gilmour makes an appearance on ‘We Got Married’ and George Martin’s string arrangement on ‘Put It There’ is amongst the many album highlights.

The Flowers In The Dirt Deluxe Edition Box Set will undoubtedly be yet another crown jewel in the collection of any Paul McCartney fan. In addition to its wealth of audio and video content, exclusive features of the Deluxe Edition include a 32-page notebook of Paul’s handwritten lyrics and notes, a catalogue for Linda McCartney’s 1989 Flowers In The Dirt photo exhibition, a 64 page photobook featuring the music videos for ‘This One’, and a stunning, custom-created 112-page book telling the complete story of the album through exclusive in-depth interviews with Paul, Elvis Costello and other key contributors. Along with expanded track-by-track information, the book contains album and single artwork as well as previously unpublished photographs by Linda McCartney.

Sessions for Flowers In The Dirt began in 1987 and the majority of the album was recorded at Paul’s Hog Hill Mill studio in East Sussex. During the sessions Costello convinced Paul to dig out his iconic Höfner bass for the first time in years — a suggestion McCartney recalls as, “unusual because I had sort of parked it. I had thought I had outgrown it. I started playing it again and never really looked back. It’s great that Elvis encouraged me to take it out.”  In preparation for his first major world tour in years Paul was looking to capture songs he could take on the road with him. Paul told his band that he wouldn’t go out on tour unless he really liked the album. Looking back Paul recalls, “You’re always thinking, ‘Let’s get some new songs and take them on tour’ and you hope your new songs are going to work. Something like ‘My Brave Face’ would be a song that nobody knew at the start at the beginning of the tour and then everybody knew it at the end and it was the high spot of the whole tour.”

The original 13-track album was remastered for all the new configurations at Abbey Road Studios. The Deluxe Edition contains 18 bonus audio tracks across two discs, featuring previously unreleased demos, written and performed by Paul with Elvis Costello. Speaking about these tracks Paul said: “The demos are red hot off the skillet and that’s why we wanted to include them on this boxed set. What’s great about these songs is that they’ve just been written. So there’s nothing more hot off the skillet as I say. So that was the kind of great instant thing about them. I hadn’t listened to them in ages but when I did I knew we had to put them out. We made a little tape of them and sent them to Elvis, who loved them too. We said we should put out an EP or something and now the moment’s finally arrived.”

The Deluxe Edition also includes, as digital downloads only, three unheard cassette demos, ‘I Don’t Want To Confess’, ‘Shallow Grave’ and ‘Mistress And Maid’ as well as a collection of original B-sides, remixes and single edits.

The DVD that comes with the Deluxe Edition includes all the music videos from the album, three new short films with unseen archive material that show some of the creation process of the album and the documentary ‘Put It There’ originally released on VHS in 1989 – a behind-the-scenes look at the making of Flowers In The Dirt as well as featuring live performances from his 1989 World Tour.

The 2 CD Special Edition includes the remastered version of the album on the first disc. The second disc includes Paul and Elvis’s previously unreleased original demos.

The 2 LP Edition also comes with a digital download version. The first LP includes the remastered album but in keeping with the original vinyl release doesn’t include ‘Où Est Le Soleil?’ (this track will be available with the accompanying digital download). The second LP includes Paul and Elvis’s previously unreleased original demos. 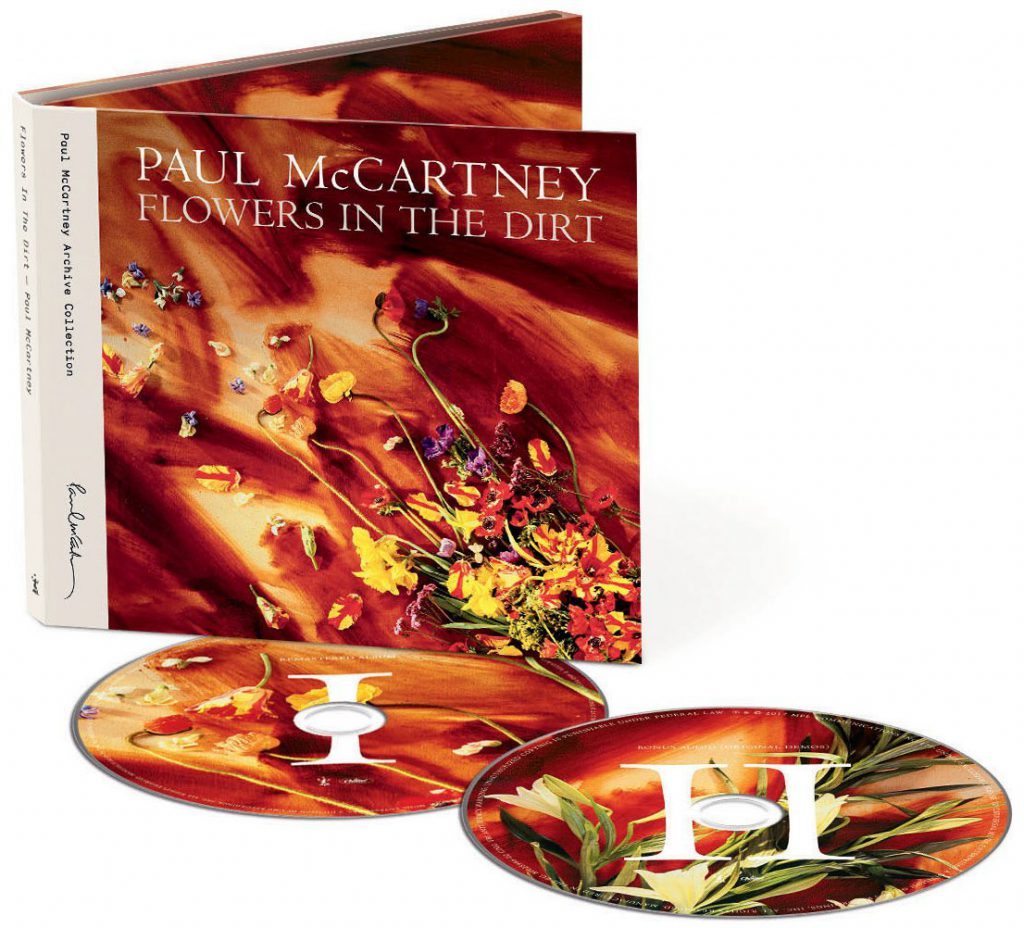 It is confusing that you mention Disc 4 (Original B-sides, remixes and single edits) and the cassette demos here, as they were (regrettably; notoriously; shamefully) no part of the DeLuxe Archive Collection. Disc 4 only as digital release, the cassette demos only as Record Store Day cassette.

hi @gerbrand . I've added a sentence ("Disc 4 was shamefully not available as a physical support. Those who purchased the Deluxe version were entitled to download those tracks.") to avoid the misleading.

The cassette demos were also available as downloads, as stated in the press release. True that I could have added the Record Store Day cassette as well - added to my todo list !! Thanks

Thanks for a great website ! Thanks for the update to disc 4 (“physical release” maybe better than “physical support”). Feel free to delete my comments now you’ve made the changes.