Yesterday I was at a rehearsal with David Crosby in LA. He and his band are getting ready for the tour that starts next week. Partway through the rehearsal, David stepped outside for some air. A blue Corvette pulled up and the window went down. The driver was Paul McCartney.

It was one of those moments where time seemed to stand still. The day before, while flying to LA, I watched Ron Howard’s new film “Eight Days a Week,” a masterful tribute to the Beatles that shows how Paul, John, George and Ringo became the biggest musical stars in history. And there I was, face to face with one of them.

Turns out Paul was rehearsing in the studio next to David’s. A couple hours later, he invites David and his band to join him in studio. I follow David. Paul greets everyone. Then he and his band go right into “Junior’s Farm.” […]

These guys are jamming and I am one of a handful of people in a studio. My feet are tapping and the hair is up on my arms. The only thing I can compare this to would be having Babe Ruth show up at my Little League game and saying he’d like to take a few swings.

But not even the Babe makes you want to twist and shout.

When he got to the signature line – “Beep Beep’m Beep Beep, Yeah,” I was struck by the fact that people around the globe – in Russia, Australia, South America, Iceland – can sing “Beep beep’m, beep beep, yeah.” Paul and John wrote lyrics that became a universal language. It’s a language that puts smiles on people’s faces. What a gift!
Then he played one of the happiest songs I know – “Ob-La-Di, Ob-La-Da.” […]

Smiling as he played, he looked at us and invited us to sing along. […]

It is one of the most surreal moments of my life. I’m actually singing along with Paul McCartney. Ob la di, ob la da, life goes on.

David Crosby has given me one of the most memorable moments of my life – a private audience with the man whose music has shaped so much of the culture that was my upbringing. 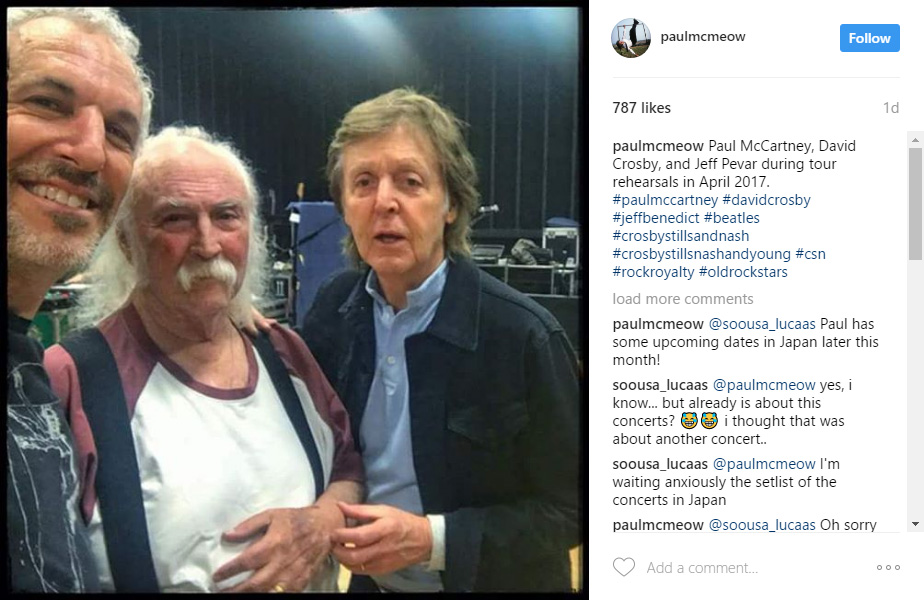