Paul McCartney Sgt. Pepper Exclusive: “It Was A Risk!”

Album This interview has been made to promote the Sgt. Pepper's Lonely Hearts Club Band (2017) Official album.

‘You Gave Me The Answer’ – Sgt. Pepper Special

The interview below has been reproduced from this page . This interview remains the property of the respective copyright owner, and no implication of ownership by us is intended or should be inferred. Any copyright owner who wants something removed should contact us and we will do so immediately.

PAUL McCARTNEY HELPS MOJO celebrate 50 years of the Beatles’ Sgt. Pepper’s Lonely Hearts Club Band with an exclusive interview in the magazine that hits UK shops on Tuesday, April 25. He recalls the circumstances surrounding the group’s most groundbreaking album and gives his verdict on the new stereo mix designed to add legs to one of popular music’s key benchmarks.

But as McCartney reminds MOJO, before Sgt. Pepper became an icon, there was a period of critical bemusement. How dare Beatles band go all weird?

“We were always being told, ‘You’re gonna lose all your fans with this one.’” McCartney tells MOJO. “And we’d say, ‘Well, we’ll lose some but we’ll gain some.’ We’ve gotta advance.”

In 1967 The Beatles ran the gauntlet of a media gripped in a moral panic over the younger generation’s embrace of drugs, and others who regarded Pepper’s stylistic smorgasbord and hints of thematic coherence as evincing ideas above the group’s station. The Lovable Moptops stereotype died hard.

“Sgt. Pepper did actually get a terrible review in the New York Times,” recalls McCartney. “The critic [Richard Goldstein] said he hated it, thought it was a terrible mess, and then he was on the streets all week and heard the talk, heard what people were saying, and he took it back [in a subsequent Village Voice piece], recanted after a week: ‘Er… maybe it’s not so bad.’ But we were used to that. She Loves You was ‘banal’. But if we liked it and thought it was cool, we would go for it.

“…I mean, George doing Within You Without You,” continues McCartney, “a completely Indian record – it was nothing anyone had heard before, at least in this context. It was a risk, and we were aware of that.”

But even given Sgt. Pepper’s subsequent rise to peerless status, there’s one aspect of the record that has consistently drawn flak, even (perhaps especially) from fans.

“The original stereo mix is a bit of a period piece,” McCartney concedes. “You’ve got the drums in one corner. You’ve got the vocals in another corner. We would be at listening parties, have some mates around and I’d go, ‘Listen to the drums on this, man!’ …and you couldn’t hear ’em. Oh! They’re over there in the other corner of the room.”

That’s been addressed in the reissue of Sgt. Pepper that’s due on the streets on May 26. A muscular new Giles Martin stereo mix returns the Beatles’ drums and vocals to central positions reminiscent of the original mono mix, and gets McCartney’s seal of approval.

“‘Muscular’ is a good word,” he agrees. “It sounds more like us playing in the room and more like we intended it.”

Also in MOJO’s from-all-angles Pepper coverage: the Beatles’ peers recall when (and where!) their minds were first blown by the album that kicked off The Album Era; Nigel Hartnup remembers pressing the shutter on that cover photo; Jon Savage on Pepper’s treasures, song-by-song; Giles Martin justifies his new mix; and more! 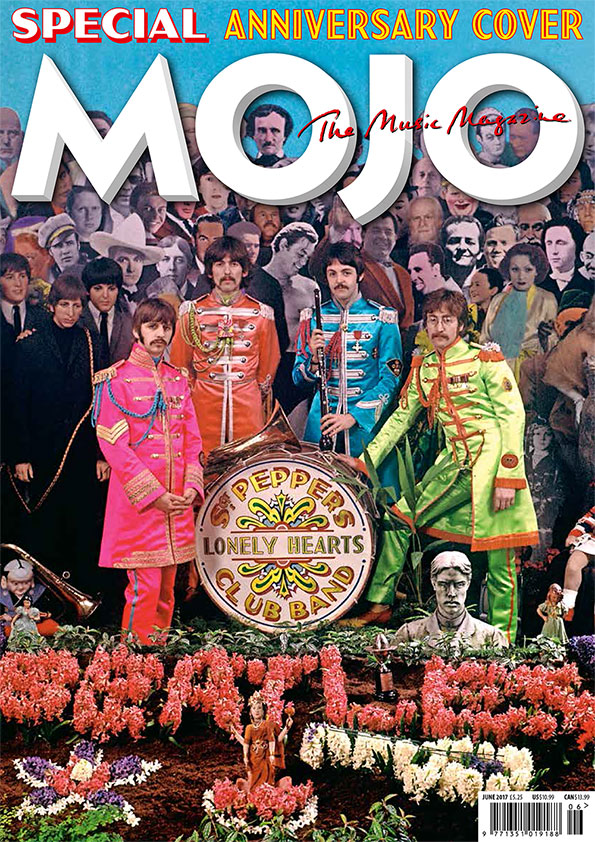