“Ob-La-Di, Ob-La-Da” is a song by the Beatles from their 1968 album The Beatles (often called “the White Album”). Although credited to Lennon–McCartney, the song was written solely by Paul McCartney. It was released as a single that same year in many countries, but not in their native United Kingdom, nor in the United States until 1976.

Paul McCartney wrote the song around the time that highlife and reggae were beginning to become popular in Britain. The starting lyric, “Desmond has a barrow in the market-place“, was a reference to the first internationally renowned Jamaican ska and reggae performer Desmond Dekker who had just had a successful tour of the UK. The tag line “ob-la-di, ob-la-da, life goes on, brah” was an expression used by Nigerian conga player Jimmy Scott-Emuakpor, an acquaintance of McCartney.

In May 1968, following their return from studying Transcendental Meditation in Rishikesh, India, the Beatles gathered at George Harrison’s Esher home, in Surrey, to record demos for their upcoming project. “Ob-La-Di, Ob-La-Da” was one of the twenty-seven demos recorded there. McCartney performed this demo solo, with only an acoustic guitar. He also double-tracked his vocal, which was not perfectly synchronised, creating an echoing effect.

The formal recording of “Ob-La-Di, Ob-La-Da” involved several days of work, during which the Beatles experimented with different tempos and styles. At McCartney’s insistence, the band remade the song twice in an effort to capture the version he was aiming for. According to studio engineer Geoff Emerick, John Lennon “openly and vocally detested” the song, calling it Paul’s “granny music shit“. Having left the studio during one of the sessions, Lennon then returned while under the influence of marijuana, went immediately to the piano and played the opening chords louder and faster than before. He claimed that was how the song should be played, and that is the version the Beatles ended up using.

When singing the vocals over the final verse, McCartney made a slip and said “Desmond stays at home and does his pretty face” (rather than Molly), and had Molly letting “the children lend a hand“. Reportedly, this mistake was retained because the other Beatles liked it. Harrison and Lennon yell “arm” and “leg” between the lines “… Desmond lets the children lend a hand” and “Molly stays at home …”

The lyrics of Harrison’s White Album track “Savoy Truffle” include the line “We all know Ob-la-di-bla-da, but can you show me where you are?” According to music journalist Robert Fontenot, Harrison (like Lennon) was “very vocal in [his] dislike of ‘Ob-La-Di, Ob-La-Da’“, and the reference in “Savoy Truffle” was his way of conveying his opinion of McCartney’s song.

The intro of this song is heard on the Beatles’ 1968 Christmas Record.

“Ob-La-Di, Ob-la-Da” was released on The Beatles on 22 November 1968. In the US, in 1976, it was released as a single with “Julia” as the B-side. An alternate version, known as “Take 5”, was released on Anthology 3 in which the horns are much more prominent and feature less reggae-esque style of music, focusing on acoustic guitars.

The first time the song was performed live by any of the Beatles was on 2 December 2009, when McCartney played it in Hamburg, Germany on the first night of a European tour. McCartney also performed the song in Hyde Park on 27 June 2010 as part of the Hard Rock Calling event, and the song was well received by the crowd. He also added it as a number in the Latin American Leg of the Up and Coming Tour. In 2011, the song was performed during McCartney’s on the Run Tour. It was also performed in front of Buckingham Palace for the Queen’s Diamond Jubilee celebrations, then at San Francisco’s Outside Lands concert on 9 August 2013. Most recently, it was performed by McCartney on his 2013-2015 Out There! tour and his 2016 One on One tour..

“Ob-La-Di, Ob-La-Da” went to number one in singles charts in Austria, Switzerland, Australia and Japan. In the UK and Norway (where it had not been released as a single by the Beatles), a cover version by the Marmalade also made number one.

The track is often the subject of ridicule. It was voted the worst song of all time in a 2004 online poll organised by Mars. New Musical Express website editor Luke Lewis has argued that the Beatles recorded “a surprising amount of ropy old toss“, singling out “Ob-La-Di, Ob-La-Da” as “the least convincing cod-reggae skanking this side of the QI theme tune“. Tom Rowley in The Telegraph named the track as a “reasonable choice” for derision, following the result of the Mars poll. It was also included in Blender magazine’s 2004 list “50 Worst Songs Ever!”

Jimmy Scott-Emuakpor (McCartney’s Nigerian acquaintance) later tried to claim a writer’s credit for the use of his catchphrase in the song; McCartney claimed that the phrase was “just an expression“. Scott argued that not only was the phrase not a general expression, but that it was in fact exclusively used in the Scott-Emuakpor family. He later dropped the case when McCartney agreed to pay his legal expenses for an unrelated issue. […]

We went to a cinema show in a village where a guy put up a mobile screen and all the villagers came along and loved it. I remember walking down a little jungle path with my guitar to get to the village from the camp. I was playing ‘Desmond has a barrow in the market place…’ […]

I had a friend called Jimmy Scott who was a Nigerian conga player, who I used to meet in the clubs in London. He had a few expressions, one of which was, ‘Ob la di ob la da, life goes on, bra’. I used to love this expression… He sounded like a philosopher to me. He was a great guy anyway and I said to him, ‘I really like that expression and I’m thinking of using it,’ and I sent him a cheque in recognition of that fact later because even though I had written the whole song and he didn’t help me, it was his expression.

It’s a very me song, in as much as it’s a fantasy about a couple of people who don’t really exist, Desmond and Molly. I’m keen on names too. Desmond is a very Caribbean name.

The mono [b] lacks handclaps in the intro, heard in [a].

The fruit of three days’ work in number two studio at Abbey Road, this outtake of Paul’s Ob-La-Di, Ob-La-Da included overdubs of three saxophones and conga drums. Passed over in favour of a re-make that began the following week, however, it proved the first instance that the Beatles had brought in session musicians to augment a recording that would remain unissued.

Desmond has a barrow in the market place
Molly is the singer in a band
Desmond says to Molly, "Girl I like your face"
And Molly says this as she takes him by the hand

In a couple of years they have built a home, sweet home
With a couple of kids running in the yard
Of Desmond and Molly Jones

In a couple of years they have built a home, sweet home
With a couple of kids running in the yard
Of Desmond and Molly Jones, hey

2:56 • Outtake • C • Stereo • Alternate version. The fruit of three days' work in number two studio at Abbey Road, this outtake of Paul's Ob-La-Di, Ob-La-Da included overdubs of three saxophones and conga drums. Passed over in favour of a re-make that began the following week, however, it proved the first instance that the Beatles had brought in session musicians to augment a recording that would remain unissued. 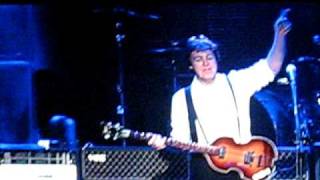 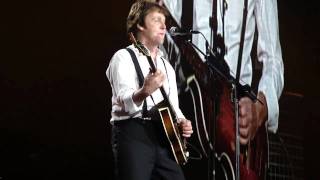 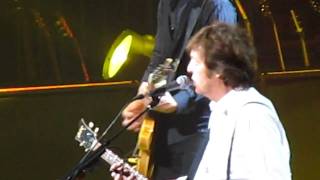 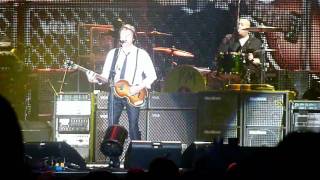 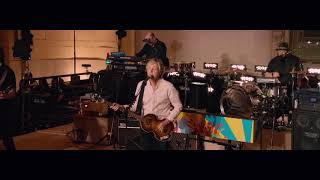 See all concerts where “Ob-La-Di, Ob-La-Da” has been played