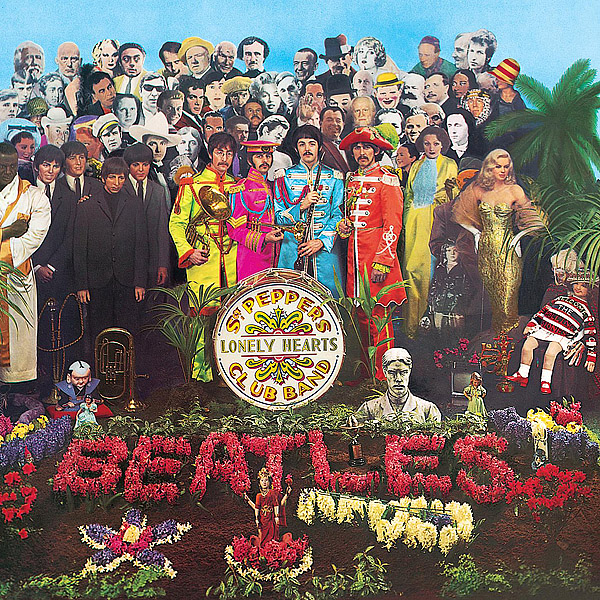 London – April 5, 2017 – It was 50 years ago this June 1st when The Beatles’ John Lennon, Paul McCartney, George Harrison, and Ringo Starr astonished and delighted the world, ushering in the Summer of Love with Sgt. Pepper’s Lonely Hearts Club Band, a groundbreaking masterwork that became popular music’s most universally acclaimed album. To salute the occasion, The Beatles will release a suite of lavishly presented ‘Sgt. Pepper’ Anniversary Edition packages on May 26 (Apple Corps Ltd./Capitol/UMe). The album is newly mixed by Giles Martin and Sam Okell in stereo and 5.1 surround audio and expanded with early takes from the studio sessions, including no fewer than 34 previously unreleased recordings.

“It’s crazy to think that 50 years later we are looking back on this project with such fondness and a little bit of amazement at how four guys, a great producer and his engineers could make such a lasting piece of art,” says Paul McCartney in his newly-penned introduction for the ‘Sgt. Pepper’ Anniversary Edition.

“‘Sgt. Pepper’ seemed to capture the mood of that year, and it also allowed a lot of other people to kick off from there and to really go for it,” Ringo Starr recalls in the Anniversary Edition’s book.

For Record Store Day on April 22, Apple Corps Ltd./Capitol/UMe will release an exclusive, limited edition seven-inch vinyl single of The Beatles’ “Strawberry Fields Forever” and “Penny Lane,” among the first songs recorded during the ‘Sgt. Pepper’ sessions, which began in November 1966. Rather than being held for inclusion on the album, the two songs were released as a double A-sided single in February 1967. Amidst intense media speculation about the band’s next move, the single bridged what was then considered a long gap between the Revolver album, released in August 1966, and ‘Sgt. Pepper,’ which followed 10 months later.

This is the first time Sgt. Pepper’s Lonely Hearts Club Band has been remixed and presented with additional session recordings, and it is the first Beatles album to be remixed and expanded since the 2003 release of Let It Be… Naked. To create the new stereo and 5.1 surround audio mixes for ‘Sgt. Pepper,’ producer Giles Martin and mix engineer Sam Okell worked with an expert team of engineers and audio restoration specialists at Abbey Road Studios in London. All of the Anniversary Edition releases include Martin’s new stereo mix of the album, which was sourced directly from the original four-track session tapes and guided by the original, Beatles-preferred mono mix produced by his father, George Martin.

Deluxe Vinyl: Expanded 180-gram 2LP vinyl package features the new stereo album mix on the first LP and adds a second LP with previously unreleased complete takes of the album’s 13 songs, newly mixed in stereo and sequenced in the same order as the album.

– “A splendid time is guaranteed for all” –

The album’s vibrant artwork, including its extravagant Pop Art cover which finds The Beatles surrounded by a crowd of heroes in a 3D collage, was created by Peter Blake and Jann Haworth in collaboration with the band. The original artwork is showcased across the suite of Anniversary Edition releases, including the album’s pull-out sheet of ‘Sgt. Pepper’ cutouts. Housed in a 12-inch by 12-inch box with lenticular artwork and two bonus posters, the six-disc Super Deluxe set is presented with a 144-page hardcover book. The book includes new introductions by Paul McCartney and Giles Martin, and chapters covering comprehensive song-by-song details and recording information, the design of the cover, the album’s musical innovations and its historical context by Beatles historian, author and radio producer Kevin Howlett; composer and musicologist Howard Goodall; music producer and writer Joe Boyd; and journalists Ed Vulliamy and Jeff Slate, illustrated with rare photographs, reproductions of handwritten lyrics, Abbey Road Studios documentation, and original ‘Sgt. Pepper’ print ads. The Deluxe 2CD digipak is slipcased with a 50-page booklet abridged from the box set’s book, and the 2LP Deluxe Vinyl is presented in a faithful reproduction of the album’s original gatefold jacket.

Just as many ideas are sparked by chance, ‘Sgt. Pepper’ first sprang from a conversation between Paul and Beatles roadie Mal Evans on an airplane, when Mal’s request to pass the salt and pepper was misheard by Paul as “Sgt. Pepper.” The concept of who such a figure could be took root in Paul’s mind, blooming with the imagination of The Beatles as an Edwardian era military band — “Sgt. Pepper’s Lonely Hearts Club Band.” The Beatles’ creative wellspring for ‘Sgt. Pepper’ also flowed from such myriad sources as The Beach Boys’ Pet Sounds album, a Victorian circus poster (“Being For The Benefit Of Mr. Kite!”), a TV commercial for breakfast cereal (“Good Morning Good Morning”), a picture drawn by John’s young son, Julian (“Lucy In The Sky With Diamonds”), a teen runaway reported in the news (“She’s Leaving Home’), and Hindu teachings (“Within You Without You”).

Using the standard four-track tape recording equipment of the day, The Beatles collaborated with producer George Martin to achieve “the impossible,” as they dubbed it, to go as far out as they could with arrangements and new technology to realize their collective vision for Sgt. Pepper’s Lonely Hearts Club Band. As George Martin described it, “We were into another kind of art form where you were putting something down on tape that could only be done on tape.” The Beatles clocked more than 400 hours in Abbey Road’s Studio 2 to record the album, wrapping sessions in April 1967.

Upon its release on June 1, 1967, Sgt. Pepper’s Lonely Hearts Club Band initially spent 148 weeks in the British chart, including a total of 27 weeks at number one. During its first U.S. chart run, the album held the number one spot for 15 of the 88 weeks it appeared in the Top 200. ‘Sgt. Pepper’ won four GRAMMY Awards®, including Album of the Year, and it remains one of the most influential and bestselling albums of all time. In 2003, the U.S. Library of Congress selected ‘Sgt. Pepper’ for the National Recording Registry, recognizing the album as “culturally, historically, or aesthetically significant.” ‘Sgt. Pepper’ tops Rolling Stone magazine’s definitive list of the “500 Greatest Albums of All Time.”