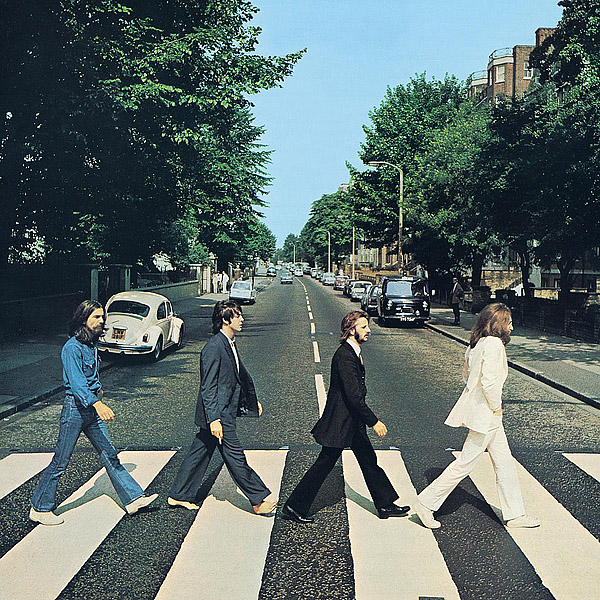 London – August 8, 2019 – It was 50 years ago today, on August 8, 1969, that the world’s most famous band stepped out from London’s EMI Recording Studios to stride, single-file, across the black and white stripes of Abbey Road’s nearby zebra crossing. With photographer Iain Macmillan balanced on a stepladder and one policeman stopping the street’s light traffic, The Beatles crossed back and forth three times, led by John Lennon, followed by Ringo Starr, Paul McCartney, and George Harrison. Just six photos were taken, with the fifth selected as the cover shot for The Beatles’ penultimate studio album, Abbey Road, named after the tree-lined street in which the studios are located. Released September 26, 1969, Abbey Road was not The Beatles’ final album, as Let It Be followed in 1970, but it was the last one John, Paul, George, and Ringo recorded together as a band. The Beatles will celebrate Abbey Road’s anniversary with a suite of beautifully presented packages to be released worldwide on September 27 by Apple Corps Ltd./Capitol/UMe. Now available for preorder, the album’s 17 tracks are newly mixed by producer Giles Martin and mix engineer Sam Okell in stereo, high res stereo, 5.1 surround, and Dolby Atmos, accompanied by 23 session recordings and demos, most of which are previously unreleased.

“The Beatles recording journey had gone through many twists and turns, learning curves and thrilling rides. Here we were – still wondering at the magic of it all,” McCartney recalls in his written foreword for Abbey Road’s anniversary edition packages.

This is the first time Abbey Road has been remixed and presented with additional session recordings and demos. The album’s sweeping new edition follows the universally acclaimed remixed and expanded anniversary editions of Sgt. Pepper’s Lonely Hearts Club Band and The BEATLES (‘White Album’) released in 2017 and 2018, respectively. To create Abbey Road’s new stereo, 5.1 surround, and Dolby Atmos mixes, Martin and Okell worked with an expert team of engineers and audio restoration specialists at Abbey Road Studios. All the new Abbey Road releases feature the new stereo album mix, sourced directly from the original eight-track session tapes. To produce the mix, Giles was guided by the album’s original stereo mix supervised by his father, George Martin.

“The magic comes from the hands playing the instruments, the blend of The Beatles’ voices, the beauty of the arrangements,” Giles Martin explains in his written introduction for the new edition. “Our quest is simply to ensure everything sounds as fresh and hits you as hard as it would have on the day it was recorded.”

Abbey Road’s Super Deluxe box set presents 40 tracks – including “The Long One” Trial Edit & Mix for the album’s epic Side 2 medley – on three CDs (stereo) and one Blu-ray disc (Dolby Atmos, 96kHz/24 bit high resolution stereo, and 96 kHz/24 bit DTS-HD Master Audio 5.1). The four discs are housed in a slip-sleeved 12” by 12” 100-page hardbound book with McCartney’s foreword; Martin’s introduction; insightful, in-depth chapters written by Beatles historian, author, and radio producer Kevin Howlett covering the months preceding The Beatles’ Abbey Road sessions, track-by-track details and session notes, the cover art and photo shoot, and the album’s reception upon its release; plus an essay by music journalist and author David Hepworth looking at the album’s influence through 50 years. The gorgeous book is illustrated with rare and previously unpublished photographs, including many taken by Linda McCartney; never before published images of handwritten lyrics, sketches, and a George Martin score; Beatles correspondence, recording sheets, and tape boxes; and reproduced original print ads. The Super Deluxe digital audio collection presents all 40 tracks for download purchase and streaming in standard and MFiT formats, as well as in high resolution audio (96kHz/24 bit) for download.

Abbey Road’s limited edition Deluxe vinyl box set features all 40 tracks from the Super Deluxe collection on three 180-gram vinyl LPs. The album’s new stereo mix LP is packaged in a faithfully replicated sleeve, with the two Sessions LPs paired in their own jacket, presented with a four-page insert in a lift-top box. The Deluxe 2CD set pairs the new stereo mix with versions taken from the session takes and demo recordings of its 17 songs, sequenced to match the album’s running order. The two discs are presented in a digipak with a 40-page booklet abridged from the Super Deluxe book. The album’s new stereo mix is also available in 1CD and 180-gram 1LP vinyl packages, for digital download in standard and MFiT audio, and on a limited edition picture disc vinyl LP illustrated by the album’s front and back cover art images.

Abbey Road’s Super Deluxe and Deluxe vinyl box sets’ 23 session and demo recordings are presented in chronological order of their first recording dates. “I Want You (She’s So Heavy)” leads the charge:

For an overnight session on February 22, 1969, The Beatles were joined at London’s Trident Studios by producer George Martin and engineer Glyn Johns to record “I Want You (She’s So Heavy).” Abbey Road’s new edition combines a take from that session with the concluding part of the Trident master’s eight-track reduction mix made later at the EMI studios, revealing for the first time Billy Preston’s thrilling overdubbed organ solo. With their amps turned up high, The Beatles received a noise complaint from one of the studio’s neighbors in the Soho area of the city. The take starts with Lennon exclaiming, “My boys are ready to go!,” before the band is told about the complaint. Lennon replies, “What are they doing here at this time of night?,” then lays it down: “Well, we’ll try it once more very loud. And then if we don’t get it, we’ll try it quiet, like it might do it the other way. OK. The loud one, last go. Last chance to be loud!”

In the same month that the raucous Trident session took place, McCartney recorded a home demo of “Goodbye” for the Apple-signed singer Mary Hopkin and Harrison recorded a solo demo of “Something” at EMI Recording Studios. Both demos are featured on Abbey Road’s new edition. “Goodbye” makes its release debut. Although previously released on Anthology 3 in a version featuring guitar and vocal, the new anniversary mix of George’s “Something” demo features for the first time vocal, guitar and piano.

The Beatles reconvened at EMI’s studios and Olympic Sound Studios for sessions spanning mid-April to early May. On April 14, Lennon and McCartney recorded the single “The Ballad Of John And Yoko” in EMI’s Studio Three, with Geoff Emerick as the balance engineer. Two days later, the single’s B-side, “Old Brown Shoe” was recorded. Session recordings for these tracks, as well as three more songs started during this period, “Oh! Darling,” “Octopus’s Garden,” and “You Never Give Me Your Money,” are featured in Abbey Road’s anniversary edition.

The remainder of Abbey Road’s sessions took place in July and in August with George Martin producing, and with principal engineers Geoff Emerick and Phil McDonald taking turns at EMI’s groundbreaking new mixing console, the TG12345. On July 2, 3, and 4, McCartney, Harrison, and Starr recorded “Golden Slumbers”/“Carry That Weight” as a medley (Lennon was hospitalized in Scotland, recuperating after a car accident). A sequence of Takes 1-3 from the first day’s session is featured in the anniversary edition. Take 9 from McCartney, Harrison, and Starr’s backing track session for “Here Comes The Sun” on Starr’s July 7 birthday is also included.

On July 21, 22, and 23, The Beatles were in-studio to record “Come Together,” followed by additional sessions on July 25, 29, and 30. The anniversary edition features Take 5. On July 23, The Beatles began recording “The End,” which, along with McCartney’s timeless couplet – “And in the end, the love you take / Is equal to the love you make” – features Starr’s only drum solo on a Beatles recording. Take 3 is included in Abbey Road’s new edition. The next day, just before the band’s 34-take session for “Sun King” and “Mean Mr Mustard,” McCartney cut a quick studio demo for “Come And Get It” – later a hit for the Apple-signed band Badfinger. The demo’s original 1969 stereo mix, made with McCartney and Lennon present in the control room, is released for the first time in the new edition, as is Take 20 from The Beatles’ “Sun King” and “Mean Mr Mustard” session. On July 25, two more songs, “Polythene Pam” and “She Came In Through The Bathroom Window,” were recorded as one for inclusion in the album’s epic medley. Take 27 from that session is featured on the new edition.

After Harrison had transported his rare and cumbersome Moog synthesizer to the studios, four songs received Beatle-played synthesizer parts: “I Want You (She’s So Heavy)” (Lennon), “Maxwell’s Silver Hammer” (McCartney), and “Here Comes The Sun” and “Because” (Harrison). This was a very early use of the newly-invented instrument on a pop record. George Martin wrote arrangements for several tracks that were recorded in Studio One toward the end of the sessions in August 1969. The original overdubbed recordings of Martin’s scores for “Something” and “Golden Slumbers”/“Carry That Weight” are included in Abbey Road’s anniversary edition.

August 20, 1969 was the last time The Beatles were together as a band at the EMI studios, for an evening session to compile Abbey Road’s master tapes. The album’s sides were sequenced, with “Come Together” opening Side 1, and with the medley of “You Never Give Me Your Money,” “Sun King,” “Mean Mr Mustard,” “Polythene Pam,” “She Came In Through The Bathroom Window,” “Golden Slumbers,” “Carry That Weight,” and “The End” placed on Side 2. “The Long One,” a different trial edit and mix of the medley, including “Her Majesty” (ultimately placed 14 seconds after “The End” as an unlisted, hidden track) is included in Abbey Road’s new edition.

A few weeks before Abbey Road’s release on September 26, 1969, Apple’s press officer Derek Taylor revealed that the album was “recorded at nice, workmanlike sessions which usually began at 2pm and continued until the end of the evening.” Millions of Abbey Road LPs were pressed at manufacturing plants around the world. The album was another blockbuster release for The Beatles, holding the No. 1 spot on the U.K. albums chart for a total of 17 weeks and topping Billboard’s U.S. albums chart for 11 weeks. For their work on Abbey Road, Geoff Emerick and Phil McDonald won the year’s GRAMMY Award® for Best Engineered Recording, Non-Classical. In 1995, Abbey Road was inducted into the Recording Academy’s GRAMMY Hall of Fame, recognizing “recordings of lasting qualitative or historical significance.” The Beatles’ best-selling studio album, Abbey Road’s universal popularity and influence have continued to grow since its debut.

Since Abbey Road’s release, the street’s zebra crossing has been one of the most celebrated and photographed sites in the world, protected as an historic landmark and visited by thousands of Beatles fans each year. Due to the success of The Beatles’ album, EMI Recording Studios was renamed Abbey Road Studios. Owned and operated by Universal Music Group, Abbey Road Studios is the most famous recording studio in the world and a global music icon.