This Never Happened Before

Those Were The Days

"Flowers In The Dirt" sessions with Mitchell Froom & Neil Dorfsman

Mixing "This One (Club Lovejoys Mix)"

Other singles from "Flowers In The Dirt"

“This One” is a single from Paul McCartney’s 1989 album, Flowers in the Dirt. The song reached number 18 on the UK singles chart. It also reached number 8 on the Ö3 Austria Top 40 in Austria, number 31 in the Dutch Top 40 in the Netherlands and number 40 on the Media Control Charts in Germany.

The single includes two songs recorded during the sessions for CHOBA B CCCP album: “I Wanna Cry” and “I’m In Love Again“. The later appeared in a slightly edited form than the version released on 1991 international edition of CHOBA B CCCP.

Like other songs from Flowers in the Dirt, despite the song’s modest chart success, to date it has not been included on any McCartney compilation album.

Allmusic called the song “lovely“. Rolling Stone opined:”This One,” likewise, extends its cute, lyrical conceit for too long and winds up taxing the listener’s patience“.

This song was released as a 7″ single, a 12″ maxi-single, and a CD single. All songs written by Paul McCartney exept where noted

The song is basically a love song – did I ever say I love you? And if I didn’t it’s because I was waiting for a better moment… ‘There could never be a better moment than this one…’, and the words ‘this one’ kept coming back to me as ‘this swan’, and I got off on that… The image… was like one of those Hare Krishna posters that I used to see a lot in India…this little blue god…Krishna, who’s riding on this swan floating over this beauti-fully clear pond with lovely pink lilies on it. It’s a very spiritual, tranquil picture, and although I don’t subscribe to any particular religion, I draw on the nice moments from a lot of them.

“That’s completely silly wordplay. My dad was very into words and crosswords and things, and so was I at school. And then becoming a songwriter I was interested in wordplay. So when I heard someone say, ‘This one,’ I thought it could also be ‘this swan.’ I liked this image of a swan, like in Hindu art—Krishna and the swan gliding over water lilies. I was attracted to that image, so that’s what it became, using the two meanings of the word. And then the video by Tim Pope turned out that way, too.”

Did I ever take you in my arms,
Look you in the eye, tell you that I do,
Did I ever open up my heart
Let you look inside.

If I never did it, I was only waiting
For a better moment that didn't come.
There never could be a better moment
Than this one, this one.
The swan is gliding above the ocean,
A god is riding upon his back,
How calm the water and bright the rainbow
Fade this one to black.

Did I ever touch you on the cheek
Say that you were mine, thank you for the smile,
Did I ever knock upon your door
And try to get inside?

The swan is gliding above the ocean,
A god is riding upon his back,
How calm the water and bright the rainbow,
Fade this swan to black.

What opportunities did we allow to flow by
Feeling like the time it wasn't quite right?
What kind of magic might have worked if we had stayed calm,
Couldn't I have given you a better life?

Did you ever take me in your arms
Look me in the eye tell me that you do?
Did I ever open up my heart,
Let you look inside?

The swan is gliding above the ocean
A god is riding upon his back
How calm the water and bright the rainbow,
Fade this swan to black.

This One / The First Stone

Figure Of Eight / This One (Club Lovejoys Mix)

See all official recordings containing “This One”

Concert From the concert in Rotterdam, Netherlands on Nov 07, 1989

See all bootlegs containing “This One” 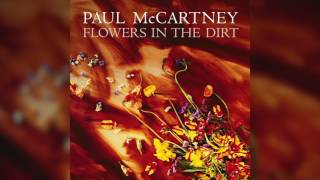 Latest concerts where This One has been played

See all concerts where “This One” has been played

Just a minor mistake to correct: The Club Lovejoys Mix's length is 6:10!

The PaulMcCartney Project 10 months ago

Thanks for noticing ! I have fixed this !