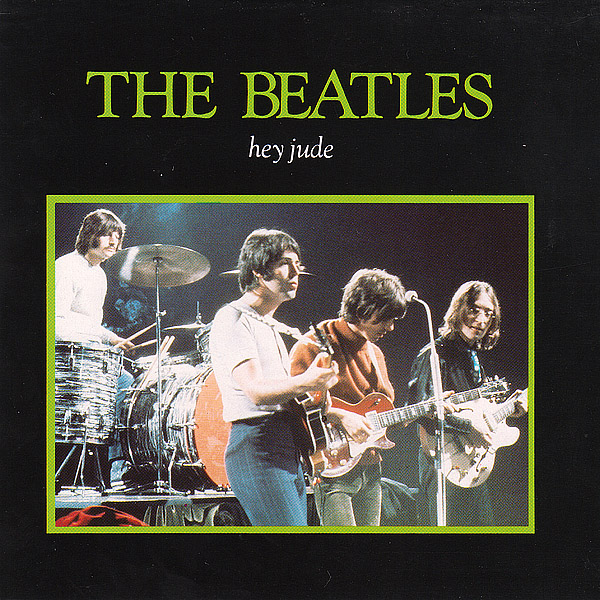 On August 7, The Beatles entered EMI Studios to work on George Harrison’s “Not Guilty“. The session ended in the early morning of August 8. Leaving the studio, Paul McCartney and his American girlfriend Francie Schwartz decided to go to the Apple Boutique (which was closed down a couple of weeks before) and paint “Hey Jude” and “Revolution” across its large, whitewashed shop windows.

The words were mistaken for antisemitic graffiti (since Jude means “Jew” in German), leading to complaints from the local Jewish community, and the windows being smashed by a passer-by.

I went into the Apple shop just before ‘Hey Jude’ was being released. The windows were whited out, and I thought: “Great opportunity. Baker Street, millions of buses going around…” So, before anyone knew what it meant, I scraped “Hey Jude” out of the whitewash.

A guy who had a delicatessen in Marylebone rang me up, and he was furious: “I’m going to send one of my sons round to beat you up”. I said, “Hang on, hang on – what’s this about?” and he said: “You’ve written ‘Jude’ in the shop window”. I had no idea it meant “Jew”, but if you look at footage of Nazi Germany, “Juden Raus” was written in whitewashed windows with a Star of David. I swear it never occurred to me.

I said: “I’m really sorry”, and on and on… “some of my best friends are Jewish, really. It’s just a song we’ve got coming out. If you listen to the song you’ll see it’s nothing to do with any of that – it’s a complete coincidence”. He was just about pacified in the end.

We thought we’d paint the windows for a gas. What would you do if your shop had just closed?

One evening Paul had suddenly decided to go down to Apple and paint the sotrefront windows white. Nobody saw us leave but by the time we had fingered “Revolution” and “Hey Jude” in web paint on each of the windows a few reporters had gathered outside, wanting to know who I was and were there any truth to the rumors. Next morning, the Daily Sketch ran two half-columns headed, “Paul and Francie paint the town white” Witty. Keen-eyed newsmen much have picked that item up here because when I got home to Newark the phone didn’t stop ringing, with reporters wanting tidbits about Paul, The Beatles, Apple. I wanted the phone cut off but it wasn’t my phone. After a week of telling them there was no story, I just hung up each time.

We had this empty shop, and I was in my office one day when Paul came in and said, ‘I’ve got an idea. We’ve got two plate glass windows in Baker Street, so, why don’t we get some whitewash and put the name ‘Hey Jude’ on the window in Baker Street, and the B-side, ‘Revolution’, on the window in Paddington Street. Well, will you fix it?’ So, I said, ‘Yeah, sure. When are you doing it?’ He said, ‘Tonight.’ So, I said, ‘Okay.’ But, a tin of whitewash isn’t the easiest thing to get when you’re living in the heart of London, but I got a tin of distemper, and some brushes. Paul said, ‘We’re going down to do it.’ So, I took them to the office and gave them the paint and brushes. Later that night, I was at home when, at about eight o’clock, the doorbell goes and there’s Paul wearing his long overcoat, splattered with white paint. He said, ‘Come on, you’ve got to come down. We’re having such a ball. I’ve had a different idea. Instead, we’re going to paint all the windows out white and then scrape out the letters.’ So, I went down, in T-shirt and jeans, and I found a bottle of Scotch and six cans of Coke. We did this and we finished at about midnight. We were giggling like school kids. We said goodbye and then, the following day, in the early hours of the morning, I got a phone call from the police, saying that the window of the shop in Baker Street had been smashed and they had got a guy for it. He was a Jewish guy and he had been coming home and he had pulled up at the traffic lights outside the shop. He had got with him, in his car, on the passenger seat, a loaded soda syphon bottle. At the lights, he glanced to the left and there he saw the words ‘Hey Jude’. He suddenly saw back to the Nazi regime from the Second World War, when they used to put signs on Jewish owned shops in Berlin. It all came back to him, and he jumped out of the car and threw this soda siphon straight through the window. Paul and I had never even given this a thought. Naturally, we didn’t press charges.