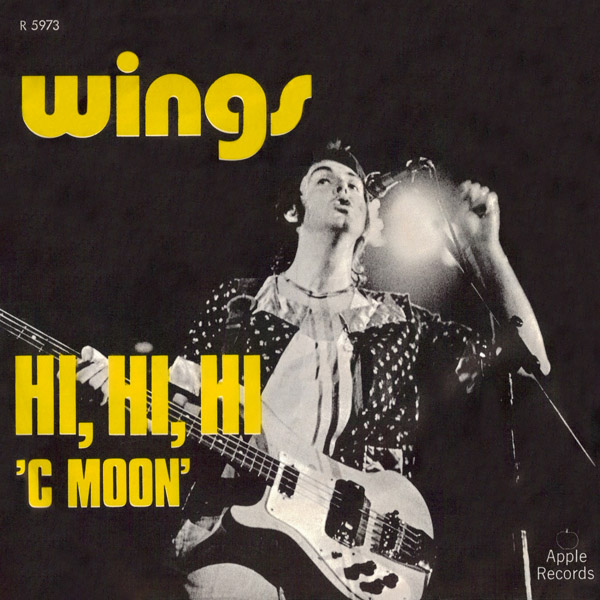 PAUL McCARTNEY’S Wings have again been clipped by the BBC. The group’s new single, out this week, and titled “Hi, Hi, Hi,” has been officially banned.

The BBC has taken offence to a naughty line reading: “I want you to lie on the bed and get you ready for my body gun – and do it, do it, do it. Like a rabbit, I’m gonna grab it til the night is done.“

Although the song managed to slip through the security net with a single play on last Thursday’s Tony Blackburn Morning Show – shortly afterwards a memo from executive producer Derek Chinnery went out to all Radio 1 producers warning that the song “was not suitable for airplay.”

McCartney fell foul of’ the BBC (and the GPO) last March with the Wings singles “Give Ireland Back To The Irish.” The BBC objected to “political connotations” and although it was never officially banned – individual producers were told to use “discretion” – the song was given no airplay.

McCartney retaliated with “Mary Had A Little Lamb,” an inoffensive ditty which met with no opposition.

The BBC rarely OFFICIALLY bans records. though the Beatles’ “A Day In The Life” was stamped unsuitable, as was “Wet Dream” by Max Romeo. Radio Luxembourg told Disc: “Far from banning it – we’ve made it our ‘Power Play’ of the week.“

PAUL McCARTNEY’S latest record, “Hi, Hi, Hi,” which goes on sale today, has been banned by the BBC because of its sexual connotations.

Paul, the 30-year-old former Beatle, wrote the song with his wife Linda – pictured with him yesterday – and recorded it with his group, Wings.

The ban was announced yesterday, only two days after the BBC banned. on similar grounds, a film clip of Chuck Berry singing his hit “My Ding-a-Ling.”

Afterwards, Paul said: “You’ll see more sexual stuff in an evening’s viewing on TV than you’ll hear on my record. I was dejected when I heard that the BBC had banned it. but I have decided not to change the words. I write what I feel.“

This is the third record by the Wings group. The BBC banned their first, “Give Ireland Back To The Irish,” because of its political content.