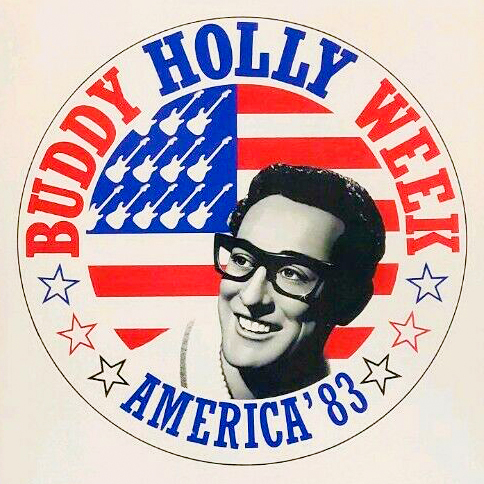 With Paul and his company MPL so busy with other projects at the moment, the eighth annual Buddy Holly Week, which ran this year from September 6-12, was a very low-key affair with no organised events and little media attention.

The memory of Buddy Holly is kept alive today both through the timeless quality of his music, and through Paul McCartney’s personal dedication to the commemorative Buddy Holly Week, which has been organised by MPL every September since 1976.

Although in previous years the celebrations of Buddy Holly Week were mainly centred around activities in Great Britain, this year for the first time it was the turn of America to stage the events, with a host of related happenings. In Lubbock, Buddy’s home town, the Buddy Holly Society organised a “Holly Hop”, a slide show and a Buddy Holly tribute concert. Local man Doug Nelson also organised a statewide “Buddy Holly Look Alike” contest, which was promoted by radio stations across the country. MPL produced special limited edition press kits (unfortunately no longer available) which were distributed to the media, while MCA contributed albums as prizes for various contests organised by radio stations.

Already afoot are plans for next year’s events, to commemorate Buddy’s 48th birthday. Paul and MPL are planning a special television documentary which will include film from the events over the past seven years’ Buddy Holly Week celebrations, a syndicated radio show and a national U.S. “Dance-a-Thon” which will be filmed and shown across the country.

From the press kit:

IN ENGLAND ‘BUDDY HOLLY WEEK’ HAS BEEN A REGULAR FEATURE ON THE ROCK CALENDAR SINCE 1976. IT ALL BEGAN WHEN I ORGANISED A PARTY TO CELEBRATE WHAT WOULD HAVE BEEN BUDDY’S 40TH BIRTHDAY ON SEPTEMBER 7TH, 1976.

ACTUALLY, IT REALLY BEGAN IN LIVERPOOL IN 1957 WHEN I FIRST HEARD BUDDY HOLLY’S ‘PEGGY SUE’. I WAS 15 YEARS OLD AND LIKE MILLIONS OF OTHERS A GREAT FAN OF BUDDY’S RECORDS. OVER THE YEARS IT SEEMS IRONIC THAT BUDDY HAS BEEN MORE POPULAR IN ENGLAND THAN IN HIS HOME COUNTRY WHICH IS WHY THIS YEAR WE HAVE DECIDED TO INAUGURATE AMERICA’S FIRST ‘BUDDY HOLLY WEEK’.

SINCE THE BEGINNING IT HAS BEEN GREAT TO SEE SO MANY YOUNG FANS ENJOYING THE SAME SORT OF MUSIC THEIR PARENTS DID.