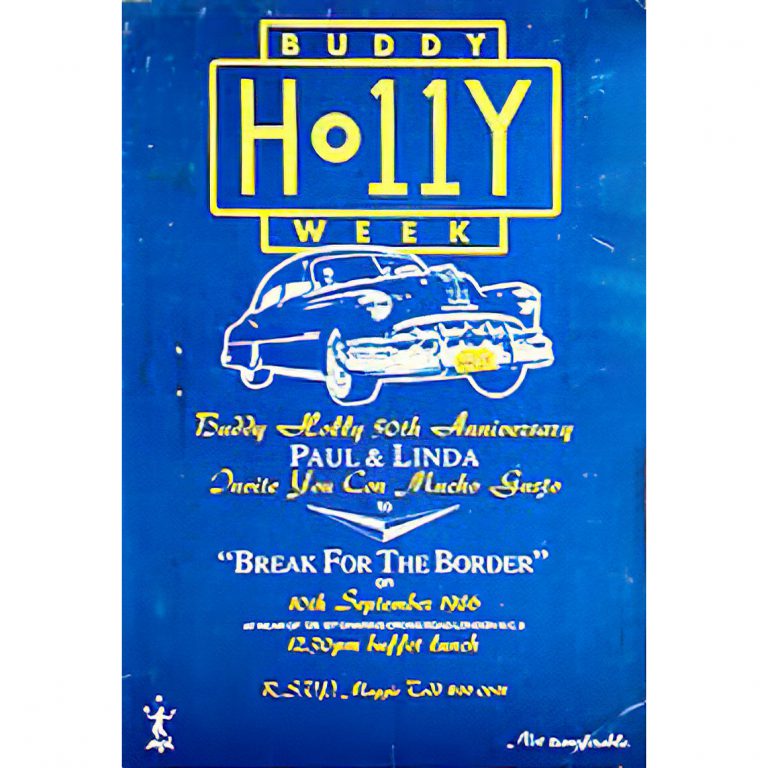 This was the 11th Buddy Holly Week (Buddy Holly would have been 50 this year). Most of the activities were held in Texas, but Paul & Linda hosted a luncheon in his honor at the “Break For The Border” restaurant in London, on September 10th, 1986.

Buddy Holly Week has been a major annual event these last ten years, but never more so than in 1986, when September 7th marked Buddy’s fiftieth birthday. Needless to say, some memorable celebrations took place in both Britain and America.
In the Old Country, MPL’s video The Real Buddy Holly Story was released by Picture Music International on September 1st at £16.99. The first 5,000 came with two audio cassettes (a video marketing first) and a blue plastic-covered ‘Buddy Holly 36-86’ aluminium number plate. Holly authority John Beecher and Alan Crowder of MPL chose the 28 songs for the cassettes imaginatively, so that all sides of Buddy’s talents are displayed. The bluesy instrumental ‘Holly Hop’ kicks off, followed by ‘Down The Line’ (rockabilly) and the straight country of ‘Door To My Heart’, stressing that the great man didn’t appear from nowhere with ‘That’ll Be The Day’. Other interesting selections are ‘Fool’s Paradise’, a favourite of Paul’s with its quaint organ sound, and ‘Real Wild Child’, sung by Ivan-the middle name of Crickets drummer Jerry Allison, known to his friends as ‘J.I.’.

Narration on the Story video is by Paul and an hour-long excerpt (edited down from an hour and a half) was broadcast by Home Box Office in the US on Buddy’s birthday. BBC TV repeated their Arena special, in effect an early version of the video but none the worse for that. Besides the reminiscences of Buddy’s colleagues and live TV footage of The Crickets, there is some fascinating colour film, most of it courtesy of Vi Petty. Vi played piano on ‘Ready Teddy’ and ‘Think It Over’, among others, and also provided the tape of Buddy chatting in the studio which is heard in the film. Release date of this video in the U.S. will be announced shortly.

British MCA issued a 12″ single of ‘That’ll Be The Day’, promoted by an excerpt from the MPL video. The BBC also repeated Buddy, a fairly grim drama series made originally for schools about an ageing teddy boy (Roger Daltrey) struggling to bring up his son Buddy (named after you know who) after his wife walks out; the Corporation also showed The Buddy Holly Story, starring Gary Busey. And of course there was the traditional MPL lunch in London on September 10th. Appropriately enough, this year’s venue was a Mexican restaurant, Break For The Border-among other descriptions, Buddy Holly’s music was sometimes called ‘thatTex-Mex sound’. Among the guests were Dave Edmunds, Alvin Stardust (see Cufflink), Noel Redding (once bass player in the Jimi Hendrix Experience), George Martin, Kate Robbins, two of the Young Ones comedy team and Chrissie Hynde of The Pretenders, plus TV-AM presenter Anne Diamond and recent heavy-weight contender Frank Bruno. All received the video package plus a T-shirt and badge.

Guest of honour was Jerry Allison, more bearded than ever. Four gold discs for ‘That’ll Be The Day’ had been made on MPL’s behalf and were now presented by Paul to a beaming J.I. The other three were for Joe B. Mauldin (Crickets bassist then and now), Niki Sullivan (rhythm guitarist in 1957, though he only sings on ‘That’ll Be The Day’) and Larry Welborn (bassist on the record, but replaced by Joe B. soon afterwards). In return, Jerry gave Paul a miniature replica of Lubbock’s famous Buddy Holly statue, one of only thirty statuettes made.

Back in Lubbock, they had spent the week from September 1st to 7th in fine style. The Nifty Fifties Car Club helped to get things going at the opening parade, which featured a fly-over by the US Air Force. On Tuesday 2nd there was rock ‘n roll at a venue called Fast and Cool, the first of three events in aid of the Muscular Dystrophy Association. ENCORE performed at 12 noon at the Courthouse Lawn Gazebo from Tuesday-Friday inclusive, a ‘sack lunch’ featuring each time. Then, to remind us that there’s more to Lubbock music than Buddy Holly, Wednesday featured the Ballet Lubbock (in Stradivarius To Saxophone) and the Lubbock Symphony Orchestra.

On Friday a Champagne Artists Reception ($100 by invitation only: proceeds to MDA) preceded the rocking Main Event, which featured Carl Perkins, Bo Diddley, The Crickets, Bobby Vee (a Holly devotee who made an album with The Crickets after Buddy’s death), Del Shannon and Buddy Knox of ‘Party Doll’ fame (Holly and The Crickets played on several of his records). Saturday saw a Walk Of Fame dedication ceremony at the Holly Statue, followed by a civic reception for The Crickets and Niki Sullivan, who then hosted an early evening autograph party. Star of that night’s concert was Joe Ely, a Lubbock native who gives country and rock ‘n roll his own personal twist and has several neat LP’s to his credit – try Musta Notta Gotta Lotta.

The Buddy Holly Memorial Society held a Memorial Service at Lubbock Cemetery on Sunday, followed by a BBQ and Birthday Cake at Studebaker’s. And then, to show that the Texans retain a sense of proportion, ‘The Greatest Music On Earth’ – gospel – in the Civic Centre Theatre. Lubbock had certainly done Buddy proud.

Had he lived, what would Buddy Holly have been up to at 50? Jerry Lee Lewis, Roy Orbison and Carl Perkins – to name three of his contemporaries – are still spirited performers, but Del Shannon and the reunited Everley Brothers are almost the only ones to produce striking original work in recent years. However, Holly’s self-discipline and progressive approach would surely have kept him to the fore in one role or another. An anecdote from Jerry Allison (featured in the video) reveals wisdom beyond Buddy’s years. After The Crickets’ first bout of intensive touring, he suggested they should take some time off to mess about on their bikes and generally have fun — after all, they could be dead tomorrow. At a time when a pop star’s popularity was expected to be brief (two years, perhaps), this took a cool head. This ability to step off the treadmill and follow his own path was later shared by The Beatles and would probably have protected him from the creative burn-out suffered by other ’50s stars chained to a punishing schedule.

Buddy Holly’s recorded legacy stands in sharper relief than ever in 1986. When a great artist’s work is presented afresh, it reveals still further pleasures: in Holly’s case, the arrival of the compact disc and the issue of a self-explanatory double album, Buddy Holly Rocks, by Charly Records have achieved this in their different ways. The reissue of the Complete Buddy Holly box gives new listeners a chance to delve deeper. Like millions before them, they will discover that this is one posthumous cult rooted in sheer talent and artistry.