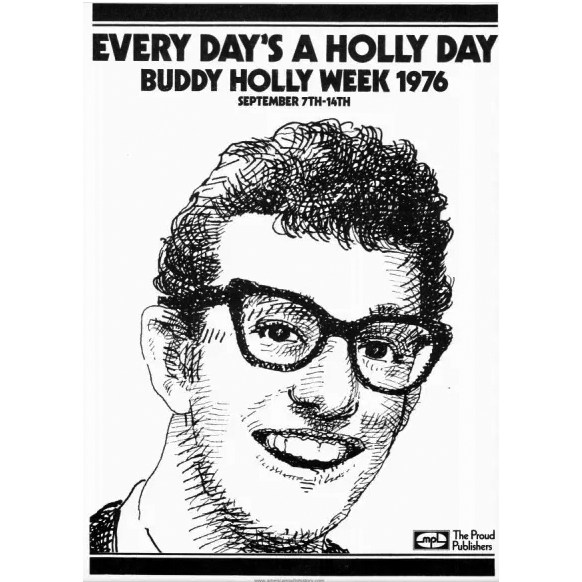 On September 7th, 1976, Buddy Holly would have had 40 years old. Paul McCartney being a fan of the man, and owning his publishing rights, decided to organize a Buddy Holly Week (from September 7th to 14th) to remember and celebrate; this would become a yearly event, always starting on the September 7th, organized till 1999.

On the opening day of the Week, a luncheon was organized at the Orangery in Holland Park, London, with Norman Petty, Buddy Holly’s manager, co-writer and producer, as the guest of honour, and invitees such as Denny Laine, Elton John, Eric Clapton, Roger Daltrey, Queen, 10cc…

Roger and Heather Daltrey (left) and Paul and Linda McCartney were not just out for a typically British stroll. They had joined other stars like Elton John and Eric Clapton at a luncheon in honor of the late American rock pioneer Buddy Holly. The gathering, organized by a newly mustached McCartney, coincided with what would have been Holly’s 40th birthday (he was killed in a 1959 plane crash) and kicked off Buddy Holly Week throughout Britain. Explained Elton, an impressionable 11 when Holly died: “He was one of my earliest heroes”