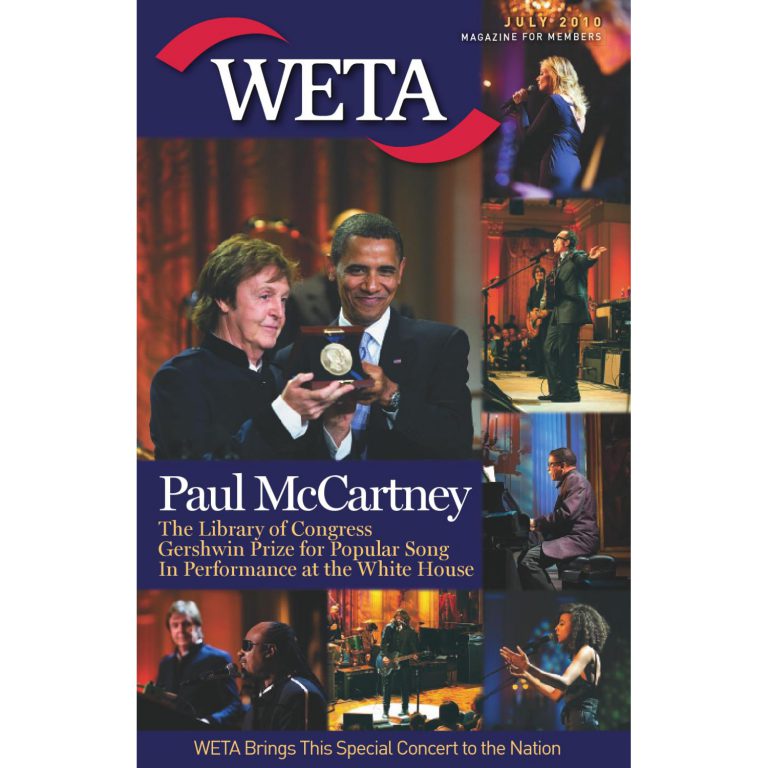 Paul McCartney’s June 2nd concert at the White House is broadcast on US TV PBS on this date.

Last week the focus returned to one particularly high profile (to put it mildly!) Macca fan on the 28th July when PBS broadcast Paul’s recent show at the White House as part of its In Performance at the White House series. As if we need we to tell you again but in June, Paul had played one of his most memorable gigs yet in the East Room of the President’s home after being awarded the Gershwin Prize for Popular Song. In front of a crowd including Dave Grohl, Elvis Costello, The Jonas Brothers, Jack White and Barack Obama himself, of course, Paul sang ‘Michelle’ to the First Lady, performed ‘Ebony and Ivory’ live with Stevie Wonder for the first time and even led a star-studded sing-a-long of ‘Hey Jude’ with the Obama family joining him on stage. As if the gig itself wasn’t extraordinary enough, the coverage of the concert on television was simply mind-blowing. The show was reviewed and featured as Pick of the Week in papers across the board including Los Angeles Times, The Philadelphia Enquirer, The San Francisco Chronicle and New York Daily. The prestigious USA Today even declared, The affection is well earned and the cultural impact indisputable. So please allow your children, parents or grandparents, whatever the case may be, to bop along in peace.

WASHINGTON, D.C. — “Paul McCartney: The Library of Congress Gershwin Prize for Popular Song In Performance at the White House” is a PBS music special in the White House East Room that WETA will produce in association with the Library of Congress, Mark Krantz Productions and CoMedia.  President and Mrs. Obama will host the concert event on June 2 in honor of musician Sir Paul McCartney’s receipt of the Library of Congress Gershwin Prize for Popular Song.  The evening will include performances by McCartney himself and Stevie Wonder, Elvis Costello, Jonas Brothers, Herbie Hancock, Corinne Bailey Rae, Dave Grohl, Faith Hill, Emmylou Harris, Lang Lang and Jack White, with remarks by Jerry Seinfeld.  (Program subject to change.)  President Obama will present the Gershwin Prize to McCartney during the event.  The ninety-minute music special, part of the PBS “In Performance at the White House” series, will feature the concert event, as well as behind-the-scenes footage and interviews.  The program airs Wednesday, July 28 at 8 p.m. ET on PBS stations nationwide, followed by an encore presentation at 9:30 p.m.  (Check local listings.) […]

“WETA is proud to bring this concert to the American people in collaboration with the White House,” noted Sharon Percy Rockefeller, president and CEO of WETA.  “This event marks the forty-fourth production of the WETA ‘In Performance at the White House’ series and it is our continuing delight to share these rich cultural experiences with the wide public television viewing audience.” […]