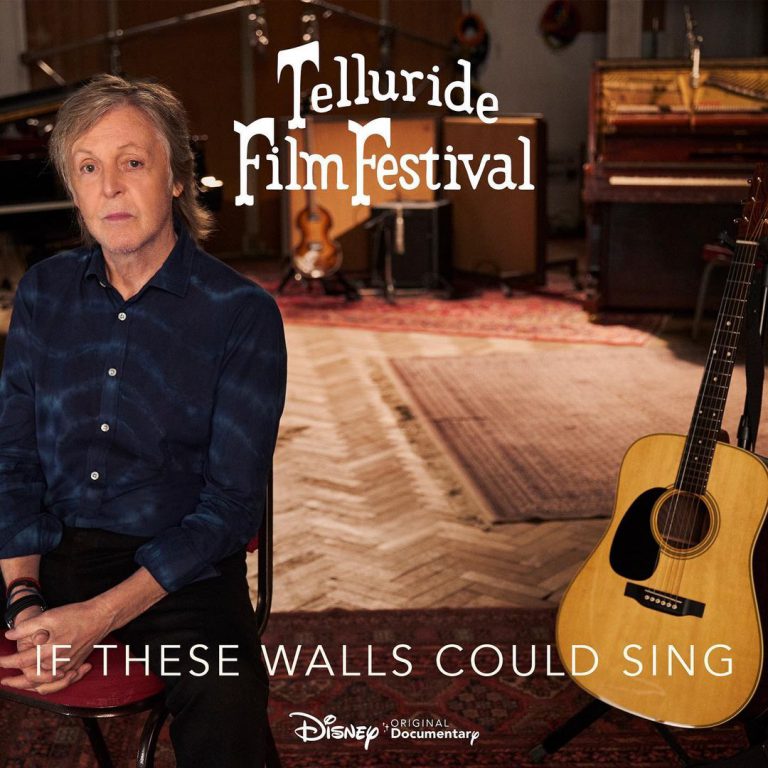 Mary McCartney to direct a documentary about Abbey Road Studios

“If These Walls Could Sing” is a documentary about the story of the Abbey Road Studios, directed by Mary McCartney, and featuring several interviews with his father, Paul McCartney. It was announced in January 2021 and premiered in September 2022 at the Telluride Film Festival, a film festival held annually in Telluride, Colorado during Labor Day weekend (the first Monday in September).

Making this documentary was an incredible opportunity to learn more about somewhere I have grown up and have great affection for. To highlight and celebrate the place, the music and the talent that have made the studio what it is, through their creativity and innovation, was an honor. I’m thrilled to partner with Disney Original Documentary, so we can invite the audience into Abbey Road, to experience the magic that has been created within its studios over the last 90 years.

Mary McCartney – From What’s On Disney Plus (whatsondisneyplus.com), September 2

Mary McCartney’s joyful celebration of the Abbey Road Studios examines how the independent space has nurtured some of the most celebrated and influential recordings in classical, rock, Afrobeat, and film soundtrack history. McCartney intersperses vibrant footage — early symphonic recordings, a scene with a passionate Jacqueline du Pré, energetic shots of Fela Kuti — with interviews from a who’s who of alumni and their vivid memories of making music in Studios One, Two and Three. Memorably, we see George Martin moving the dials for four wide-eyed young men from Liverpool (including Mary’s father Paul), as he helped craft The Beatles sound that defined rock history, and Elton John before Elton John, as a session musician for The Hollies. McCartney weaves an intimate tribute to memory, to spaces that inspire creativity, and to the ongoing flow of music from beloved and emerging artists. –FA (U.K., 2022, 86m) In person: Mary McCartney

Mary McCartney – in the opening interview with her father

Vanity Fair: We’re showing a clip from the film of you talking with your dad about Jet the pony. I love that photo of them on the famous Abbey Road crosswalk. And you even say that it helped inspire this documentary. Can you tell me more about it?

Mary McCartney: Yeah, I’m a photographer. That’s been my main career and moving to directing felt like a natural progression. I’ve never done a feature documentary. And I was starting to think I’d like to do one. And then I had a message from a friend of mine who’s a brilliant documentary producer, John Battsek [Oscar-winning producer of the documentaries One Day in September and Searching for Sugar Man.] He said, “Would you do a documentary about the history of Abbey Road Studios?” And I was a bit like, “Ohhhh, I’m not sure for my first documentary that is right.”

It was too close to the family?

It felt too close. I still work closely on my mother’s archive, so I messaged the woman that runs that at my dad’s office and I said, “Have you got any photos of me at Abbey Road?” And she instantly texted me back the pictures that are at the front [of the film] and I just thought, “I’m going to have to do this documentary.”

And the pony photo came with that?

Then I remembered when I was young, my mom loved horses so much. We had horses, not in London, but she would get to have them visit for the day from the livery stable. And I remember her taking this horse, Jet, as they were crossing and seeing that picture and just thinking, “Oh my God. I mean, obviously I have to do this documentary.” So then I phoned my friend John and I said, “I’m in.”

I know the documentary goes well beyond Paul and The Beatles, but I love that this was a personal entry point. I felt like I got to know you a little better as it was starting. And then you were the guide to this world.

I didn’t want to over overplay it. I am passionate about Abbey Road as a place because I do think a lot of people don’t have the opportunity to go there. When you do get to walk into Abbey Road, I do believe people get this feeling. It is sort of a spiritual experience and the studios still have the atmosphere that they had from when they opened 90 years ago. I want to make it an emotional experience as a documentary, rather than doing all the historical points. I didn’t want it to feel like a lesson. I really, really hope the viewer falls in love with it.

The Abbey Road album, of course, connects us to Abbey Road Studios because everybody knows the album. But this photo of Paul was interesting because it’s the same place, but a different time than when that album cover was taken. It’s during the Wings era. And he’s walking back the opposite way. It felt very symbolic in that way. And it’s a horse instead of John Lennon. [Laughs.]

Yeah, it’s comical! It’s like a new start, isn’t it? It’s like he’s with his wife, they’ve fallen in love and they’re obsessed with animals. And they’re going to break the rules a little bit by taking a horse into Abbey Road Studios. But also, I wanted to open on that zebra crossing because it is a place of pilgrimage for so many people. […]

I wish you luck as you take this to Telluride. The last question I have for you is, whatever became of Jet the pony?

Jet was our pony for a very long time. He was named after the  [1973] song. He was a feisty little pony who we rode and loved. But it all comes back. I mean, that’s a very unusual photo. And I loved the idea that by doing this documentary, I have been able to show the world one of my favorite photographs, which is my mother taking our pony across the zebra crossing to the studio. I just think it shows her character to a T and what a rule-breaker she was.