Destiny: Music of the Spheres

Disc And Music Echo Presents "Sounds Of The Stars"

Who Wants To Live Forever

You Have Been Loved

Make Me A Channel Of Your Peace

Don't Dream It's Over

Love Minus Zero / No Limit

Love Theme From "A Star Is Born" (Evergreen)

I'll Be Missing You

Because You Loved Me

Prayer For The Dying

Wish You Were Here

How Could An Angel Break My Heart

Love Is A Beautiful Thing

I Am In Love With The World

The double CD released on 2 December 1997 brings together 36 songs from some of the biggest names in several genres of music, who dedicate both well-known and brand new material to the memory of Diana, Princess of Wales who had died just 3 months earlier on 31 August 1997. […] 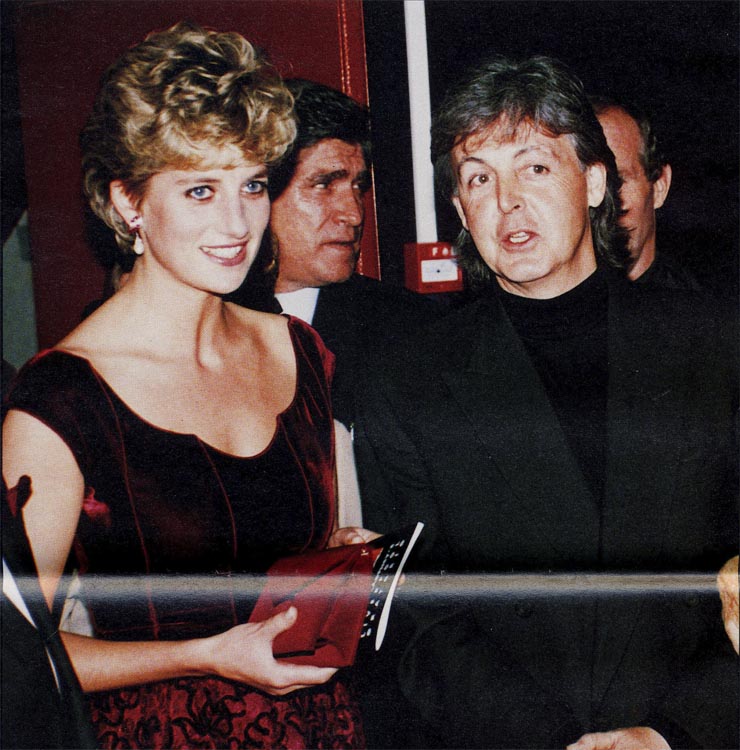 Rarely in the sadly short life of Diana, Princess of Wales, could she truly hide from the flock of paparazzi. Although she met Paul and Linda on several occasions, it was almost always in the attendant arc of the camera flash.

But one day in early 1993, during the McCartneys’ rehearsals at Pinewood Studios for The New World Tour, Diana managed a short escape. Paul, Linda and the Band were filming run-through after run-through when they were told that they had visitors: Diana, and the Princes William and Harry.

Paul stopped the filming and, on hearing that the boys “wanted to hear some rock and roll”, kicked the band through an impromptu and blistering set.

Then we broke for lunch. Paul and Linda took a table at Pinewood’s restaurant. It was a paparazzo’s dream shot: there, at one table, were Paul, Linda and their daughter Mary, Diana with William and Harry, as well as David Puttnam and Robin Williams, who were also filming at the studio.

In memory of Diana here is a photograph to remind of happier times, taken in Lille, France, in November 1992 at a performance of Paul McCartney’s Liverpool Oratorio. With respect to Diana and everyone else’s right to privacy, we are not showing the Pinewood picture, a shot that no one apart from those present has a right to see.