There is a little one called Appreciate which is soft of a weird little track I mean, that was a great one to make, because we kind of layered it and built it up and at the end of it I got to play this slide guitar solo. The amp of the guitar was so hot that it kind of played itself, so I have particular memories of that.

I had a mess around on an auto-tuner. I knew all my mates would go… People I knew were going: ‘Oh, no. You can’t do that.’ Because of that, I’d never even gotten near one. But I went to see Kanye and he’s using one live, and I thought: ‘You know what, that’d be fun.’ On this Appreciate track I did some stuff, but in the end we didn’t use it.

With things like Appreciate, we had all these tape loop sounds that he’d brought in, and guitar loop sounds. And we started chopping it all together into this big collage, and I remember saying to him at one point, ‘We should and make this into a song’, and he just gave me this look, like, ‘You’re so Boring!’. Then we found this chorus that he’d done previously, over something completely different, and we spliced that together and it all just worked. That’s one of my favourite tracks on the album, I listen to it in a lot of different ways.

May 16th, 2014 – Paul McCartney teams up with Newman the robot for his NEW video ‘Appreciate’ & Japanese tour dates

Paul McCartney has collaborated with some of the biggest names in the world. In recent years his videos have featured a stellar line up of guests including Meryl Streep, Johnny Depp, Kate Moss, Jude Law, Tom Ford, Sean Penn and Natalie Portman.

Today, Paul announced his first artistic collaboration with a robot. Newman, the robot, has teamed up with Paul for his new music video for the song ‘Appreciate’. ‘Appreciate’ is taken from Paul’s latest studio album ‘NEW’, which was launched last year.

The video sees Newman on patrol in a museum of humans. Newman is drawn to one exhibition in particular. In a dimly lit sound studio he sees Paul McCartney sitting on a stool holding his iconic hofner bass guitar. Paul twitches making a sound on the guitar and to Newman’s astonishment he starts to come to life as the song ‘Appreciate’ starts up. Paul comes closer to Newman staring at him through a force field that encloses him. Newman reaches through the force field and pulls Paul out of his exhibition. As the two of them move around the museum all the exhibitions start coming to life too.

Speaking about Newman Paul said: “I woke up one morning with an image in my head of me standing with a large robot. I thought it might be something that could be used for the cover of my album NEW but instead the idea turned out to be for my music video for ‘Appreciate’. Together with the people who had done the puppetry for the worldwide hit War Horse we developed the robot who became Newman.”

The video was premiered exclusively in Japan this week where Paul and his band will be performing to sold-out crowds in Tokyo and Osaka. Newman will also be joining Paul on this leg of his tour.

The video was directed by Andre Chocron and filmed in London. Newman was designed by Mervyn Millar and Ed Dimbleby for Significant Object Ltd

She says you don’t give back what you take
She got evidence you don’t appreciate her love
Oh yeah
She says it’s all a show and no-go
You drop everything, give back
Reciprocate her love

She says you don’t give back what you take
She got evidence you don’t appreciate her love
Oh yeah
She says it’s all a show and no-go
You drop everything, give back
Reciprocate her love 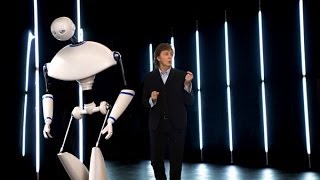 “Appreciate” has been played in 1 soundchecks.