Other songs covered during January 3, 1969 session

Going Up the Country

Blowin' In The Wind

When You're Drunk You Think Of Me

What Do You Want To Make Those Eyes At Me For?

“Hitch Hike” is a 1962 song by Marvin Gaye, released on the Tamla label. Another song Gaye co-wrote (this time with Clarence Paul and William “Mickey” Stevenson), this time instead of confessing to being stubborn, the singer is now hitchhiking on the look out for his girl, whom he feels has run so far that he has to travel “around the world” thinking of places she could have found herself at including St. Louis, “Chicago City Limits” and “L.A.”

The song sparked a brief dance craze when audience members from American Bandstand performed the “hitch hike” dance. Marvin performed the song on the show and also did the move onstage. The dance was also performed during Marvin’s performance of the song in the T.A.M.I. Show. The single was successful enough to land Gaye his first top forty pop single in 1963 with “Hitch Hike” reaching number thirty on the pop singles chart while reaching number twelve on the R&B singles chart. Again, like “Stubborn”, Martha and the Vandellas accompanied Gaye on this song. Artists including The Sonics, The Rolling Stones, The Mothers of Invention and Alice Cooper covered this song during their early years. […]

Paul McCartney performed a live cover of the song during his 2011 performance at Comerica Park in Detroit, Michigan. Another song which is likely based on “Hitch Hike” is “You Can’t Do That” by The Beatles, especially the use of cowbell and congas and the pronounced stops at the end of each verse. […]

On the second day of the “Get Back” sessions (January 3rd, 1969), The Beatles played a version of “Hitch Hike“, with Paul McCartney singing harmony vocals along with John Lennon. 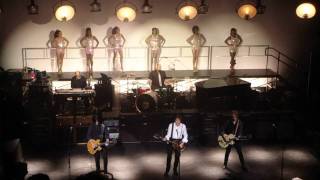 “Hitch Hike” has been played in 5 concerts and 1 soundchecks.

Latest concerts where Hitch Hike has been played

Live At The Apollo