Subtle colours merged soft contours
stretched in welcome as the ship drew near.
His first bare step on mustard sand
was wiped by whim of wave.

He stalked through swelling heather
to the ridge's tip to sip
the fresh world's news.
Flanked by juniper and birch
a long flung track strung out below,
and wound to smoky settlement,
nested in blue foothills.

Two natives drove a flock of umber sheep
along this burnt sienna road.
A beautiful woman, from whose throat
the haunting song had come.
A bearded man with snowish hair, her father,
who had witnessed his arrival in a ship of glass
that disappeared as fast as it had come.

These companions walked with his joy
towards the settlement and spoke
of how they'd long expected him.
Still as stones that lined their path
this shepherd's daughter listened to his story.
Her father sang of local life and introduced
each character and scene.
Farmer, warrior, milkmaid, thief,
shaman, housewife, woodsman, fool.
They made him welcome and, before he slept
agreed to help him hoist his stone.

On sun smacked days they traced his steps
to plant a giant slab of sea beat rock.
Rope and muscle, sweat and tackle
raised a weathered finger to the sky.
Soon this sacred stone bedded in its depths
the aspirations of their anxious souls.
A place of peace where he and she would meet.

But as their hearts rehearsed and played a set
of new found harmonies and chords,
black horse rider rode throughout the night
with news that set the settlement alight.
Off ragged Northern coast
a rugged gang of bandits gathered.
Dark longships flashed with metal.
Thud of boot, belt, hull and oar,
a storm of fighters swarmed ashore.

Panic scampered through the peoples' veins.
Poisoned rats in a pot of grain.
The visitor fell still to seek an answer.
The shepherdess, his love,
took him
to the standing stone
and poured an ancient potion.

She left him to his slab of stone.
He watched its towered rush
scratch at the moon.
Fanned flames flicked up tongues.
Lichen crawled with lunar cloud reflections.
As rampant hoards rode tidal waves of
blood red water
down centrifugal highway
he was tossed and smackly landed
on the sudden floor.

He looked up and saw
a spirit force stretch easy into space
so powerful he trembled and believed.
Head bowed he slipped in trance wet sheets.
Slow whirlwind, silent thunderstorm,
and breezeless hurricane. He cried out.
A wall of peeled back veils revealed
a face unlike another.
Visions, visage, gentle, genteel,
Masculine mouth, female eyes.
A face to steal.
The mouth spoke, slower than words.

"You were sent to help the people here.
Their invaders greatest fear
is that the sky will fall.
Say you'll make this happen
and in two days time the moon will be eclipsed."

Awake he found himself
a crumpled scrap beneath
the upright stack of stone.
Black clouds rolled the moon.
As milkmaid warriors made futile preparations
to defend against attack
their newcomer was welcomed back
with sceptical acclaim.
He told to those who would be told,
then rode
into the enemy domain.

Deriding scowls lined his arrival.
Wolf eyes soldier drunk, with stagnant breath,
press to hear his threat
to make the sky collapse
unless their troops retreat.
The leader's belly heaved, he laughed and spat:
"before I skewer and feed you to these apes
go tell your tribe, within three days they'll be my slaves."

Thunder tore apart a sheet of sky.
Hard laughter swallowed dust
as hero sped to anxious settlement.
The villagers made crude defences
huddled in a circle round the stone.
Lambs listened for the dog pack howl.
Long blown hours scattered charcoal grey
above the rag-bag armies' quickened pulse.
A sudden moon illuminates.
They crouch with bucket, beam, and bench
in fortress ring until
night sang
jang of juggernaut's approach.
"I will make the sky collapse…"
First person sprang and roared
"unless you take your army back"
Some stumbled, stopped,
but most slunk on, shamed
by their leaders mocking curse.
The sky grew black magnetic.
Black air cracked electric.
A drape was dragged across the moon.
In howling darkness some trampled, tripped,
but all ran, chased by children to the laughing sea. 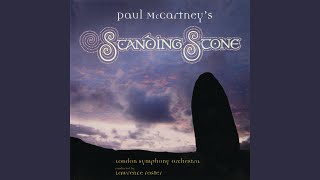