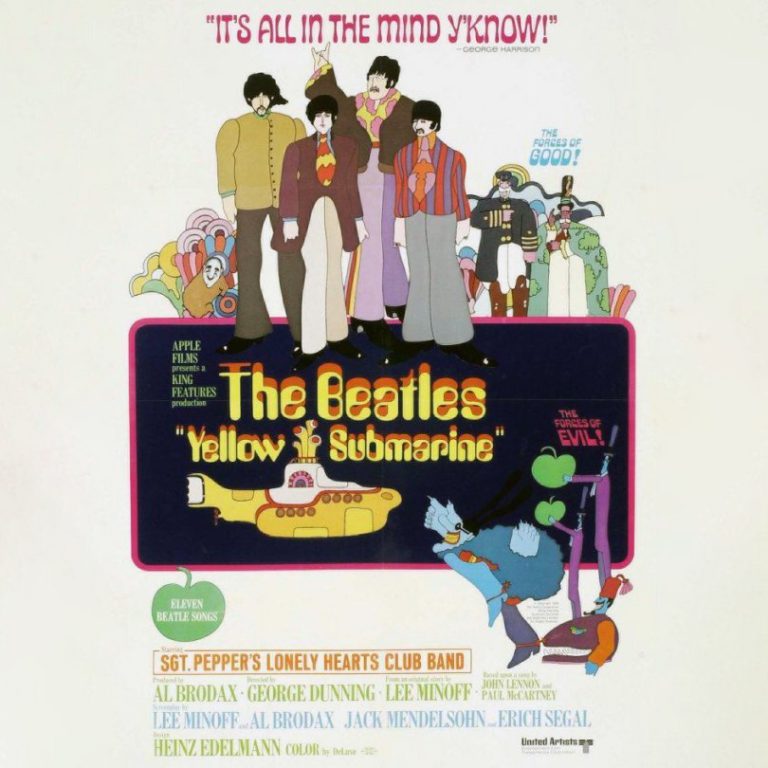 On this day, The Beatles, minus John Lennon, attended a press preview of their forthcoming animated movie, “Yellow Submarine“. The film screening and press reception took place at the 102-seat theatre named Bowater House Cinema in Knightsbridge, London.

It was the first time any of The Beatles saw the completed film. After the screening, they gave interviews and were photographed, posing with a cardboard cutout of John Lennon’s cartoon incarnation, as well as standing next to a life-sized Blue Meanie.

How much do we see you in Yellow Submarine?

Paul: We’re just in it as drawings, and it’s like us animated going through it, you know.

Did Mystery Tour put you off making a film completely yourselves?

George: Yeah, we’re only ever going to be cartoons forever now, ‘cos that really put us off, those no damn good critics.

The cartoon, I believe, makes a bit of fun of the Maharishi. Does this mean that you have finished with him now?

Paul: It’s not finished with him, but we’re over the phase, it was a bit of a phase, but he’s still a nice fellow and everything’s fine. But, we don’t go out with him any more. […]

Tell us about The Beatles’ new album

Paul: I am pleased with its progress. We get new ideas every day, but I hope it will be made quicker than the Pepper album. We want it out before the Yellow Submarine LP comes out. We are family grocers. You want yoghurt; we will give it to you. You want cornflakes, we have that too. Mums and dads can’t take some of our album stuff, so we make it simple for them on our singles. […]

Paul, tell me about Mary Hopkin, the singer from Wales you’ve just signed to Apple.

Paul: She sings too much like Joan Baez, but we’ll alter that, and get some good songs for her. No, I won’t write them. There are already some really good ones. Yes, she will be big. We’ve got to be positive about that.

Paul: Dylan’s lyrics have infinitely more worthwhile poetry about them than the nauseating words of songs that Sinatra sings. I used to think that they were great, but now, they are so much [French swear word].

From “The Beatles: Off the Record” by Keith Badman