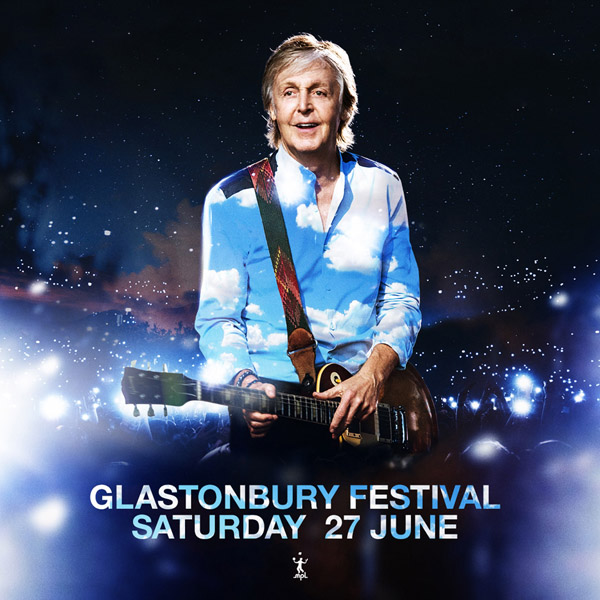 Due to the on-going 2019-2021 coronavirus pandemic, Glastonbury festival decided to cancel its 2020 edition. From Glastonbury Festival website, March 18, 2020:

We are so sorry to announce this, but Glastonbury 2020 will have to be cancelled, and this will be an enforced fallow year for the Festival.

Clearly this was not a course of action we hoped to take for our 50th anniversary event, but following the new government measures announced this week – and in times of such unprecedented uncertainty – this is now our only viable option.

We very much hope that the situation in the UK will have improved enormously by the end of June. But even if it has, we are no longer able to spend the next three months with thousands of crew here on the farm, helping us with the enormous job of building the infrastructure and attractions needed to welcome more than 200,000 people to a temporary city in these fields.

The participation of Paul McCartney to this 2020 edition was teased throughout 2019 (and even before), before an official announcement in November that he was going to be one of the headliners.

Sir Paul McCartney has hinted he could perform at the Glastonbury Festival for its 50th anniversary next year.

The former Beatle, who last played the Pyramid Stage in 2004, said he was “starting to think about” it.

In April founder Michael Eavis told the BBC that Sir Paul might return, “hopefully for the 50th“.

Sir Paul said: “People are saying that it will be good if I did it, so I’m starting to think about whether I can or whether it would be a good thing. My kids are saying, ‘Dad, we’ve got to talk about Glastonbury’, and I think I know what they mean. We played there quite a long time ago so maybe it is time to go back. I don’t know. I’d have to put a few things in place.“

Paul will headline the Pyramid Stage on Saturday night of next year’s Glastonbury Festival (June 27th)!

Glastonbury co-organiser Emily Eavis said: “Having Paul McCartney coming back to headline the Pyramid for the second time next year is an absolute dream come true. There really was no one that we wanted more for the 50th anniversary.“

Paul previously headlined the Festival in 2004.

Paul said: “Hey Glasto – excited to be part of your Anniversary celebrations. See ya next summer!“

[McCartney] will turn 78 the week before his performance, making him the oldest Pyramid stage headliner ever – beating Charlie Watts of the Rolling Stones, who was 73 when the band played in 2013. Other Pyramid performers further down the bill have been older, though, like 85-year-old BB King in 2011, and Burt Bacharach, who was 87 when he played in 2015. […]