“The Lyrics: 1956 to the Present” is Waterstones Book Of The Year 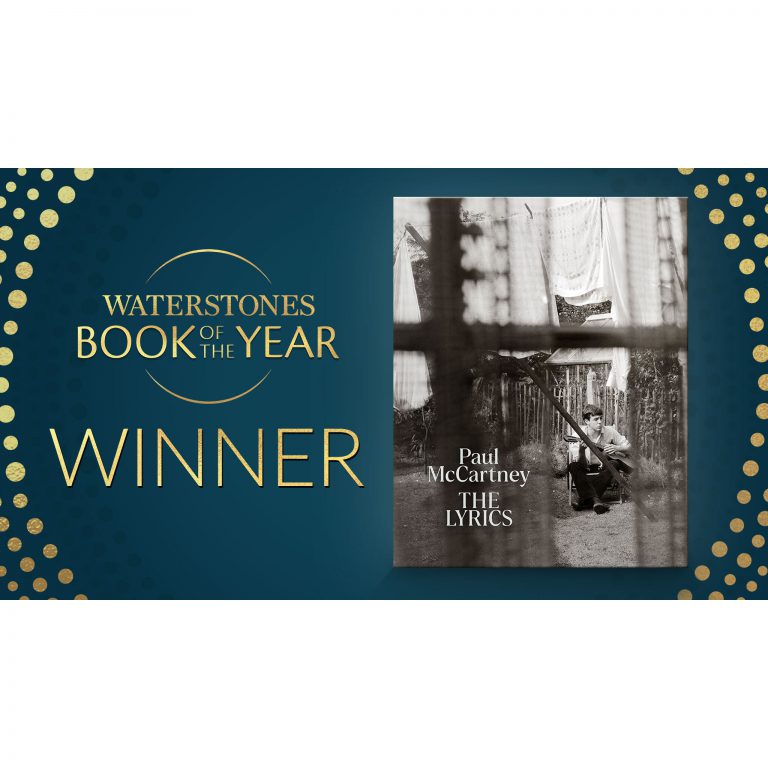 Paul McCartney talks to Paul Muldoon and prepares “The Lyrics: 1956 to the Present”

On this day, bookseller Waterstones announced that Paul McCartney’s book “The Lyrics: 1956 to the Present” was “Waterstones Book Of The Year”. From Twitter:

We’re thrilled to announce The Lyrics by @PaulMcCartney as Waterstones #BookOfTheYear. This intensely personal collection of memories, lyrics & photos is both cultural touchstone and masterpiece of book design, a gift to all book lovers.

What an amazing honour! Thanks Waterstones for this prestigious accolade. I’m really happy at the reaction to The Lyrics and to be chosen by the bookselling experts themselves for this is truly overwhelming. All those involved in putting the book together worked really hard and this is a great way for us all to celebrate. Bookshops rule! Cheers Waterstones!

There were a lot of negative reactions to this decision because Paul McCartney doesn’t really need this recognition and “The Lyrics: 1956 to the Present” is a pretty expensive book. Rob Power is a Beatles fan and works in the book industry; he shared the following analysis/opinion on Twitter about Waterstones’ decision:

I’ve been thinking about the Paul McCartney/Waterstones book of the year conversation that kicked off today. In a rare turn of events, I have some actual professional insight into it, so I thought I’d share I get the outcry.

The shortlist was incredible. There are TONS of talented authors that could use the sales and profile boost that comes with Book of the Year. Does one of the most famous people on the planet, another old, straight white man, need those things? He does not. This is also Christmas celebrity publishing. Everybody does it because it works, but do we really need to give what is ostensibly a celeb memoir one of the few awards that genuinely drive sales and awareness? Here’ are a few reasons I think Waterstones made this call.

First, the book represents a rare and, frankly, colossal commercial opportunity, in the wake of a disastrous couple of years. From a business point of view, you’d be stupid not to maximise it. Waterstones is not stupid. The Beatles are an industry in and of themselves. It’s rare that publishing gets a chance to grab a sizeable slice of this very lucrative pie. Macca’s book is a golden ticket. Take the price point. It’s eye-wateringly expensive. What does that mean for Waterstones? It means a significantly bigger margin than they’d make on even a pricey ‘normal’ hardback. Most authors could never get away with charging this for what is ostensibly a mass market product. But most authors haven’t got a huge, cross generational audience that’s been conditioned to spend £75-£100+ on media featuring their favourite band. The Beatles do. Compared with super deluxe box sets the Macca book – even at full RRP – is a bargain.

Then consider the wider context. The Beatles haven’t had a cultural moment like Get Back since the Anthology in the mid 90s. They are once again the biggest band in the world. And who is getting a critical and artistic reappraisal? Whose songwriting process has been foregrounded in the documentary? Who do you fall in love with all over again during the course the film? That’s right: Macca. The timing of the book isn’t an accident. This is a precision engineered commercial enterprise designed to create compelling art and shift units. And it will. This book will be on the top of so many Christmas lists it’s unreal. It’s top of mine. How often does a publishing project come along that can move something at this price point at serious volume? This isn’t any old Christmas book. This is a chance to capitalise on Beatlemania, 2021 style. It’s a perfect storm that sells shitloads of very expensive books.

And Macca knows what he’s doing. He is in the midst of a critical and commercial renaissance. McCartney III triggered it, brought new fans in, grew his socials. It was a brilliant campaign. Even the kids know who he is. He’s on TikTok. He’s trending right now. It’s astonishing. That’s another reason this is a safe bet. Macca will get out and sell this book. Genuinely, any author or book marketer could learn a thing or two from this campaign. Cross platform, impeccable socials, innovative events, and an author who pull every lever he can to sell books.

And a word on the book: it’s not a throwaway cash grab. It’s five years of work, the only long-form insight into arguably the greatest songwriter that’s ever lived, and a very pretty thing. Paul McCartney does not do things by halves. This is a legitimate project. Does any of this make up for what many see as a tone-deaf decision? Well, no. It hurts marginalised voices, indie publishers, champions of all those brilliant books that were written this year. Waterstones are simply staking their claim in a Beatle frenzy. I’ve watched colleagues get angry about this today and I get it, I do. And clearly I am in no way objective about this. I love Macca. But as someone who spends his days trying to engage the public and get them buying books, in Waterstones’ shoes, I’d have done the same thing. Anyway. Here endeth the sermon. I’ll shut up now. This was quite long wasn’t it. Sorry about that.