The Decca Tapes - The Definitive Edition

On 1 January 1962, before they reached international stardom, the Beatles auditioned for Decca Records at their Decca Studios in West Hampstead, north London. In what is considered one of the biggest mistakes in music history, Decca decided to reject the band, selecting instead Brian Poole and the Tremeloes.

Manager Brian Epstein made numerous trips to London to visit record companies with the hope of securing a record contract but was rejected by many, including Columbia, Pye, Philips, and Oriole. Neil Aspinall drove the Beatles down to London on New Year’s Eve, in 1961, for a Decca audition but lost his way, and the trip took ten hours. They arrived at 10 o’clock at night, and John Lennon said they arrived “just in time to see the drunks jumping in the Trafalgar Square fountain“.

On 1 January 1962, Paul McCartney, John Lennon, George Harrison and Pete Best were auditioned by Decca staff and performed a total of fifteen songs in just under one hour. Epstein and the Beatles decided on a selection of covers the Beatles had performed in various clubs over the years, along with three Lennon–McCartney originals.

The songs played at the audition were recorded. The Beatles subsequently came to believe that Epstein had paid Decca to tape the audition. Although it has sometimes been asserted, most notably by John Lennon, that Decca producer Tony Meehan (ex-drummer of The Shadows) produced the Decca audition session, current scholarship considers this unlikely. […]

Mike Smith agreed to let them record, telling them he could not see any problems and he would let the group know of his decisions in a few weeks.

Eventually, Decca Records rejected the Beatles, saying “guitar groups are on the way out” and “The Beatles have no future in show business,” although it has since been suggested that their work that day did not yet reflect their true potential, and the “guitar” comment may have been intended as a polite let down. Decca instead chose Brian Poole and the Tremeloes, who auditioned the same day as the Beatles, as they were local and would require lower travel expenses.

While Epstein was negotiating with Decca, he also approached EMI marketing executive Ron White. White (who was not himself a record producer) in turn contacted EMI producers Norrie Paramor, Walter Ridley, and Norman Newell, all of whom declined to record the Beatles. Months later, the Beatles went on to sign with EMI subsidiary Parlophone, after their “comedy album” producer George Martin heard the Decca demos and decided to meet the band. […]

The original safety master tape the group recorded at Decca’s London studios was sold by auctioneers, The Fame Bureau, in December 2012 to a Japanese collector for £35,000. A spokesman for the auctioneers said at the time “The tape went to a Capitol Records executive after the Beatles signed with EMI. He sold it to the current owner who was one of the top buyers for Hard Rock Cafe but it was for his own personal collection.” The authenticity of the tape sold remains debatable among experts however, as the tape of the audition contains 15 songs. The tape auctioned has only the 10 songs, and is on Ampex tape not in use in 1962. The master tape is believed to be in possession of The Beatles Apple Corps Ltd.

You can’t claim that it sounds good, cos technology’s better, we can make better records now. But that early stuff is interesting. It’s like seeing some artist’s early sketches. It may not be as good as his later work, but you see the germs of it all.

Five songs taken from the 15 laid down by the Beatles – John Lennon, Paul McCartney, George Harrison and Pete Best – during their audition for Decca Records. The session took place on New Year’s Day 1962, at the company’s studio at 165 Broadhurst Gardens in the West Hampstead district of north London. Recorded live, directly on to mono tape, without the opportunity to overdub or remix, the session was overseen by Decca A&R [artistes & repertoire] assistant Mike Smith.

Obtaining for the Beatles a contract with a British recording company was the number one priority that Brian Epstein assigned himself in his role as the new manager of the group. Moreover, in an attempt to underline the Beatles’ musical versatility, he personally selected the 15 songs cut at the Decca audition, all of which, to a greater or lesser extent, could be heard if one followed the group’s frequent performances around the Merseyside dance halls and rock clubs. Searchin’ and Three Cool Cats were certainly major Beatles stage favourties at this time, and both were from the same matrix: comedy numbers written by Leiber-Stoller and first recovered by the American R&B outfit the Coasters, in 1957 and 1958 respectively. For Searchin’, Paul supplied the lead vocal, John and George the backing vocal; Three Cool Cats featured George.

The Sheik Of Araby was another big favourite, again with George Harrison delivering the lead vocal. The song was first performed in the stage musical Make It Snappy and the 1940 Hollywood movie Tin Pan Alley, but the Beatles were inspired by a cheeky, chirpy rock and roll version by Joe Brown, consequently their Decca performance had humour to the fore, right from the best-style Arabic mood-setting kick-off through to the humour John-Paul “not arf”s.

By the start of 1962, Lennon and McCartney had been composing music, together or alone, for some five years, often claiming in early interviews to have written “100 original songs” before being noticed. The Beatles recorded very few of these numbers once successful. Like Dreamers Do and Hello Little Girl, to name but two, are early Lennon-McCartney numbers which the Beatles never recorded once signed to EMI, although they were obviously considered strong enough to present to Decca in the New Year’s Day audition, not least to prove the boast, rare for the period, that the group could pen their own material. Hello Little Girl was actually the first song written by John Lennon, Like Dreamers Do showed Paul McCartney in hopeful mood, “waiting for the bliss”.

Both song did eventually see commercial release. The Fourmost, another Liverpool group managed by Brian Epstein, were given Hello Little Girl in 1963; Like Dreamers Do was recorded by Birmingham band the Applejacks in 1964.

The Sheik Of Araby

To Know Her Is to Love Her

Take Good Care Of My Baby

Sure to Fall (In Love with You)

Love Of The Loved

September In The Rain 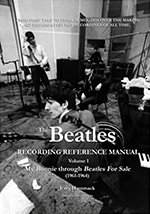 According to Tune In, Lewisohn's definitive history, George Martin didn't hear the Decca tapes and arrange a session. He had already rejected the band after meeting Brian. Brian actually got EMI's publishing arm to buy the publishing to 4 Lennon/McCartney songs, therefore Ardmore and Beechwood need one of EMI's labels to record demoes that could be pitched to other singers. Parlophone got the gig and George Martin just happened to be the producer on duty. He remembered Brian and got along famously with the boys as people, but didn't think much of their songs. With this second bite of the cherry, he thought Love Me Do was the best of the 4 and decided to release it as a single. The rest is....

Thanks @michael ! Indeed we can trust Lewisohn to have the records right ! Thanks !