The drummer on the first few dates of that was a substitute, Jimmy Nicol, drafted in the eleventh hour after Ringo had been taken ill the morning of 3 June. The EMI recording session booked for the remainder for the day was thrown into disarray by Ringo’s indisposition; instead of taping the fourteenth and final song for the album A Hard Day’s Night, John, Paul and George spent an hour listening to playbacks and running Nicol through some of the songs in their stage repertoire. Then, after the drummer had gone home to pack his suitcase, they remained at Abbey Road and, during a four-hour evening session in Studio Two, loosely recorded three songs, two of which are presented here. The tape of the session was misfiled and rediscovered in 1993.

Incorporating vocal, guitar, bass and tambourine tracks, this is believed to be the only existing recording of George Harrison’s second song composition You Know What To Do. (The first was Don’t Bother Me, issued on With The Beatles in 1963.) George did not contribute any songs to the albums A Hard Day’s Night and Beatles For Sale and then added two to the next, Help!, but You Know What To Do never resurfaced and has remained unissued until now.

With greater application extended during a session on 30 September 1964, John Lennon’s No Reply was issued, on the album Beatles For Sale, but this 3 June demo recording of the song certainly has not been heard before. It was announced at the time that John was giving No Reply to Tommy Quickly, another of Brian Epstein’s artists, and – as John sings it in a staccato, jaunty style more typical of Quickly’s than his own – it’s feasible that this demo was recorded with that donation in mind. (All the same, if he recorded it all, quickly never issued his version.) Intriguingly, a drummer is evident, even though no recognised player – neither Ringo nor Jimmy Nicol – was present.

#OTD 3JUN1964 George’s second composition “You Know What To Do” was recorded as a demo Abbey Road Studios but was never attempted by The Beatles as a group.. It was unreleased until The Beatles ‘Anthology 1.’

The Beatles had planned to record a 14th and final song for A Hard Day’s Night that afternoon but their plans changed after Ringo was taken ill with tonsillitis and pharyngitis. Replacement drummer Jimmy Nichol was swiftly brought in for a rehearsal from 3-4pm, ahead of the group’s imminent world tour, and afterwards the group recorded three demos.

At the beginning of a 5.30-9pm session they taped “You Know What To Do,” followed by two further demos: “It’s For You,” a McCartney composition written for Cilla Black; and “No Reply,” which would appear on the Beatles For Sale album.

For the demo of “You Know What To Do” George sang and played guitar, with Paul on bass and John on tambourine.

“You Know What To Do” remained unissued until 1995, when it was released on Anthology 1. Its existence was unknown until 1991, when evidence of the session came to light, and the misfiled tape was rediscovered in 1993.

You Know What To Do 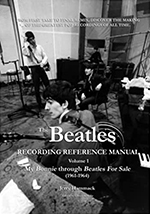