Album This song officially appears on the Can't Buy Me Love / You Can't Do That 7" Single.

Can You Take Me Back

Can't Get Through To You

“Can’t Buy Me Love” is a song composed by Paul McCartney (credited to Lennon–McCartney) and released by the Beatles on the A-side of their sixth British single, “Can’t Buy Me Love“/”You Can’t Do That“.

When pressed by American journalists in 1966 to reveal the song’s “true” meaning, McCartney stated that “I think you can put any interpretation you want on anything, but when someone suggests that ‘Can’t Buy Me Love’ is about a prostitute, I draw the line.” He went on to say: “The idea behind it was that all these material possessions are all very well, but they won’t buy me what I really want.” However, he was to comment later: “It should have been ‘Can Buy Me Love’ ” when reflecting on the perks that money and fame had brought him.

While in Paris, the Beatles stayed at the five star George V hotel and had an upright piano moved into one of their suites so that song writing could continue. It was here that McCartney wrote “Can’t Buy Me Love.” The song was written under the pressure of the success achieved by “I Want to Hold Your Hand” which had just reached number one in America. When producer George Martin first heard “Can’t Buy Me Love” he felt the song needed changing: “I thought that we really needed a tag for the song’s ending, and a tag for the beginning; a kind of intro. So I took the first two lines of the chorus and changed the ending, and said ‘Let’s just have these lines, and by altering the second phrase we can get back into the verse pretty quickly.’” And they said, “That’s not a bad idea, we’ll do it that way“.

The song’s verse is a twelve bar blues in structure, a formula that the Beatles seldom applied to their own material.

“Can’t Buy Me Love” was recorded on 29 January 1964 at EMI’s Pathe Marconi Studios in Paris, France, where the Beatles were performing 18 days of concerts at the Olympia Theatre. At this time, EMI’s West Germany branch, Odeon, insisted that the Beatles would not sell records in any significant numbers in Germany unless they were actually sung in the German language and the Beatles reluctantly agreed to re-record the vocals to “She Loves You” and “I Want to Hold Your Hand” prior to them being released in Germany. George Martin travelled to Paris with a newly mastered rhythm track for what was to be “Komm, Gib Mir Deine Hand” (“Come, Give Me your Hand“/”I Want to Hold your Hand“). “Sie Liebt Dich” (“She Loves You“) required the Beatles to record a new rhythm track as the original two-track recording had been scrapped. EMI sent a translator to be present for this recording session which had been hurriedly arranged to tie in with the Beatles’ Paris commitments. This was accomplished well within the allotted studio time allowing the Beatles an opportunity to record the backing track, with a guide vocal, to the recently composed “Can’t Buy Me Love“. At this stage the song included background vocal harmonies. But after listening to the first take, the band concluded that the song did not need them. Therefore, “Can’t Buy Me Love” became the first single the Beatles released without their characteristic background harmonies. McCartney’s final vocal was overdubbed at EMI Studios, Abbey Road, London, on 25 February. Also re-recorded on this day at EMI Studios was George Harrison’s modified guitar solo, although his original solo can still just be heard in the background. Harrison said: “What happened was, we recorded first in Paris and re-recorded in England. Obviously they’d tried to overdub it, but in those days they only had two tracks, so you can hear the version we put on in London, and in the background you can hear a quieter one.” Helen Shapiro, a friend of the Beatles and present at this overdub session, says that Ringo Starr also added extra cymbals “over the top” and that “apparently this was something he did quite often on their records” (Geoff Emerick, tape operator and later the Beatles’ recording engineer, credits Norman Smith, the Beatles’ then-current engineer, with this overdub). “Can’t Buy Me Love” is also the only English-language Beatles track that the Beatles themselves recorded in a studio outside the UK, although the instrumental portion of the Beatles’ B-side “The Inner Light” was recorded in India by Indian session musicians.

The Beatles established four records on the Billboard Hot 100 with “Can’t Buy Me Love” at number one:

The song was the third of seven songs by the Beatles to hit #1 in a one-year period; an all-time record. In order, these were “I Want to Hold Your Hand“, “She Loves You“, “Can’t Buy Me Love“, “Love Me Do“, “A Hard Day’s Night“, “I Feel Fine“, and “Eight Days a Week“. It was also the third of seven songs written by Lennon-McCartney to hit #1 in 1964; that’s an all-time record for writing the most songs to hit #1 in the same calendar year.

Rolling Stone ranked “Can’t Buy Me Love” at No. 289 on their list of the 500 Greatest Songs of All Time. The song spent five consecutive weeks at No. 1. The only Beatles songs to exceed that mark were “I Want To Hold Your Hand” at seven weeks and “Hey Jude” at nine weeks.

Can’t Buy Me Love became the Beatles’ fourth UK number-one single and their third single to sell over a million copies in the UK. It has sold 1.53 million copies as of November 2012.

The song was also released in the following albums: A Hard Day’s Night (both the American United Artists and British Parlophone versions); Big Hits From England and the USA, a various artists compilation album from Capitol issued in 1964; the British-only LP release A Collection of Beatles Oldies; the 1970 compilation Hey Jude (also known as The Beatles Again); the 1973 double disc collection 1962–1966 (the Red Album); the 1982 release Reel Music, which features songs from Beatles films; the 1982 compilation 20 Greatest Hits (both in England and America); and 1, released in November 2000.

The mono mix [a] has the rhythm track mixed more upfront, and sounds more powerful, but at the same time the guitar is less audible.

In both stereo mixes [b] [c], some of the drum sound appears in the center, fading up in between vocal lines and then back down, giving the impression it sounds this way on the multi-track. However, the outtake from the same day (see above) does not have this, so maybe it happened during the work in February rather than during recording. It may make for a better compressed sound in mono but sounds bad in stereo.

The stereo version that appeared the German LP The Beatles Beat, when it was issued in stereo in late 1965 or 1966, seems to have the lead guitar mixed a little softer. I think this is a mastering difference– several songs on the LP have less harsh treble– but this one is still open. It might be the stereo mix done March 10 and believed to be unused.

The processing by United Artists for [a1] “stereo” is curious: the song is entirely mono, except that it bounces toward right and then left channels at the vocal lines “[bounce] much for money [bounce] cause money can’t buy me love”.

The mono mix used in the movie (based on the American Film Institute restored version of 1996) has the guitar mixed louder. The source of this mix is unknown, and it does not appear on disk.

In earlier versions of this Variations guide, the mono mix is said to have additional drumming. It now appears to me that the same drumming is just mixed louder. Anyone care to listen?

Can't Buy Me Love / You Can't Do That 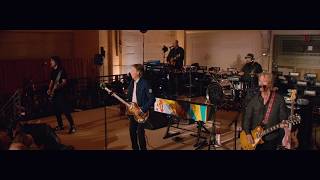 “Can't Buy Me Love” has been played in 543 concerts and 3 soundchecks.

Latest concerts where Can't Buy Me Love has been played

See all concerts where “Can't Buy Me Love” has been played