Timeline This song has been officially released in 1979

That was all based round some rhythm. I do like dance records: when you listen to records, you’re often down a club and want to dance with someone – I like dancin’, actually!

“Goodnight Tonight” is a single by the band Wings notable for its disco-inflected sound and spirited flamenco guitar break. It peaked at number five in both the United Kingdom and United States during 1979.

“Goodnight Tonight” began as an instrumental backing track McCartney had recorded in 1978. Needing a single for Wings to accompany the Back to the Egg album, McCartney took out the track and brought it into the studio, where the full Wings line-up completed it. Laine and Juber added electric guitars, mirroring Paul’s parts and Holley added percussion, while the whole band sang in the chorus. Since the track was over seven minutes long, an edited version was used as the single, with the full version available as a 12-inch single. A music video was made for the song, showing Wings performing in 1930s costumes; stills from the video were used on the single’s sleeve. In the US, the single was the first released under McCartney’s new deal with Columbia Records.

The track did not appear on Wings’ then-current album Back to the Egg (from which sessions this song was recorded), as McCartney felt it did not fit the theme of the LP; it was later included on the McCartney compilations All the Best! (1987), Wingspan: Hits and History (2001) and Pure McCartney (2016). The 7″ version was released as a bonus track on the 1993 remastered CD of McCartney II, as part of The Paul McCartney Collection. The B-side of this single was “Daytime Nighttime Suffering”. An extended version of the song appears on a digital iTunes re-issue of Back to the Egg.

“Goodnight Tonight” was an international hit, reaching number five on both the Billboard Hot 100 and the UK Singles Chart. John Lennon, McCartney’s former songwriting partner, later commented that he did not care for the song, but enjoyed McCartney’s bass guitar on the single. The single was certified Gold by the Recording Industry Association of America for sales of over one million copies.

The song was featured in the 2010 film Grown Ups. 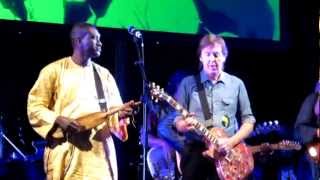 “Goodnight Tonight” has been played in 20 concerts.

Latest concerts where Goodnight Tonight has been played

See all concerts where “Goodnight Tonight” has been played