Album This song officially appears on the Beatles For Sale (Mono) LP.

Other songs from the 1960 Braun Tape

“I’ll Follow the Sun” is a song by the Beatles. It is a melancholy ballad written primarily and sung by Paul McCartney and credited to Lennon–McCartney. It was released in 1964 on the Beatles for Sale album in the United Kingdom and on Beatles ’65 in the United States, but was written long before that year: a version recorded in 1960 can be found on the bootleg record You Might As Well Call Us the Quarrymen. The song is somewhat of a cult favourite; it was released as a mono extended play 45 in 1964 on Parlophone/EMI (and in 1995 as a B-side to Baby It’s You).

The song’s lyrics center around a man who feels he is unappreciated by a woman. The song is believed to be him giving her an ultimatum, and that, as the lyrics state, “One day, you’ll look to see I’ve gone.” There is an unwillingness on the part of the song’s narrator that adds a tenderness and tragedy to his leaving: “And now the time has come, and so, my love, I must go. And though I lose a friend, in the end you will know“…, as well as a reluctance on the man’s ability to finalize the breakup, by the repeated phrase……”but tomorrow may rain, so I’ll follow the sun.”

One reason they didn’t use the song on their previous albums was because it wasn’t tough enough for their leather-jacketed early image. By the time they did record it for their fourth LP, the rhythm had changed from a rockabilly shuffle to a gentle cha-cha. Ringo Starr kept the beat by smacking his palms on his knees.

McCartney said of the song, “The next [single] had to always be different. We didn’t want to fall into the Supremes trap where they all sounded similar, so we were always keen on having varied instrumentation. Ringo couldn’t keep changing his drum kit, but he could change his snare, tap a cardboard box or slap his knees.“

I wrote that in my front parlour in Forthlin Road. I was about 16. I’ll Follow The Sun was one of those very early ones. I seem to remember writing it just after I’d had the flu and I had that cigarette – I smoked when I was 16 – the cigarette that’s the ‘cotton wool’ one. You don’t smoke while you’re ill but after you get better you have a cigarette and it’s terrible, it tastes like cotton wool, horrible. I remember standing in the parlour, with my guitar, looking out through the lace curtains of the window, and writing that one. […] It wouldn’t have been considered good enough [to be performed by the group]. I wouldn’t have put it up. As I said before, we had this R&B image in Liverpool, a rock ‘n’ roll, R&B, hardish image with the leather. So I think that songs like I’ll Follow The Sun, ballads like that, got pushed back to later.

The stereo mix [b] has more reverb than the mono.

McCartney performed the song live during The ‘US’ Tour; likewise at the Paris Olympia in 2007, in Kyev for the Independence Concert in 2008, in Quebec City at the free outdoor concert in 2008 (for the city’s 400th anniversary celebration), at Tel Aviv, Israel, in 2008, and during the Robin Hood Benefit concert in 2015.

Yet tomorrow may rain
So I'll follow the sun 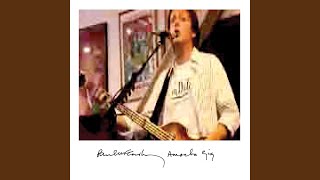 “I'll Follow The Sun” has been played in 55 concerts and 29 soundchecks.

Latest concerts where I'll Follow The Sun has been played

See all concerts where “I'll Follow The Sun” has been played