Jesus Be My Friend

“Jet” is a song by Paul McCartney and Wings from their album Band on the Run. Supposedly written about a jet black Labrador that McCartney owned, the song was the first British and American single to be released from the album. The song peaked at number 7 in both the British and American charts on 30 March 1974, also charting in multiple countries in Europe. It has been released on numerous compilation albums, and has since become one of the band’s most well-known tracks.

Along with “Helen Wheels” and “Junior’s Farm“, “Jet” is another McCartney song where his primary inspiration for composing the song arose in daily life.

Reviewers have reported that the subject of the song is McCartney’s Labrador Retriever dog named “Jet“. McCartney has also substantiated this claim.

However, in a 2010 interview on the UK television channel ITV1 for the program Wings: Band on the Run (to promote the November 2010 CD/DVD re-release of the album) McCartney explained that Jet was the name of a pony he had owned, although many of the lyrics bore little relation to the subject; indeed, the true meaning of the lyrics has defied all attempts at decryption.

The song’s use of the word “suffragette” was described by McCartney as “crazy” and “silly“, not having any deep inspiration.

Whereas most of the Band on the Run album was recorded in Lagos, Nigeria, “Jet” was recorded entirely at EMI Studios in London after the group’s return (according to engineer Geoff Emerick in his book Here, There and Everywhere). Instrumentation used in the song includes electric guitars, bass, Moog, drums, piano, horns and strings. A closer listening reveals the Moog is used for the bass line during the verse and is simply Linda holding the root note.

“Jet” was released as the debut single from Band on the Run in January 1974 (although in some countries, the Non-UK/US single “Mrs. Vandebilt” was released first). The single was a Top 10 hit for Paul McCartney and Wings, peaking at number 7 in both America and Britain. The single was backed with “Let Me Roll It” in Britain. When first released, in America the single’s B-side was “Mamunia“, another track from Band on the Run, but it was soon replaced with the British B-side.

“Jet” has been released on multiple compilation albums, including Wings Greatest (1978) and All the Best! (1987).

Prominent music critic Dave Marsh named the song number 793 in his list of the 1001 greatest singles ever made. He referred to it as a “grand pop confection” that represented the only time McCartney approached the “drive and density” of his tenure with the Beatles. Writer Graham Reid has described it as a power pop “gem“.

Paul McCartney has since said that the soft rock band The Carpenters were fans of “Jet“.

I remember Richard and Karen Carpenter ringing me up to tell me about ‘Jet’ – they were like the last people on Earth I thought who’d like ‘Jet’! But they were like, ‘Oh, great record, man!’ So, you know, it was actually resonating with people. — Paul McCartney, Clash

We’ve got a Labrador puppy who is a runt, the runt of a litter. We bought her along a roadside in a little pet shop, out in the country one day. She was a bit of a wild dog, a wild girl who wouldn’t stay in. We have a big wall around our house in London, and she wouldn’t stay in, she always used to jump the wall. She’d go out on the town for the evening, like Lady And The Tramp. She must have met up with some big black Labrador or something. She came back one day pregnant. She proceeded to walk into the garage and have this litter… Seven little black puppies, perfect little black Labradors, and she’s not black, she’s tan. So we worked out it must have been a black Labrador. What we do is if either of the dogs we have has a litter, we try to keep them for the puppy stage, so we get the best bit of them, and then when they get a bit unmanageable we ask people if they want to have a puppy. So Jet was one of the puppies. We give them all names. We’ve had some great names, there was one puppy called Golden Molasses. I rather like that. Then there was one called Brown Megs, named after a Capitol executive. They’ve all gone now. The people change the names if they don’t like them.

I was up in Scotland and it was a nice day, and I was on this little farm up there. So one day I just took my guitar out into the countryside and up this big mountain. And I find this beautiful little spot and I’m just making up a song. And what came to mind was we had a little pony for the kids, it was called Jet. A little black pony. So I thought, “OK, [sings] Jet!” and just shouted that and struck an A chord. “Jet!” So I got a little rhythm going.

Then I just started to think of this thing of when Linda and I had first got married, you know, I had her father to deal with. He was a great man, a lovely man, but he definitely was a father figure. He could be a little bit serious, a little bit restrictive, so this whole idea came into my mind, “Jet, your father was a Sergeant Major.” I started going off down that track of [sings] ‘Jet, I can almost remember the funny faces. That time you told him that you were going to be marrying soon.’ And I just made it up.

It’s largely fictional. Then it gets to the chorus, I go for some reason – and I really have no idea where this popped from –  I do this ‘Ah, mater.’ And ‘mater’ is Latin for ‘mother.’ I don’t know why I stuck that in. Maybe it’s just a word I liked. It just developed and by the time I came down off that mountain with my guitar I had the song finished.

So it’s this crazy little song. Really, if you break it down, it’s about a little black pony and some marital troubles and a Latin mother [laughs] jumbled all into one. Now there’s a case where people can make up their own mind as to what they think that means.

Jet, Jet,
Jet I can almost remember their funny faces
That time you told them that you were going to be marrying soon
And Jet I thought the only lonely place was on the moon
Jet Jet Jet

Jet / Let Me Roll It

Concert From the concert in London, United Kingdom on Jan 17, 1990 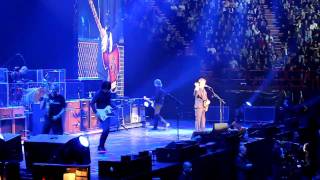 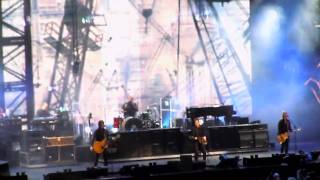 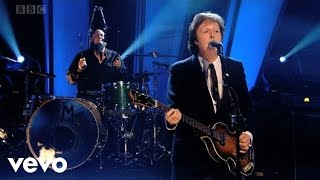 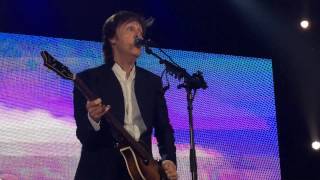 “Jet” has been played in 461 concerts and 26 soundchecks.

Latest concerts where Jet has been played

See all concerts where “Jet” has been played