Receptacle for the Respectable

Recording "Really Love You", "Looking For You", "Beautiful Night"

Other songs co-written with Ringo Starr

“Really Love You” is a song written by Paul McCartney and Ringo Starr — their first-ever shared credit — and originally released on McCartney’s 1997 album “Flaming Pie“. From Mark Lewisohn, in Club Sandwich n°82, Summer 1997:

The day after Ringo Starr had joined Paul to record ‘Beautiful Night’ the pair returned to the studio, where the instruments remained set up as before, and began a good old-fashioned jam session, Paul plucking his Hofner Violin bass, Ringo beating the drums and Jeff Lynne playing guitar. Three separate pieces evolved inside half an hour, one being ‘Looking For You‘ (issued on the B-side of first UK single ‘Young Boy’ and first US single ‘The World Tonight’), another ‘Really Love You’. This latter track best charted the desired R&B groove, with Paul adding a live vocal. Forced to invent the lyric on the spot, he duly grabbed the words out of “left-field”. “There’s one verse that doesn’t make any sense,” Paul admits, “which goes ‘I need your heart hopping on a plate’. I remember thinking, ‘ What did I just say?’ But I just had to keep going.” Credited to McCartney/Starkey – even after all this time this is still a first-ever credit for a released tune – the jam was completed by some guitar overdubs and mixed after Ringo had returned home. Played to him over the telephone by Paul, his response – “It’s relentless!” – remains the best description of the finished result.

Doing Beautiful Night with Ringo wasn’t enough. I wanted more fun. So we jammed. The actor’s worst dream is being on stage not knowing what plays he’s in – doing this vocal was like that, you can go anywhere. You’ve got to clear your mind – and play bass – let your head to and ad-lib it all.

Ringo was at my studio to record ‘Beautiful Night’ and we were getting a great sound from the instruments. The next session we did three jams in half an hour, including this one. I got on the Hofner bass, Ringo started drumming, Jeff Lynne was on guitar and the three of us got an R&B riff going. I had to fulfil the actor’s worst dream, of being on stage but not knowing what play he’s in – my version of this is that I have to sing words to a song that is being made up on the spot. This is why there’s one verse that doesn’t make any sense, which is well surreal, but that’s OK.

“Really Love You” started as a jam. He came over here and we had played around a couple of days. And then let’s have a jam, we’ve done the main track [Beautiful Night], let’s have a goof around and see if we come up with anything. So we just played for about half an hour, and Ringo just started off, and goes to the dum dum dum, that kind of tempo so I just sort of dum dum dum dum on the bass which I’ll show you next. And we made up this jam called “Really Love You”. The thing is, when you’re jamming like that, it’s like… If you talk to actors about the worst nightmare, I mean in the dream, they say “I go onstage and I suddenly realize I don’t know what play we’re in. Is it Hamlet of King Lear?”. You can really imagine the scariness… I have a similar dream but it’s the whole audience who is leaving in my dream. it’s always been like a big show, they are always leaving. So I always go to Yesterday, Yesterday, quick, quick. And we tried Yesterday but they are still leaving. Long Tall Sally, that would go. Because in the nightmare they all just leave until you wake up in a cold sweat.

When Ringo started I just did dum dum dum on the bass. Then I just think of something to say, you know, okay that’s this is fair enough now what’s the song, you know, what’s the song we do and it does look. “I LOVE YOU, Like a bear needs a break”. A bear needs a break? What are you talking about? Your mind is racing in a… “I want your heart, baby, hopping on a plate”.. Hopping on a plate ? Wait a minute… It’s all going all over pretty wrong but you’ve got to keep going because it’s a jam. So this track “Really love you” is based on that.

Paul McCartney, from Badman, Keith. The Beatles: Off The Record 2 – The Dream is Over

[Paul] invited me to play on ‘Beautiful Night’ and I said “Sure”. I think it’s a beautiful track, and while we did that we started jamming. He had a few ideas for a jam, playing his bass. I love to play drums when Paul’s playing bass – he’s such a fine player, still the most melodic. We were just jamming and he was shouting these words, and it turned into a song. Jeff Lynne was playing a little plunky guitar too – it was just the three of us and it turned out fine, just finding a pattern and playing it – it’s organic, it grows. It was a fun day and I like to hang out with Paul and Linda.

‘Really Love You’ is the first time you and Paul have been credited as writing together, just the two of you.

Well, I was surprised when I spoke to Paul, because we did just make it up as we went along. He called me and said I was sharing the credit and I said, “Thank you very much”. I wasn’t expecting anything. It’s like, “you play on my albums through the years, and I’ll play on yours”. I don’t get union rate! You know, we usually have dinner and send each other flowers and that’s it.

In 2005, a remixed version was released on the album Twin Freaks, and as a limited edition 12″ vinyl.

If you feel it in your heart
Then show it right now
You know I love you baby
I gotta get to you, get to you somehow

You know you do something
Special to me
And that's the way
I want it always to be, yeah

I need your love
Like a bear needs a break
I need your heart, baby
Hopping on a plate
I need the sunshine
Of your smile
Help me walk
Help me walk that extra mile 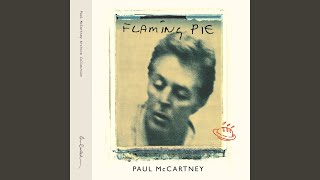