The Kiss Of Venus

The Light Comes from Within

‘The Kiss Of Venus’ was inspired by a book about the movements of the planets. The book discussed the ‘pentagram of Venus’ and used the poetic term the kiss of Venus. Along with Paul’s singing and guitar, the only other instrument to appear on the track is a harpsichord. Whilst often associated with Baroque music, Paul is a big fan of the harpsichord and has used it throughout his career, and on recent songs like ‘New’ and ‘Fuh You’. Paul also plays harpsichord on ‘Find My Way’ and ‘Pretty Boys’ on ‘McCartney III’.

On one of the songs off the new album, called ‘Kiss of Venus,’ I wrote it one summer’s day, and I got the beginning of it – The Kiss Of Venus, da, da, da, da – and I thought, ‘Oh, that’s OK, I’ll record it, I’ll finish it someday.’ But then I said to myself, ‘No, what have you got? You haven’t got anything on [right now]. Sit here and finish that bloody song!

I fight with myself sometimes. I did it recently. I had an afternoon, it was a lovely summer’s day last year, and the window was open and I was in the bedroom in London and I sat down and thought, ‘Oh yeah, I’ll have a noodle.’ So I was noodling on the guitar and I thought, ‘Oh, that’s quite good.’ And I thought, I’ll either just bang it down on my iPhone or I’ll finish it. And I wrestled with myself, and said, ‘Finish it – what else are you gonna do? stick it down then go and watch telly or something? Finish it. Take an hour or’. So I did and I was very proud of myself. I had a cool little book Jools Holland’s wife had given me, kind of an astrology book, all about the planets and the movements and the fantastic synchronicity of it all. A fascinating book, actually, when the planets go through all the little things, if you look at a graph, as it were, of them all, it like makes a lotus. It’s trippy. There was some great little phrases – “the kiss of Venus” was one of them. So I was loving that book and I was making up a song about that, but that was an instance of forcing myself to write. And I felt good after it. I thought, ‘Yeah that’s a pretty good little song.’ I haven’t had time to record it, but I will.

During his interview with the podcast Sodajerket in September 2018, Paul McCartney played a few seconds of “Kisses Of Venus” recorded on his phone.

A demo version of “The Kiss Of Venus” was released as a bonus track on some versions of “McCartney III“.

In 2021, for the “McCartney III Imagined” project, American singer Dominic Fike reimagined “The Kiss Of Venus” as “a retro-futuristic R&B tour de force“, according to the press release. The accompanying music video featured Paul McCartney at the very end of it.

when I started making this, the song wasn’t out yet and it was surreal to think that there was no youtube video to teach me how to play it. that I was the first person to get to figure it out. it started out as an exact cover but quickly morphed into this because there was no world where I was going to try and outdo the original so I made it my own. I still can’t believe this happened, thank you for being the ultimate source @paulmccartney

MIDDLE
Reflected mountains in a lake
Is this too much to take?
Asleep or wide awake?
And if the world begins to shake
Will something have to break?
We have to stay awake

The kiss of Venus
Has got me on the go

VERSE 1
Then I asked her, have you read the paper? (Okay)
People talking about which side they're taking
And if you know, then, baby, what's your take on it?
Does it make you wanna leave?
'Cause I could look the other way for you

BRIDGE
Reflected mountains in a lake
Is this too much to take?
Asleep or wide awake?
And if the world begins to shake
Will something have to break?
Or would we stay awake?

VERSE 2
Have you (Oh, I asked you) read the paper? (Oh, I asked you)
People talking without no education, yeah
Look, go to college (College), go find your major (Major)
Realize you're minor in the scheme of everything

See all official recordings containing “The Kiss Of Venus”

The Kiss of Venus (Lyric video)

The Kiss of Venus (by Dominic Fike)

The Kiss Of Venus (Visualizer) 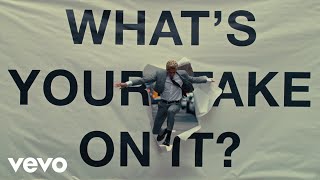 We Listened To Your New Album III And We Really Loved the Track “The Kiss of Venus” Because It Was So Heart Felt And True for the Times a Song That Touches the Soul Lifts It Up and Shine a Light of Truth Honesty And Hope When The World Is Caught In Such a Darkening Day . We Listened To It Again And Again And In The End We Really Felt a Whole Lot Better About The Day ! Through the Years Paul You Given the World Such Amazing Songs That Touch Our Hearts And Souls, That Shine a Light And Make Us Smile To Feel Inner Peace Joy And Happiness Deep Down Inside ! We Want to Thank You Paul for All the Decades You’ve Shared You Heart In Song With The World To Truely Make This World a Much Better Place One Listener At a Time . So In This Time When The World Seems So Sad , Afraid and Uncertain With All the Grief And Devastation Caused By The Global Pandemic Your Has Made Us Feel A-little Bit Better About The Day ! We Listened To Your New Album III And It Really Brightened Up Our Day ! Your Song “The Kiss of Venus” And an Earlier Recording of “I’m Taking You Home Tonight” Really Goes Back To Your Roots And Sounds That Were Produced During The Golden Age of The Beatles ! They are Really Wonderful Songs I Listened To Them Again And Again And It Got My Wife Smiling And Dancing Around In the Kitchen While She Was Cooking Lunch !

We Would Like To Wish Your a Merry Christmas and All the Best To You And Your Family In 2021 !

You Really Brightened Up Our Day !

We Also Had a Chance to Hear Ringo’s New Release of “Here’s To The Nights”
Which You Recorded Together !
Wonderful Song With Lyrics That Shine a Light So Bright On a Ever So Darkening World ! Perhaps Both of YoU Might Consider Getting Back In the Studio At Your Home In Scotland and Record a New Album Together That Full If So Much Love That It Will Shine a Blinding Light That Brightens Up The Day !

After All “All We Need Is Love”

Thank You So Much
You Brightened Up Our Day !