Album This song officially appears on the Please Please Me (Mono) LP.

Twice In A Lifetime

“Twist and Shout” is a 1961 song written by Phil Medley and Bert Berns (later credited as “Bert Russell”). The song was originally titled “Shake It Up, Baby” and recorded by the Top Notes. It first became a chart hit as a cover single by the Isley Brothers in 1962. The song has since been covered by several artists, including the Beatles on their first album Please Please Me (1963), as well as The Tremeloes in 1962 and The Who in 1970 and 1984. […]

Released on the Beatles’ first UK album, Please Please Me (1963), the recording of which on February 11, 1963 was their first album session and is notable for 11 songs recorded in a mere 10 hours. “Twist and Shout“, with John Lennon on lead vocals, was the last song recorded; producer George Martin knew Lennon’s voice would suffer from the performance, so he left it until last, with only 15 minutes of scheduled recording time remaining.

Lennon was suffering from a cold, and was drinking milk and sucking on cough drops to soothe his throat. His coughing is audible on the album, as is the cold’s effect on his voice. Even so, he produced a memorable vocal performance: a raucous, dynamic rocker. He later said his voice was not the same for a long time afterward, and that “every time [he] swallowed, it felt like sandpaper“.

A second take was attempted, but Lennon had nothing left and it was abandoned. George Martin said, “I did try a second take … but John’s voice had gone.“

Released as a single in the US on March 2, 1964, with “There’s a Place” as its B-side, by Chicago-based Vee-Jay Records on the Tollie label, it reached number 2 on April 4, 1964, during the week that the top five places on the chart were all Beatles singles. (In the Cashbox singles chart for the same week, “Twist and Shout” was No. 1.) In the United States, “Twist and Shout” was the only million-selling Beatles single that was a cover record, and the only Beatles cover single to reach the Top 10 on a national record chart. The song failed to hit #1 because the Beatles had another song occupying the top spot, “Can’t Buy Me Love“.

In the UK, “Twist and Shout” was released by Parlophone on an EP with three other tracks, “Do You Want to Know a Secret“, “A Taste of Honey”, and “There’s a Place“, from the Please Please Me (1963) album. Both the EP and album reached No. 1 (see Twist and Shout (EP)). In Canada, it became the title track to the second album of Beatles material to be issued by Capitol Records of Canada, on February 3, 1964.

It is regarded as one of the finest examples of British rock and roll for its vocal performance. The song was used as a rousing closing number on Sunday Night at the London Palladium in October 1963 and at The Royal Variety Show in November 1963, the former signalling the start of “Beatlemania“; the latter was included on the Anthology 1 compilation album in 1995. In addition, the group performed it on one of their Ed Sullivan Show appearances in February 1964.

The Beatles continued to play the song live until the end of their August 1965 tour of North America. Additionally, they recorded “Twist and Shout” on nine occasions for BBC television and radio broadcasts, the earliest of which was for the Talent Spot radio show on November 27, 1962. The intro sounds very similar to “La Bamba” by Ritchie Valens, and the famous vocal buildup resembles that in “Do You Love Me” by The Contours. […]

The remix [b3] has the two tracks moved slightly to center. A second remix [b4], probably made for the film Ferris Bueller’s Day Off, or at least for the promotion of the single related to it, has the left instrumental track relatively louder.

The Beatles At The Beeb - Volume 1

Concert From "The Beat Show" in Manchester, United Kingdom on Jul 04, 1963 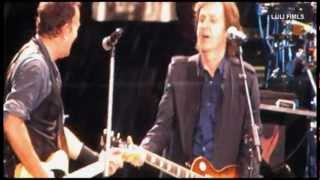 “Twist and Shout” has been played in 269 concerts.

Latest concerts where Twist and Shout has been played

See all concerts where “Twist and Shout” has been played