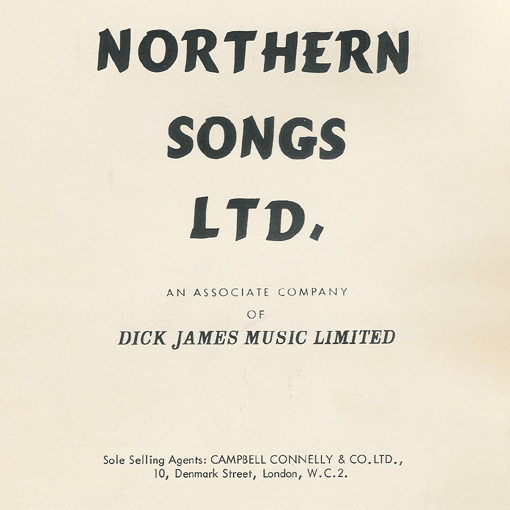 On this day, the music publishing company Northern Songs was incorporated. It was founded by music publisher Dick James, The Beatles’ manager Brian Epstein, John Lennon, and Paul McCartney, to publish songs written by Lennon and McCartney. The deal was signed in Brian Epstein’s Liverpool home.

Brian Epstein and Dick James were named as directors of the company (John Lennon and Paul McCartney, surprisingly, were not).

As George Martin felt EMI’s Ardmore & Beechwood publishing company had done almost nothing to promote “Love Me Do“, Martin advised Epstein to find a good publisher, telling him about three publishers who, in Martin’s opinion, would be fair and honest, which led Epstein to James. Epstein turned up at James’ office with an acetate of “Please Please Me“, but was reluctant to let James publish it without any proof of his publishing power. James immediately picked up the phone and called Philip Jones, the producer of the prestigious TV show, Thank Your Lucky Stars, playing him the acetate over the phone, and saying the song was “a guaranteed future hit”. Jones agreed, and promised a spot on the show. Epstein, suitably amazed at the speed of the booking, decided that James was a man he could trust.

On 22 February 1963, James suggested to Epstein that forming a company with Lennon, McCartney and Epstein would earn more money in the long run. Lennon and McCartney thought they would own the whole company, but were given a 20 per cent share each, Epstein 10 per cent, and James and his partner, Charles Silver, 50 per cent. Another company, Maclen Music—which published Lennon and McCartney’s music in the US—was also controlled by Northern Songs. Both Northern Songs and Maclen Music were administered by Dick James Music. Northern Songs also published Harrison’s early compositions, as well as Starr’s.

McCartney later explained that they signed all the contracts Epstein presented to them without reading them first, with Lennon adding, “We had complete faith in him [Epstein] when he was running us. To us, he was the expert”. James offered producer Martin shares as well, but he turned them down, saying it might well be unethical as he worked for EMI. The monies gathered by Northern Songs were channelled into a second company, Lenmac Enterprises; owned by Lennon and McCartney (40% each) and NEMS (North End Music Stores) 20%. The company would collect profits from the UK only. […]

Brian was at the house with a lawyer-type guy, but nobody said to us, ‘This is your lawyer and he’s representing your interests in this thing.’ We just showed up, got out the car, went into this dark little house, and we just signed this thing, not really knowing what it was at all about, that we were signing our rights away for our songs. And that became the deal and that is virtually the contract I’m still under. It’s draconian!

John and I didn’t know you could own songs. We thought they just existed in the air. We could not see how it was possible to own them. We could see owning a house, a guitar or a car, they were physical objects. But a song, not being a physical object, we couldn’t see how it was possible to have a copyright in it. And therefore, with great glee, publishers saw us coming.

We said to them, ‘Can we have our own company?’ They said, ‘Yeah.’ We said, ‘Our own?’ They said, ‘Yeah, you can. You’re great. This is what we’re going to do now.’ So we really thought that meant 100 per cent owned. But of course, it turned out to be 49 per cent to me and John and Brian, and 51 per cent to Dick James and Charles Silver.

John and I were taken for a ride. No doubt about it. We were in a little mews in Liverpool one morning and there was this lawyer, who we later found out was sort of ours. He didn’t look like ours and he certainly didn’t do a deal like he was ours.

We’d signed the whole thing away one morning before getting on a train and we didn’t understand what it was. Later, when we tried to readjust it, the publisher (Dick James) said ‘I can’t’. I know now through having a publishing company that you can, at any point. So in other words, yeah we were signed to a slave contract.

There was always this voting share that could beat us. We could only muster 49; they could muster 51. They could always beat us. John and I were highly surprised to find that even though we’d been promised our own company, it actually was a company within Dick James’s company that was to be our own company. And we thought that’s not fair at all, but this was just the way they pulled the wool over our eyes. And we were on such a roll creatively, you couldn’t just take a year off and sort out the business affairs. We had no time. We never met this Charles Silver guy; a character who was always in the background. Jim Isherwood clued us in a little bit as to who he was. He was the Money, that was basically who he was, like the producer on a film. He and Dick James went in together, so Silver always got what was really our share! There were the two of them taking the lion’s share, but it was a little while before we found out.