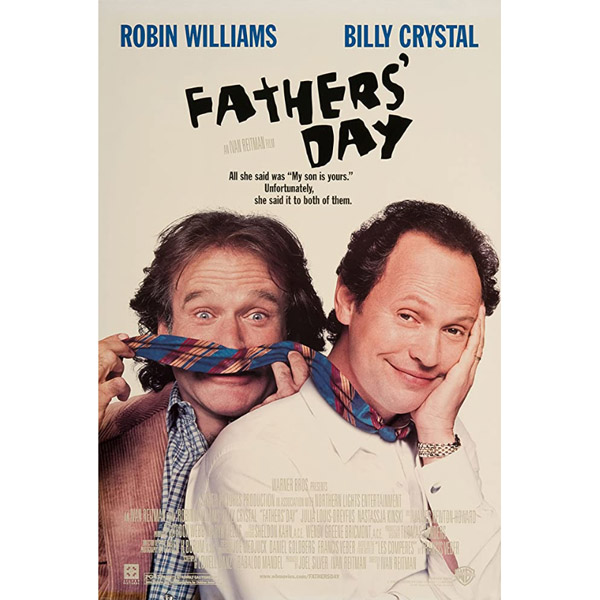 “Fathers’ Day” is a comedy film directed by Ivan Reitman and starring Robin Williams, Billy Crystal, Julia Louis-Dreyfus, and Nastassja Kinski. Two tracks of the “Flaming Pie” album were included in the soundtrack. As the movie was released in theatres in the US on May 9, 1997, the US public discovered those tracks – “Young Boy” and “The World Tonight” – ahead of the official release of the album (“Flaming Pie” was released on May 5 in the UK, and May 20 in the US). Specific 5.1 mixes of the songs were built for the movie.

Paul McCartney is teaming up with Robin Williams and Billy Crystal for the new comedy movie Father’s Day Williams and Crystal provide the laughs in Warner Bros, summer release and Macca provides the music.

Father’s Day – in which Williams and Crystal are caught in the chase for a runaway boy in order to discover which of them is his father – will feature two of Paul’s songs from Flaming Pie – ‘Young Boy’ and ‘The World Tonight’.

Father’s Day will go on screens from May 9th, coinciding with the worldwide release of Flaming Pie.

A promotional video for “The World Tonight” has been made. From PAUL MCCARTNEY –MUSIC VIDEO COLLECTION 1970-2020 PART 1, by Mike Carrera:

This official video was made to promote the movie ‘Father’s Day’ starring Robin Williams and Billy Crystal, which included two new songs by McCartney. It is a combination of the versions filmed by the two directors: Geoff Wonfor – using EDIT B of Version 1 with the digital shooting star – and Alistair Donald including also exclusive scenes that did not appear in their previous videos (Young Boy V2 and The World Tonight V2). It was broadcast several times on video channels and interspersed scenes from the film. It is still not available in any official release but it is available on Bootleg DVD.