The McCartney Week on VH1 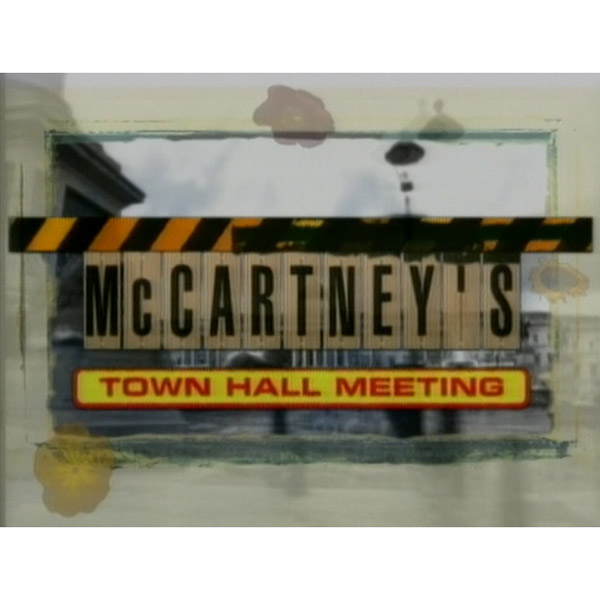 On this day, the television network VH1 started “The McCartney Week“, a week of special McCartney programming. This included:

VH1 to “Fly Fans on the Run” sweepstates winners to London for the event New York, NY, April 15, 1997 — VH1 announced today an exclusive one-hour special, Paul McCartney’s Town Hall Meeting. The broadcast, which will air live on VH1 in the U.S., UK and Germany, will be accompanied by a simultaneous live webcast on Saturday, May 17 at 1 p.m. ET/10a.m. PT and 6 p.m. (GMT). This will be the only U.S. event on behalf of the release of his upcoming album, “Flaming Pie,” in which McCartney will participate. Paul McCartney will be answering questions from the audience and questions previously submitted by Internet users. The event will be followed by a one-hour, worldwide online chat, in the same question and answer format as the televised special, with the artist answering questions right off the Internet. VH1 Online (at https://www.vh1.com) is the exclusive source for the chat. The front end to the event will be provided by the VH1 Online and Capitol Records sites.

VH1 will support the live special with McCartney Week on the network May 12-17. Features programming includes the U.S. premiere of a new one-hour documentary on Paul McCartney, directed by Grammy Award winning Beatles Anthology filmmaker Geoff Wonfor. Wonfor will also be directing the VH1 special. The documentary chronicles the past two years of McCartney’s life, the making of the new record, “Flaming Pie,” and his recent knighthood. In addition, VH1 will air the concert films “Paul Is Live”, “Wings Across the World” and additional acquisitions to be announced shortly.

VH1 Online will be supporting Paul McCartney’s Town Hall Meeting with a series of promotions and exclusive events. In addition to providing information on the television and Internet specials, VH1 Online will premiere the first video/single, cybercast video clips and sneak previews of the new documentary. Through VH1’s partnership with the online retailer Music Boulevard, website visitors will be able to purchase “Flaming Pie” before its release date. The Town Hall Meeting will be extensively promoted on the World Wide Web, America Online, and in cross-links with Capitol Records, McCartney’s label.

VH1 has created a national and local sweepstakes called “Fans on the Run,” which will run from April 21 to May 3. Contestants may enter by mail, phone or via VH1 Online. One national Grand Prize winner will win a trip for two to London aboard VH1’s Magical Mystery Plane, spending money, a limo tour of “McCartney’s London,” front row seats to the Town Hall Meeting, McCartney memorabilia and a complete McCartney/Beatles multi-media library. One thousand First Prize winners will win “Flaming Pie” CDs. In addition, twenty local radio winners will win trips to London for the event and additional prizes including VH1 premiums and CDs.

New York, NY, May 9, 1997 VH1 rolls out a week of special programming leading up to the LIVE broadcast of “”McCartney’s Town Hall Meeting” on Sat., May 17 at 1PM (ET), 10AM (PT) and 6PM (GMT). Each night beginning at 9PM (ET/PT), Mon., May 12 through Fri., May 16, VH1 brims with premieres, documentaries and concerts featuring Paul McCartney and The Beatles. Programming highlights are as follows:

“The Beatles: The First U.S. Visit” kicks off VH1’s “McCartney Week” on Mon., May 12, airing from 9-10:30PM and repeating from 12-1:30AM. A documentary of The Beatles’ arrival on U.S. shores on February 7, 1964, “The Beatles: The First U.S. Visit” features the Fab Four performing hits such as “I Wanna Hold Your Hand,” “Love Me Do” and “Twist & Shout” on “The Ed Sullivan Show.” Also featured is behind-the-scenes footage of the group in their limos, hotel rooms and on their way from New York to Washington D.C. to Miami. Immediately following the premiere of the documentary are two half-hour editions of “Beatles Video Collection,” airing from 10:30-11:30PM. Videos featured include “Can’t Buy Me Love,” “Hey Jude,” “Let It Be” and “Free As a Bird.”

“I Wanna Hold Your Hand” is VH1’s “Rock ‘n’ Roll Picture Show” airing on Tues., May 13 from 10:30PM-12:30AM. Directed by Robert Zemeckis, the 1978 film follows a carload of New Jersey teenagers determined to get tickets for The Beatles’ appearance on “The Ed Sullivan Show.”

“Paul Is Live,” featuring Paul McCartney in concert on the 1993 New World Tour, premieres Wed., May 14 from 9-11PM and repeats from 12-2AM. A compilation of McCartney’s performances in cities such as New York, Atlanta and Sydney, Australia, “Paul Is Live” includes songs such as “All My Loving,” “We Can Work It Out,” “Hey Jude” and “Let It Be.” Immediately following from 11PM-12AM is “Paul McCartney Video Collection,” featuring “Silly Love Songs,” “Coming Up” and “No More Lonely Nights.”

“Rockshow” kicks off the evening on Thurs., May 15, airing from 9-11:30PM and repeating from 12-2:30AM. Featuring Paul McCartney in concert during his 1976 World Tour, “Rockshow” premiered for the first time on U.S. television in March of 1979. Songs featured include “Let Me Roll Into You,” “I’ve Just Seen a Face,” “Go Now” and “Listen What the Man Said.”

“Paul McCartney & The World Tonight” makes its world television premiere on VH1, airing on Fri., May 16 from 9-10:30PM and repeating from 12-1:30AM. A 1997 documentary directed by Geoff Wonfor, the Grammy Award winning Beatles Anthology film maker, “Paul McCartney & The World Tonight” chronicles the past two years of McCartney’s life. The making of McCartney’s new album, Flaming Pie, and his recent knighthood are both featured. Immediately following the documentary is “Wings Over the World,” airing from 10:30PM-12AM. The Wings concert tour movie from which “Rockshow” was created, “Wings Over the World” has never before been seen on TV in its full glory. Featured in the movie are McCartney, wife Linda and the band talking to the press, rehearsing and recording as well as footage of McCartney family moments. The best performances from the 1976 tour are also featured, including the songs “Jet,” “Maybe I’m Amazed” and “Live and Let Die.”

“McCartney’s Town Hall Meeting” marks the final premiere in VH1’s “McCartney Week,” airing LIVE in the U.S., UK and Germany on Sat., May 17 from 1-2PM (ET), 10-11AM (PT) and 6-7PM (GMT). The premiere U.S. event in which McCartney will participate on behalf of the release of his upcoming album, “McCartney’s Town Hall Meeting” will feature McCartney at The Bishopsgate Memorial Hall in London answering questions submitted from the audience and also via internet, phone and mail. The event will be followed by a 30-minute, worldwide online webcast complete with video stream, in the same question and answer format as the televised special, with the artist answering questions right off the internet.

“McCartney’s Town Hall Meeting” will repeat on Sat., May 17 from 4-5PM and from 9-10PM. Also repeating on Sat., May 17 is “Paul McCartney & The World Tonight,” airing from 2-3:30PM and “The Beatles: The First U.S. Visit,” airing from 7-8:30PM and from 12-1:30AM.VH1 produces and programs a wide variety of music-based series, specials, live events and acquisition-based programming that keeps viewers in touch with the music they love. VH1 is a registered trademark of MTV Networks, a unit of Viacom, Inc. MTV Networks, a unit of Viacom Inc., owns and operates five cable television programming services MTV: Music Television, M2, VH1, Nickelodeon/Nick at Nite, and Nick at Nite’s TV Land all of which are trademarks of MTV Networks.