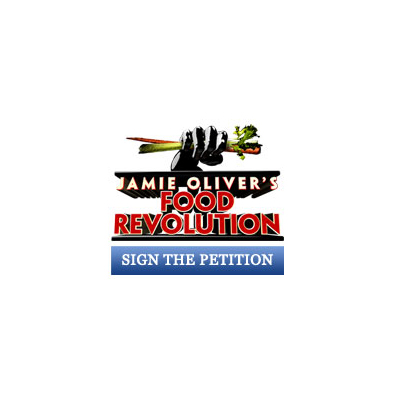 Paul has lent his name and signature to Jamie Oliver’s new campaign in America, which is helping people change the way they think about food. Jamie’s new US TV show,’Food Revolution’, is about improving Americans health by making simple dietary changes. It aims to educate people about food, cooking and the huge health benefits of switching from processed to fresh food. Jamie has started a petition to change the current laws on food in US schools. The petition needs enough signatures to make this happen. Paul was happy to sign up to such an important cause. He even added his own addendum to the petition which reads, ‘and a Meat Free Monday would be GREAT for all of us on the planet! (UN 2006)’. Fellow petition signee’s include Ricky Gervais, Jennifer Aniston, Ellen DeGeneres, Larry King and Gwyneth Paltrow. Jamie’s TV show is co produced with Ryan Seacrest and the pair recently appeared on Oprah to talk about the campaign and get her support.