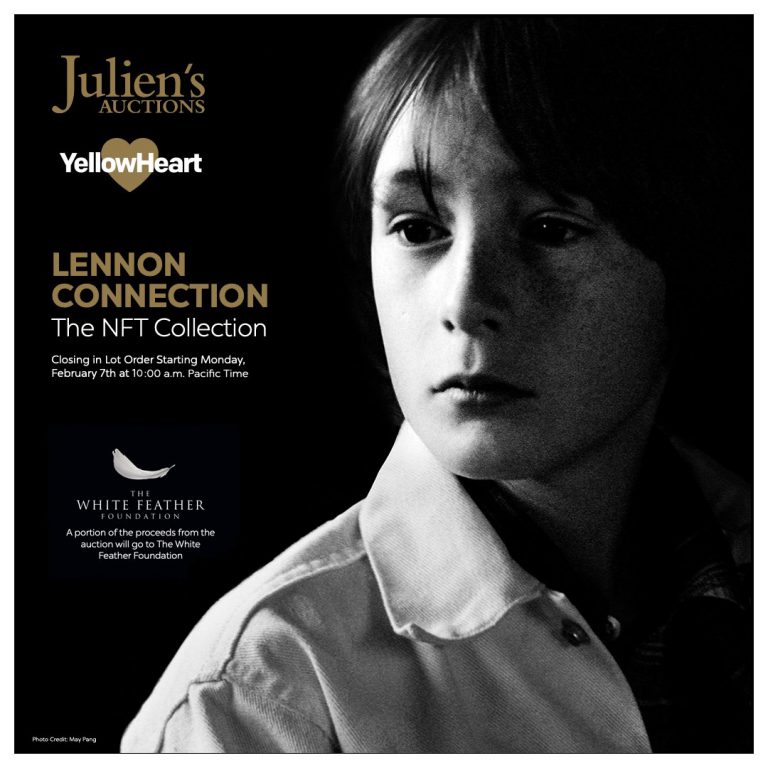 On February 7, 2022, a virtual version of Paul McCartney’s handwritten notes for the song “Hey Jude” was sold by Julian Lennon for $76,800. The NFT version of the notes was presented as an animation in which the words are progressively inscribed on the page and was accompanied by an audio commentary from Julian Lennon.

A non-fungible token (NFT) is a non-interchangeable unit of data stored on a blockchain, a form of digital ledger, that can be sold and traded.[1] Types of NFT data units may be associated with digital files such as photos, videos, and audio. Because each token is uniquely identifiable, NFTs differ from blockchain cryptocurrencies, such as Bitcoin.

Own a piece of music history as Julian Lennon unveils his inaugural digital exhibition, with his private collection of John Lennon and Beatles memorabilia, including Paul McCartney’s rare, handwritten notes from “Hey Jude.”

To comfort Julian following the divorce of his parents, Paul McCartney wrote the legendary Beatles song “Hey Jude.” Paul’s original notes are included in this debut drop, which also features the cape John Lennon wore in the Beatles film Help!; an afghan coat that John wore on the set of Magical Mystery Tour; and three of Julian’s guitars that were personal gifts from his father.

Julian Lennon’s sensitive and poetic vision of life courses through his acclaimed music, photography and writing. In music, Lennon’s melding of uplifting introspection and thoughtful social commentary with refined hooks has made for a compelling seven-album body of work. His debut, Valotte (Atlantic), yielded two top ten hits—the title track and “Too Late for Goodbyes”—and was nominated for a Grammy for “Best New Artist.” He went on to have #1 singles on the U.S. album rock charts. Internationally, one of his most popular songs, “Saltwater” charted successfully around the world, topping in Australia for four weeks and reaching #6 in the U.K. In 2022, Lennon returns with a new album (BMG), which contains a personal and powerful array of songs that reflect relatable, universal themes.

An acclaimed fine arts photographer, Lennon has exhibited in galleries worldwide since 2010. In 2021, he partnered with Portia de Rossi’s General Public and RH to present a special collection, which is available now.

As the Founder of The White Feather Foundation, Lennon has received numerous humanitarian awards, most recently the 2021 World Literacy Award for his significant contribution to literacy. He is also a New York Times bestselling author, with four children’s books, all with environmental themes, in his current repertoire.

The White Feather Foundation (TWFF), established by Julian Lennon in 2007, supports environmental and humanitarian projects that help advance the mission to Conserve Life. A portion of the sale proceeds from this NFT collection will benefit The White Feather Foundation (TWFF), which will use the funds to purchase carbon removal from Nori in the form of Nori Carbon Removal Tonnes (NRTs). Each NRT represents one tonne of CO2-equivalent heat-trapping gas that has been removed from our atmosphere and stored in a terrestrial, subsurface, industrial or aquatic reservoir. Nori currently achieves this by working with farmers across the United States to adapt regenerative practices that increase carbon removal and sequestration. Once the carbon removal purchases have been made, TWFF will make public the Nori certificate of carbon removal which provides all information regarding the carbon removal transaction.

The 1968 Beatles’ masterpiece is frequently included on music lists of the greatest songs of all time. The first song released on the Beatles? own Apple Records label, “Hey Jude,” originally titled “Hey Jules,” was written for Julian Lennon by Paul McCartney to comfort him during the time of his parents John and Cynthia Lennon’s divorce. The classic was the Beatles’ biggest-selling single in the U.S., having sold five million copies in the first six months of its release and became the number one song in 12 countries. Paul separated how he thought the song should be structured into four sections, with voices and instruments. These are his original notes, which include his personal doodles and drawings. An image of the notes, this NFT is a 1 of 1 Edition of the physical item and does not include the physical item. The item is brought to life in an even more personal way through Julian Lennon’s exclusive audio narration, which is minted as part of this NFT. A NFT is a unique and non-interchangeable unit of data stored on the blockchain. Julian Lennon is the sole owner of the physical item. The winner of this item will share in that exclusivity of Lennon history as the sole owner of the NFT. Starting at $30,000