Other songs named after a bird

Officially appears on Chaos and Creation in the Backyard

“Bluebird” is a song written by Paul and Linda McCartney and originally performed by the British rock band Wings, released on their 1973 album Band on the Run. According to author John Blaney, it was written during a vacation in Jamaica. However, author Vincent Benitez claims the song was written as early as 1970 or 1971, noting that Paul and Linda sang the song during a live interview in New York City in 1971. In Continental Europe it was also released as the B-side of the “Mrs. Vandebilt” single.

“Bluebird” was reportedly composed by McCartney in 1971, during his holiday in Jamaica. Although much of the Band on the Run album was recorded in Lagos, Nigeria in August and September 1973, “Bluebird” was completed later in 1973 at AIR Studios in London. The percussionist on the song, Remi Kabaka, was from Lagos but happened to be in London when the song was being recorded. One highlight of the song is a saxophone solo played by session musician Howie Casey. Casey repeated his solo during the Wings Over the World tour in 1975 and 1976. Other musical elements of the song include acoustic guitars and calypso-like percussion.

In the lyrics, Paul McCartney compares himself in love to a bluebird. The opening lyrics are:

Blaney interprets the bluebird as “a metaphor for the transcendent power of love and the liberation of the human spirit from mental and physical bondage”. Benitez regards the bluebird as a metaphor for love itself – love that is the only source of transcendent freedom. The song describes the singer’s revitalization after having been upset at the beginning of the song. Jon Landau describes the song as “a simple love song” but sees in its “flying” motif a continuation of the theme of escape that runs throughout the Band on the Run album. The singer tells his lover that when he, as a bluebird, kisses her she can also become a bluebird, at which point they become absolutely free.

The song is in the key of F major although it sounds like it is in E-flat major due to the way the guitars are tuned. The refrain is simply a rhythmic chart based on the phrase “I’m a Bluebird” sung by McCartney with Linda and Denny Laine providing harmony. Benitez states about the music that “the harmonic schemes of verse and chorus strongly suggest that the text of each verse raises a question, only to be answered by each chorus through its exclamations of being a bluebird.”

Donald Guarisco of AllMusic describes “Bluebird” as “a simple bit of acoustic pop that overflows with hooks thanks to a slick arrangement” and “a delightful, breezy pop tune”. NME critics Roy Carr and Tony Tyler commented that McCartney’s “lightweight touch … works superbly on ‘Bluebird'” and likened it to “Blackbird” from the Beatles’ self-titled double album (also known as the “White Album”).

Paul McCartney & Wings (with Joe English and Jimmy McCulloch) recorded “Bluebird” along with an apology to Japanese fans for their being unable to tour in Japan after he was denied entry into the country. An incomplete version of the video was included with the 25th Anniversary Edition of Band on the Run, and a longer version (including the apology) was included on the 2001 documentary Wingspan – An Intimate Portrait.

In 2017 Rolling Stone magazine ranked “Bluebird” as McCartney’s 14th greatest post-Beatles song, stating that it “features a bittersweet melody only McCartney could have written, carried along by guitar that lilts like Brazilian bossa nova and soft-touch percussion from Nigerian instrumentalist Remi Kabaka”. […]

From Paul McCartney In His Own Words, Paul Gambaccini:

The only other musician on the album, other than the orchestra, is, funnily enough, African! We were gonna use African musicians, but when we were told we were about to pinch the music we thought ‘Well, up you, we’ll do it ourselves then, so there’s no question about it.’ Then we were back in London working at AIR Studios and this old friend from the past named Remi Kabaka turns up. And he’s from Lagos! He played on one of the tracks, he plays a bit of percussion on Bluebird, so he’s the only one who ended up doing anything on the album.

Paul McCartney in His Own Words

We wrote it in Jamaica when we were on holiday. In the recording, we used a bloke called Harry Casey who we’ve never used before. I know him from way back, when we were in Hamburg. Then he used to be in a group called Derry and the Seniors – at that time he looked about 40, with his pork-pie hat and long drape jacket. Now he looks about 25 and is your groovy session player! He played a blinder of a sax solo.

Helping us on percussion is a guy called Lenny Kabaka – the only African we used. When we were back in London he just turned up at the studio, and we found out he was from Lagos! 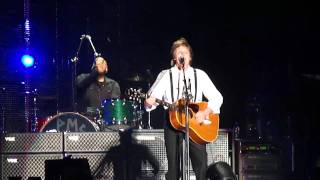 “Bluebird” has been played in 62 concerts and 96 soundchecks.

Latest concerts where Bluebird has been played

See all concerts where “Bluebird” has been played