Album This song officially appears on the Mull Of Kintyre 7" Single.

Overdubs for "Mull Of Kintyre"

“Mull of Kintyre” is a song by the British-American rock band Wings written by Paul McCartney and Denny Laine. The song was written in tribute to the picturesque Kintyre peninsula in Scotland and its headland, the Mull of Kintyre, where McCartney has owned High Park Farm since 1966. The song was Wings’ biggest hit in Britain where it became the 1977 Christmas number one, and was the first single to sell over two million copies nationwide.

The lyrics of the first verse, also used as the repeating chorus, are an ode to the area’s natural beauty and sense of home:

McCartney explained how the song came into being:

I certainly loved Scotland enough, so I came up with a song about where we were living: an area called Mull of Kintyre. It was a love song really, about how I enjoyed being there and imagining I was travelling away and wanting to get back there.

“Mull of Kintyre” was recorded on 9 August 1977 at Spirit of Ranachan Studio at High Park Farm in Scotland, during a break in recording the London Town album caused by Linda McCartney’s advanced pregnancy. The song featured bagpipes played by the Campbeltown Pipe Band from nearby Campbeltown. Paul’s vocals and acoustic guitar were recorded outdoors. “Mull of Kintyre” and “Girls’ School” (a rocker that had been previously recorded for London Town) were released as a double A-sided single on 11 November 1977, independently of the album. It was included on the Wings compilation Wings Greatest in 1978, the UK/Canada version of McCartney’s 1987 compilation album All the Best!, the 2001 compilation Wingspan: Hits and History and the 2016 compilation Pure McCartney.

The song’s broad appeal was maximised by its pre-Christmas release and it became a Christmas number one single in the UK, spending nine weeks at the top of the charts. It also became an international hit, charting high in Australia and many other countries over the holiday period. It went on to become the first single to sell over two million copies in the UK and became the UK’s best-selling single of all-time (eclipsing The Beatles’ own “She Loves You“) until overtaken by Band Aid’s “Do They Know It’s Christmas?” in 1984 (which also featured McCartney on the B-side). The song remains the UK’s best-selling completely non-charity single, having sold 2.08 million copies. (Queen’s “Bohemian Rhapsody” has sold more in its two releases, but the profits of the 1991 release went to charity.)

The millionth copy of the disc sold in the UK included a special certificate. It was sold to David Ackroyd, who was presented with a gold disc of the single by Laine.

Despite its international appeal, the song was not a major hit in North America, where the flipside “Girls’ School” received more airplay and reached #33 on the Billboard Hot 100 and #34 on the Canadian RPM charts. “Mull of Kintyre” was not a pop hit at all in the US, but did manage to reach #45 on the Easy Listening chart.

He had an idea for a song. I went around to have breakfast with them up in Scotland. … I heard the chorus and I said that’s a potentially hit song. So the next day we went and finished it off. We sat down and wrote the lyrics and put it together. Then we brought in the Campbeltown Pipe Band and they were all excited. It was the first time they’d ever been in a studio and it was fun. We recorded the pipes and drums outside so we got the echoes off the mountains. It came out at Christmas and it was a big hit (in England). It was a B-side over here.

“Mull of Kintyre” came about [when] we were in Scotland. I went round to Paul’s one day and he had the chorus. That’s the song, I think. The chorus. We were inspired by Scotland, so I helped with the lyrics. The Campbeltown Pipe Band made it the song it is. Billy Connolly liked it, a nice endorsement, otherwise he would have slagged us off onstage. [Laughs] We would never have wanted a Scottish song that they didn’t like. And a lot of that is from the pipe band [which] transposed keys [and] added to the arrangement… The pipe band was recorded outdoors with the echo. Magical. Where we were, you could see where Scotland ends and Ireland begins.

Linda and I spent quite a bit of time [in Scotland] when the kids were young. The Beatles had just broken up, over business problems, and that had been pretty upsetting. I was at a bit of a loose end. We lived in a farmer’s croft on the Mull of Kintyre that I had bought before I met Linda, but it was quite run down and I had never visited it much. We were retreating from the world; it was really comforting to be there. We just headed north and escaped. It was glorious. In the evenings, you could walk outside and there would be this endless sky. In some ways, it was at the end of the world. It wasn’t that easy to get to us, which we liked, as we had been so accessible before that. I fell in love with Scotland again and wrote a song based on my love of the area, with the local pipe band. The song was so successful it got on some people’s nerves. But I loved it.

Paul McCartney, from a 2019 FT.com article

My love of Scotland, I got off John Lennon. John had relatives in Scotland and when he was a kid he’d gone to a croft. I’d never done the likes of this: the furthest we got was Butlin’s. So I’d heard him talk about it and got involved with the swirrl of the mist… I’d eventually got a farm up there, and being up there I’d heard some bagpipe music. I thought, the problem with this is it’s very nice, but it’s all old: there’s no music being written for bagpipe or Scottish singers. I couldn’t relate to it and I thought it’d be nice if there was a newer Scottish song.

So I thought, I’ll try and write one. I had to find out what key the bagpipes play in – got my guitar out and asked Tony Wilson, the leader of the Campbeltown Pipe Band at the time. So we went out into the garden and I said, ‘Basically you seem to be in A or D’, and I found out what notes he could do and set about writing it. The funny thing is, the two modern Scottish hits – ‘Amazing Grace’ by the Royal Scots Dragoon Guards and ‘Mull Of Kintyre’ – were both written by Sassenachs.

It was great fun doing it. We converted this barn just for the night, with a mobile studio brought in – moved the barley out. So we had a couple of McEwans and off we went. It was great

Far have I travelled and much have I seen?
Dark distant mountains with valleys of green
Past painted deserts the sunset's on fire?
As he carries me home to the Mull of Kintyre

Sweep through the heather like deer in the glen?
Carry me back to the days I knew then
Nights when we sang like a heavenly choir?
Of the life and the times of the Mull of Kintyre??

Smiles in the sunshine?and tears in the rain?
Still take me back where my memories remain?
Flickering embers grow higher and higher?
As they carry me back to the Mull of Kintyre??

Concert From the concert in Glasgow, United Kingdom on Jun 23, 1990

1977 • For Wings • Directed by Michael Lindsay-Hogg 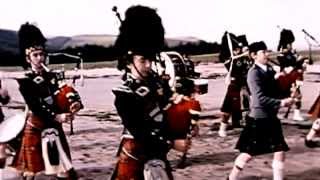 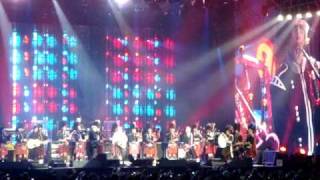 “Mull Of Kintyre” has been played in 48 concerts and 20 soundchecks.

Latest concerts where Mull Of Kintyre has been played

See all concerts where “Mull Of Kintyre” has been played

Thanks for the shoutout!