See all concerts in Australia on the map

SIR Paul McCartney was every bit the crowd pleaser, rolling out a hit-filled set list for a sold out crowd during the biggest show of his Australian tour at Suncorp Stadium last night.

The 40,000-strong audience roared with approval as the 75-year-old former Beatle opened with A Hard Day’s Night.

McCartney treated his adoring fans, who were earlier lashed by wind and rain as they poured into the stadium, to a string of hits including Can’t Buy Me Love, Jet and I’ve Got A Feeling.

“G’Day Brisbane – I am getting the feeling here we are going to have a bit of a party tonight,” he told the enthusiastic crowd as they danced.

[…] His first Brisbane show in more than four decades marked the largest crowd on a single night of the Australian leg of his One on One world tour.

“It’s really great to be back in Brisbane after a long time,” he said.

“It is so great here I am going to take a moment to myself here just to drink it all in okay.”

McCartney, who last toured Down Under in 1993, skipping the Sunshine State, has previously played four shows at Brisbane’s Festival Hall – two with The Beatles in 1964 and two with Wings in 1975 – but last night’s expected crowd was bigger than all four of those gigs combined.

Earlier, before the weather eased up, lightning lit up the skies and a warning to take shelter was played on screens throughout the stadium.

“Due to storm activity please leave the field and exposed areas immediately. Announcements will be made when you may return to your seats on the field,” the warning read.

McCartney had jetted into Brisbane on a private plane under the cover of darkness ahead of his show.

Mushroom Group chairman Michael Gudinski told The Sunday Mail the hit-filled tour had so far exceeded his expectations and said promoting it had been “a privilege”.

“Paul holds the audience in the palm of his hand from start to finish in his close to three-hour set,” Mr Gudinski said. […]

The Instagram account of Paul shared a picture of Paul with Ant & Dec taken in Brisbane. From Wikipedia:

This is the first time Paul has performed in Brisbane as a solo artist. And I’m going to hand you over to the review in the Gold Coast Daily Bulletin newspaper to explain what a momentous event this is. In a novel and eye-catching twist, it is written in the form of a letter to Paul:

“DEAREST Paul, Kind Sir Please accept our warmest and most sincere thanks for the generous invitation to join you in Brisbane on Saturday for what was surely one of the most pleasing evenings we’ve had the honour of attending in, well, decades.

We must confess, we weren’t feeling very Christmas-y at all until your performance swept us up in its loving embrace and reminded us how fortunate we are to be able to look forward to spending the festive season in the bosom of our nearest and dearest.

We can never overstate what a treasured friend you have been to so many of us for so long.

You have always been, and thankfully remain, a charismatic melange of quintessential English gentleman and contemporary rock hero.

It had been way too long since your last visit, so we couldn’t let you leave town without making sure you realise how delighted we were to see you in such fine form and thank you for your masterful long live show and generous inclusion of so many Beatles and Wings favourites.

Age hasn’t wearied you or your cherubic good looks (sadly, it appears some of the 40,000 fans at Saturday’s show haven’t fared as well). Could the infectious, eternal optimism and sunny disposition you have so masterfully infused even your most melancholy songs with (‘Let It Be’, ‘Hey Jude’) be the secret to your enduring vim and vigour?

As your marvellous musical group hug/singalong demonstrated (‘Yesterday’, ‘Ob-La-Di’, ‘Ob-La-Da’, ‘Mull of Kintyre’), the witty, wise and wonderful words you’ve gifted us in so many beautiful songs have proven a great source of comfort and courage to so many of us during some of the darkest and most challenging times of our lives (‘Maybe I’m Amazed’).

We were moved to see so many people wiping tears from their eyes at various moments throughout your performance. Your music’s ability to simultaneously touch so many people in such personally unique and meaningful ways remains one of contemporary art’s most perfect mysteries. Genius.

Lyrics, riffs and melodies aside, we had almost forgotten what a great storyteller you are. We enjoyed hearing the tales behind some of our favourite songs, particularly the one about Jimi Hendrix trying to get Eric Clapton to tune his guitar. Hadn’t heard that one before.

Of course, trips down memory lane are always fascinating when the ‘old mates’ you generously gave a hit song to (‘I Wanna Be Your Man’) were the Mick Jagger and Keith Richards kind.

We weren’t as close to George (we didn’t realise he was a card-carrying, uke-playing member of the George Formby fan club) and John (you are so right — we replayed ‘Love Me Do’ and can hear your nerves) as you and Ringo were, but we too miss them both dearly and were moved by your thoughtful tributes to them (‘Something’, ‘Here Today’).

While summer thunderstorms certainly made Saturday ‘A Hard Day’s Night’, we couldn’t help but wonder whether you, like us, felt Linda, George and John smiled over us and kept the rain at bay while you played.

As delicious as yours and guitarists Rusty Anderson and Brian Ray, drummer Abe Laboriel Jr and keyboard player “Wix” Wickens’ bandstand was, ‘Let Me Roll It’, ‘Blackbird’, ‘Nineteen Hundred and Eighty-Five’, ‘Back in the U.S.S.R.’ and ‘Carry That Weight’ were among our personal favourites.

Including The Beatles’ first (The Quarrymen’s ‘In Spite of All The Danger’) and last (‘The End’) songs in the set was also a lovely touch.

It’s hard to believe it’s been so long since our first dance (‘Love Me Do’). You truly have become one of what we like to call our “births, deaths and marriages” friends. The ones forever by our side, whatever life’s thick or thin.

Let’s face it, you really are the man who has had a hand in writing pretty much EVERYTHING!

It was wonderful to see so many people make so much effort with their costumes (‘Sgt. Pepper’s Lonely Hearts Club Band’), although we were worried the ‘Sgt. Pepper’s Sisters’ pink suits would melt to their skin when those thumping pyrotechnics raised the temperature (and heart rates) in the premium seats (‘Live and Let Die’).

While Mum and Dad, regrettably, were unable to join us on Saturday, please accept their apologies — they promise to make up for it next time you come over.

Please don’t leave it too long until we meet again dear friend (‘Get Back’). You never know what unexpected twists and turns life will reveal.

In the meantime, rest assured — your music will continue to hold our lives in the palm of its hands.

I’ve read hundreds of Paul’s reviews over the years and this was a really cool and refreshing way to approach it.

Attending the show in Brisbane are UK TV stars Ant & Dec who were filming their hugely popular I’m A Celebrity … Get Me Out Of Here! Show, just two hours out of Brisbane. The boys had only one night off during the entire series, but they used it wisely by heading down to catch the gig. Their regular routine meant they should be in bed at 6pm every night to be up for their 2am start, but they were determined to see Paul’s show, with or without the producers’ blessings! They even manage to say hi to Paul prior to the show, then tweeting their joy: “It is an honour, a privilege, not to mention a huge thrill to spend time in the presence of Paul McCartney. A lifelong hero of both of ours and a gentleman and still rocking!” 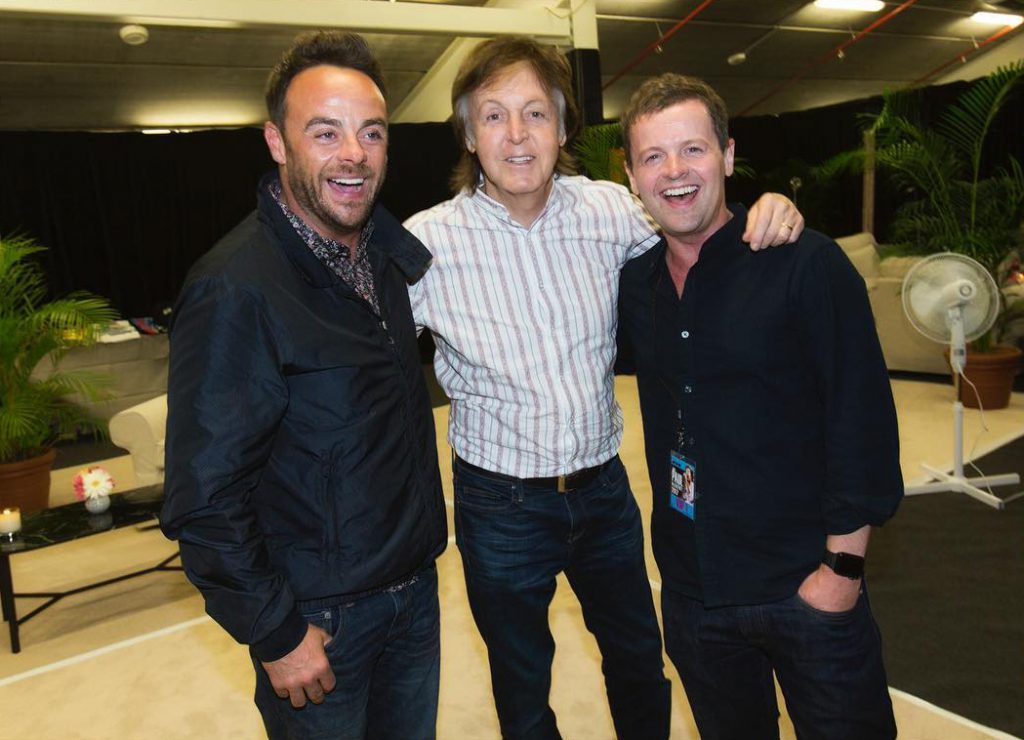 Imagine being asked to catch up with a friend and former work mate who just happens to be The Beatles’ Paul McCartney?

That is what just happened to northern NSW resident and former Londoner Joanne Petersen, then Joanne Newfield, who was the personal assistant for Beatles manager Brian Epstein in the 1960s.

Ms Petersen, who now lives in the small town of Bangalow, has been invited to catch up with Sir Paul in Brisbane in December during his Australian tour.

She says it has been nearly 40 years since she has seen him and there is a lot to catch up on.

“I would be typing in the office and Paul and John would be writing songs, scrawling down lyrics, and throwing the pieces of paper on the floor,” she said.

This was the 1st and only concert played at Suncorp Stadium.