Recording "You Never Give Me Your Money", "Golden Slumbers", "Carry That Weight"

Recording "Golden Slumbers", "Carry That Weight", "The End", "Something", "Here Comes The Sun"

Recording and mixing "Golden Slumbers", "Carry That Weight", "The End"

I was playing the piano in Liverpool in my dad’s house, and my stepsister Ruth’s piano book was up on the stand. I was flicking through it and I came to Golden Slumbers. I can’t read music and I couldn’t remember the old tune, so I just started playing my own tune to it. I liked the words so I kept them, and it fitted with another bit of song I had.

“Golden Slumbers” is a song by the English rock band the Beatles from their 1969 album Abbey Road. Written by Paul McCartney and credited to Lennon–McCartney, it is the sixth song of the album’s climactic B-side medley. The song is followed by “Carry That Weight” and begins the progression that leads to the end of the album. The two songs were recorded together as a single piece, and both contain strings and brass arranged and scored by producer George Martin.

“Golden Slumbers” is based on the poem “Cradle Song” from the play Patient Grissel, a lullaby by the dramatist Thomas Dekker. McCartney saw sheet music for “Cradle Song” at his father’s home in Liverpool, left on a piano by his stepsister Ruth. Unable to read music, he created his own music. McCartney uses the first stanza of the original poem, with minor word changes, adding to it a single lyric line repeated with minor variation. In the 1885 collection “St Nicholas Songs”, p. 177, is W J Henderson’s music set to the poem, titled “Golden Slumbers Kiss Your Eyes”. Abbey Road does not credit Dekker with the stanza or with the title. Thomas Dekker’s poem was set to music by W J Henderson in 1885, Peter Warlock in 1918, also by Charles Villiers Stanford and Alfredo Casella.

McCartney was the lead vocalist. He begins the song in a soft tone appropriate for a lullaby, with piano, bass guitar, and string section accompaniment. The drums come in on the line “Golden slumbers fill your eyes”, and McCartney switches to a stronger tone, both of which emphasise the switch to the refrain. McCartney said, “I remember trying to get a very strong vocal on it, because it was such a gentle theme, so I worked on the strength of the vocal on it, and ended up quite pleased with it.”

The main recording session for “Golden Slumbers”/”Carry That Weight” was on 2 July 1969. John Lennon was not present, as he had been injured in a motor vehicle accident in Scotland on 1 July, and was hospitalised there until 6 July.

Drums, timpani, and additional vocals were added in an overdub session on 31 July, the same day the first trial edit of the side two medley was created, with Lennon participating in the session. On 15 August, orchestral overdubs that marked 30 musicians altogether were added to “Golden Slumbers” and five other songs on Abbey Road. […]

Should be ready for a “Swing For Swinging Lovers” album. It’s an old English love song … It should really be in a fairy tale.

‘Golden Slumbers’, as comparatively few people know, is an old Victorian song based on a poem by the Elizabethan dramatist Thomas Dekker. I happened to find the words on a piece of piano sheet music when I was in Liverpool. My dad had married again, to a woman who had a daughter; and my stepsister Ruth, or maybe her mother, played a bit of piano. Even then, I always looked inside the piano seat because a lot of people have their sheet music in there. That’s where I first discovered ‘Golden Slumbers’.

I liked the words [Thomas Dekker’s lullaby “Golden Slumbers”] so much. I thought it was very restful, a very beautiful lullaby, but I couldn’t read the melody, not being able to read music. So I just took the words and wrote my own music. I didn’t know at the time it was four hundred years old.

I liked the ‘Golden Slumbers’ lyrics on that sheet music a lot, and I noodled around and came up with a tune for them. It’s what we might generously call sampling, or possibly stealing. But because I don’t read music, I didn’t know what the melody was, so I put my own to it. It’s very possible that I’d been feeling down in London. I was back in the solace of family and Liverpool, and what with the Beatles troubles down south, I was likely thinking, ‘Wouldn’t it be nice to get home and have that comfortable feeling again?’ So, there may have been some of that in the background. I wouldn’t rule it out.

Paul McCartney first brought “Golden Slumbers” in the recording studio on January 9, 1969. It can therefore be assumed the song was written between December 1968 and early January 1969.

I remember trying to get a very strong vocal on it, because it was such a gentle theme, so I worked on the strength of the vocal on it, and ended up quite pleased with it.”

That’s Paul’s, apparently from a poem that he found in a book, some eighteenth-century book where he just changed words here and there … He laid the strings on after we had finished most of the basic tracks. I personally can’t be bothered with strings and things. I like to do it with the group, or electronics, you know. I can’t be bothered with the hassles of the musicians and all that bit, you know. It’s such a drag trying to get them together, but Paul digs that. So, that’s his scene, and it was up to him where he went with the violins, really, and what he did with them. I think he just wanted a straight kind of backing, you know, nothing freaky … White Trash (the Apple recording group) has just done a cover of ‘Golden Slumbers’. They made quite a good version of that. It’s pretty similar to the track we did, except they’ve done some nice things with a big organ, a church organ playing a solo. They’ve done it quite gutsy.

The original poem by Thomas Dekker, a contemporary of William Shakespeare, was written in 1599 (and was therefore in the public domain in 1969). It first appeared in the play “The Pleasant Comedie Of Patient Grissil” written by Thomas Dekker, Henry Chettle, and William Haughton, first printed in 1603. The original form of the poem is a followed:

Golden slumbers kiss your eyes,
Smiles awake you when you rise.
Sleep, pretty wantons; do not cry,
And I will sing a lullaby:
Rock them, rock them, lullaby.

Care is heavy, therefore sleep you;
You are care, and care must keep you;
Sleep, pretty wantons; do not cry,
And I will sing a lullaby:
Rock them, rock them, lullaby

The poem was set to music under the title “Golden Slumbers Kiss Your Eyes” by W.J. Henderson in 1885.

The 2d generation was an edit of two takes.

The crossfade joins this to the following song, The End; the join is in the guitar work after the last “carry that weight a long time”.

"Golden Slumbers" is one of the 154 songs covered. 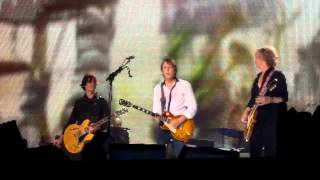 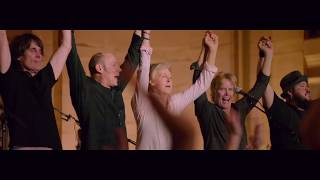 “Golden Slumbers” has been played in 374 concerts and 2 soundchecks.

Latest concerts where Golden Slumbers has been played

See all concerts where “Golden Slumbers” has been played