Album This song officially appears on the FourFiveSeconds Single.

“FourFiveSeconds” is a song recorded by Barbadian singer Rihanna, American rapper Kanye West, and English musician Paul McCartney for Rihanna’s upcoming eighth studio album. It was written by West, McCartney, Kirby Lauryen, Mike Dean, Ty Dolla Sign, Dave Longstreth, Dallas Austin, Elon Rutberg, and Noah Goldstein. Previewed by West at the iHeartMedia Music Summit on January 21, 2015, it was posted on Rihanna’s official website on January 24. The same day the song was released as the lead single from her upcoming album being made available for digital download via the iTunes Store. “FourFiveSeconds” is a pop song with country and folk music influences and an instrumentation consisting of an acoustic guitar, organ and cello. […]

“FourFiveSeconds” is a “country-tinged” acoustic and “stripped down” pop song with a folk feel and a length of three minutes and eight seconds. “FourFiveSeconds” features a simple instrumentation consisting of only an acoustic guitar and organ, while it’s also accompanied by a cello in the background. Instead of being rapped, West’s lines are sung, while McCartney only plays the instruments. Billboard’s Jocelyn Vena stated that the sound of the single represents a departure from the material present on Rihanna’s 2012 studio album, Unapologetic. Hugh Mclntyre of Forbes agreed with Vena who also stated that it “is a complete departure for both Rihanna and Kanye West, though it does fit McCartney’s style“. Lanre Bakare of The Guardian called the song an “acoustic ballad” and agreed that the song is a departure from Rihanna and West’s previous collaborations. Alex Frank of Vogue magazine described “FourFiveSeconds” as an unplugged version of Rihanna’s 2011 single “We Found Love“, without the dance beats, present on her previous singles.

Lyrically, it “express emotions ranging from the flip to the resigned“. Sharan Shetty of Slate stated that the song is about “heartbreak and redemption“, while a Yahoo! News reviewer noted that it is about “personal travails and confusion“. Nora Crotty of Elle magazine described the single as an “ode to repenting in the morning for the foolish mistakes you made the night before“. Billboard’s Vena stated that a plucky acoustic guitar accompanies Rihanna’s vocals while she sings the lines, “I think I’ve had enough/ Might get a little drunk/ I say what’s on my mind/ I might do a little time. Cause all of my kindness/ Is taken for weakness.” The lines are followed by West’s part with him singing, “Woke up an optimist/ Sun was shining, I’m positive/ Then I heard you was talking trash/ Hold me back/ I’m about to spazz.” On the later chorus Rihanna and West join vocals as they sing, “Now I’m four, five seconds from wildin’/ And we got three more days ’till Friday/ I’m just trying to make it back home by Monday morning.”

“FourFiveSeconds” received rave reviews from music critics. Peter Kandunias of Gigwise praised Rihanna’s and West’s vocals and also McCartney’s play of the instruments in the song. Mclntyre of Forbes specifically praised Rihanna’s vocals and wrote that the spotlight is on them and are highlighted in a way they can not be on her “club-ready, bombastic tunes“. Jim Farber of New York Daily News praised the collaboration and stated that it’s better than the previous West-McCartney collaboration. Additionally, he praised Rihanna’s vocals and stated that they are a lot better than West’s, “who could have used more auto-tune to firm his unsteady vocals” Farber further noted, “It’s refreshing to hear Rihanna sing with so little affect, in a setting that’s much less processed than most of her recordings“. Vox’s Kelsey McKinney noted that Rihanna’s voice presents growth in range and tone since her last album, and it’s more vulnerable than we’ve heard Rihanna since the 2013 single “Stay“. According to him, the song hints that her new album could have more confessional slow songs like “FourFiveSeconds“.

Spencer Kornhaber of The Atlantic also praised Rihanna’s vocals, writing, “Listen to the ragged squeak in her voice in the first verse, and how she maintains control as she alternates between contemplative trills and gospel shouts during the bridge“. According to him, the song showcases the distinctiveness of her timbre and phrasing is, something that wasn’t heard on her previous songs like the 2010 single “Only Girl (In the World)“. Travis Grier of Def Pen Radio thought that the song is a right choice for Rihanna to achieve legendary status, as, “she’s tackled pretty much every genre under the sun and ‘FourFiveSeconds’ just expands her versatility even more“. Crotty of Elle wrote that the song is “awesome” and “sweet“.

Now I'm FourFiveSeconds from wildin'
And we got three more days 'til Friday
I'm just tryna make it back home by Monday mornin'
I swear I wish somebody would tell me
Ooh, that's all I want

Woke up an optimist
Sun was shinin', I'm positive
Then I heard you was talkin' trash
Hold me back, I'm 'bout to spaz

Yeah, 'bout FourFiveSeconds from wildin'
And we got three more days ‘til Friday
I’m tryna make it back home by Monday mornin'
I swear I wish somebody would try me
Ooh, that’s all I want

Concert From the concert in Minneapolis, USA on May 04, 2016

Concert From the concert in Minneapolis, USA on May 05, 2016 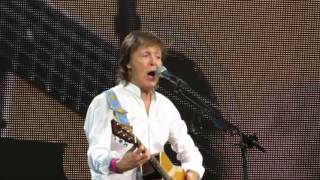 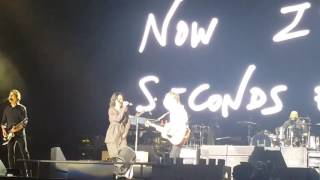 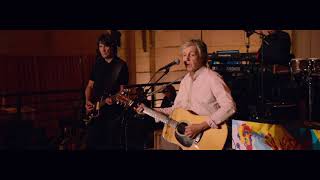 “FourFiveSeconds” has been played in 90 concerts and 1 soundchecks.

Latest concerts where FourFiveSeconds has been played

See all concerts where “FourFiveSeconds” has been played