“Sgt. Pepper’s Lonely Hearts Club Band” is a song written by Paul McCartney (credited to Lennon–McCartney), and first recorded and released in 1967, on the album of the same name by the Beatles. The song appears twice on the album: as the opening track (segueing into “With a Little Help from My Friends“), and as “Sgt. Pepper’s Lonely Hearts Club Band (Reprise)“, the penultimate track (segueing into “A Day in the Life“). As the title song, the lyrics introduce the fictional band that performs on the album. […]

[…] “Sgt. Pepper’s Lonely Hearts Club Band (Reprise)” is a modified repeat of the opening song at a faster tempo with heavier instrumentation. The track opens with McCartney’s count-in (retained in the manner of “I Saw Her Standing There“, the opening song on the Beatles’ first album); between 2 and 3, Lennon jokingly interjects “Bye!” Ringo Starr starts the song proper by playing the drum part unaccompanied for four bars, at the end of which a brief bass glissando from McCartney cues the full ensemble of two distorted electric guitars (played by George Harrison and Lennon), bass, drums and overdubbed percussion. In addition, McCartney overdubbed a Hammond organ part onto the track.

While the first version of the song had stayed largely in the key of G major (except for transient modulation to F and perhaps C in the bridges), the reprise starts in F and features a modulation, to G. The mono and stereo mixes of the song differ slightly: the former has a fractionally different transition from the previous song, and includes crowd noise and laughter in the opening bars that are absent from the stereo mix.

The idea for a reprise was Aspinall’s, who thought that as there was a “welcome song“, there should also be a “goodbye song“. The song contains broadly the same melody as the opening version, but with different lyrics and omitting the “It’s wonderful to be here” section. At 1:18, it is one of the Beatles’ shorter songs (the shortest is “Her Majesty” at 0:23). The reprise was recorded on 1 April 1967, two months after the version that opens the album. At the end of the track, Martin’s pre-recorded applause sample segues into the final track of the album, “A Day in the Life“.

[…] Paul McCartney played it live on the 1989–90 Paul McCartney World Tour. On subsequent tours he would play the reprise version and use that as a segue into “The End“. When the performance is released, it usually is listed as “Sgt. Pepper’s/The End“, shortening the name of the song. When McCartney performs it, he usually adds the count-in after the drum part begins, as opposed to McCartney’s count-in preceding the drum opening. […]McCartney and U2 played the song at the start of the Live 8 concert in Hyde Park, London on 2 July 2005. The song, starting with “It was twenty years ago, today“, was chosen amongst others to commemorate that Live 8 took place approximately twenty years after Live Aid. The single was released for charity on iTunes, and set a world record for the fastest-selling online song of all time. […]

The crossfade joins this to the following song, A Day in the Life. The edit in mono [a] is better, so the last note hits the first chord of A Day in the Life, while there is a delay in stereo [b].

Mono [a] starts with unknown spoken words not in stereo [b], then both have a countdown with someone saying “bye” (?) behind it, then [a] has more drum beats to start. During the sequence just described, crowd noise in mono [a] starts louder, dies down, then up to a cheer, while crowd noise in stereo [b] stays steady at medium volume– the crowd noise seems to have been added during mixing. Right before the vocal is a “woo”, louder in mono [a]. Toward the end in mono [a] Paul is heard shouting unintelligible phrases (“we are the greatest”?, “the band, the one and only band”? among other things) starting near the last “Sgt Pepper’s lonely”, while in stereo [b] John is heard nearer the end saying something like “hold my guitar for me”.

Getting very near the end, the Beatles recorded the last new number for Sgt. Pepper just two days before Paul was committed to fly out to America, the sessions over. Possibly for this reason, but also because it was technically less complicated than the other tracks, this final song – the reprise version of the title cut – was started, completed and mixed in a single session, albeit one that didn’t finish until six o’clock the following morning. The master was Take 9, with overdubs – the version here is a basic track, Take 5, with Paul’s guide vocal. 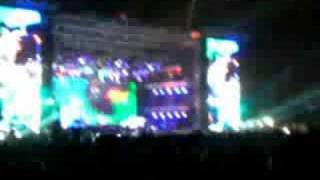 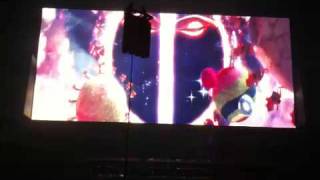 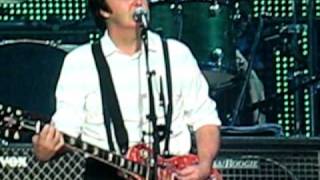 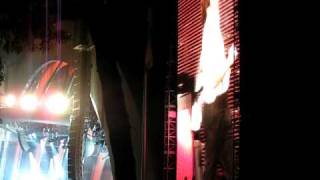 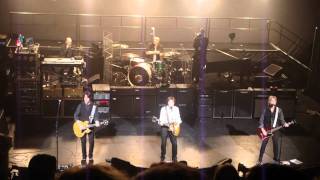 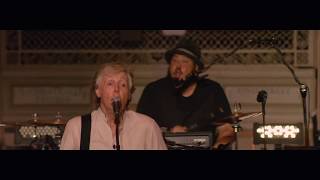