“Sgt. Pepper’s Lonely Hearts Club Band” is a song written by Paul McCartney (credited to Lennon–McCartney), and first recorded and released in 1967, on the album of the same name by the Beatles. The song appears twice on the album: as the opening track (segueing into “With a Little Help from My Friends“), and as “Sgt. Pepper’s Lonely Hearts Club Band (Reprise)“, the penultimate track (segueing into “A Day in the Life“). As the title song, the lyrics introduce the fictional band that performs on the album.

Since its original album release, “Sgt. Pepper’s Lonely Hearts Club Band” has also been released on various Beatles singles and compilation albums. The song has also been performed by several other artists, including Jimi Hendrix, U2, and a comic interpretation by Bill Cosby, using the opening to John Philip Sousa’s Washington Post March as the instrumental bridge.

In November 1966, on the flight back to England after a holiday, McCartney conceived an idea in which an entire album would be role-played, with each of the Beatles assuming an alter-ego in the “Lonely Hearts Club Band“, which would then perform a concert in front of an audience. The inspiration is said to have come when roadie Mal Evans innocently asked McCartney what the letters “S” and “P” stood for on the pots on their in-flight meal trays, and McCartney explained it was for salt and pepper. This then led to the Sgt. Pepper’s Lonely Hearts Club Band concept, as well as the song.

The group’s road manager, Neil Aspinall, suggested the idea of Sgt. Pepper being the compère, as well as the reprise at the end of the album. According to his diaries, Evans may have also contributed to the song. John Lennon attributed the idea for Sgt. Pepper to McCartney, although the song is officially credited to Lennon–McCartney. The Beatles recorded the track in Abbey Road’s studio 2, with George Martin producing, and Geoff Emerick engineering. Work on the song started on 1 February 1967, and after three further sessions the recording was completed on 6 March 1967.

On the Sgt. Pepper’s Lonely Hearts Club Band album, the song opens to the sound of a chattering audience, and an orchestra tuning up, which was taken from the 10 February orchestra session for “A Day in the Life“. The crowd sounds edited into the song were recorded in the early 1960s by Martin, during a live recording of the stage show Beyond the Fringe. The song’s structure is:

1. Introduction (instrumental)
2. Verse
3. Bridge (instrumental)
4. Refrain
5. Bridge
6. Verse
7. Instrumental bridge and transition into “With a Little Help from My Friends”.

The song is in G major, with a 4/4 meter. A horn quartet was used to fill out the instrumental sections.

“Sgt. Pepper’s Lonely Hearts Club Band (Reprise)” is a modified repeat of the opening song at a faster tempo with heavier instrumentation. The track opens with McCartney’s count-in (retained in the manner of “I Saw Her Standing There“, the opening song on the Beatles’ first album); between 2 and 3, Lennon jokingly interjects “Bye!” Ringo Starr starts the song proper by playing the drum part unaccompanied for four bars, at the end of which a brief bass glissando from McCartney cues the full ensemble of two distorted electric guitars (played by George Harrison and Lennon), bass, drums and overdubbed percussion. In addition, McCartney overdubbed a Hammond organ part onto the track.

While the first version of the song had stayed largely in the key of G major (except for transient modulation to F and perhaps C in the bridges), the reprise starts in F and features a modulation, to G. The mono and stereo mixes of the song differ slightly: the former has a fractionally different transition from the previous song, and includes crowd noise and laughter in the opening bars that are absent from the stereo mix.

The idea for a reprise was Aspinall’s, who thought that as there was a “welcome song“, there should also be a “goodbye song“. The song contains broadly the same melody as the opening version, but with different lyrics and omitting the “It’s wonderful to be here” section. At 1:18, it is one of the Beatles’ shorter songs (the shortest is “Her Majesty” at 0:23). The reprise was recorded on 1 April 1967, two months after the version that opens the album. At the end of the track, Martin’s pre-recorded applause sample segues into the final track of the album, “A Day in the Life“.

When the Beatles’ recording contract with EMI expired in 1976, EMI were free to re-release music from the Beatles’ catalogue, and in 1978 issued “Sgt. Pepper’s Lonely Hearts Club Band”/”With a Little Help from My Friends” as the A-side of a single, with “A Day in the Life” as the B-side. The single was released on Capitol in the US on 14 August (closely following the release there of the Sgt. Pepper’s Lonely Hearts Club Band film), reaching number 71 on 30 September 1978 where it stayed for two weeks. The single was issued on Parlophone in the UK in September.

In 2006, the reprise was re-released on the album Love, which was a theatrical production by Cirque du Soleil. The updated version is a remix featuring samples of other Beatles’ songs and fades out before the cross-fade into “A Day in the Life“.

The notebook used by McCartney containing the lyrics for “Sgt. Pepper’s Lonely Hearts Club Band” and other songs was put up for sale in 1998.

In 1967, Jimi Hendrix played the song live at the Saville Theatre in Shaftesbury Avenue, which was leased by Brian Epstein, only three days after it had been released on record, with McCartney and Harrison in the audience. Another live version by Hendrix recorded at the Isle of Wight Festival was included on a posthumous live album, Blue Wild Angel: Live at the Isle of Wight.

“Sgt. Pepper’s Lonely Hearts Club Band” was never performed live by the Beatles. It was performed by three of the former band members (McCartney, Harrison and Starr) plus Eric Clapton on 19 May 1979, at Clapton’s wedding party.

Paul McCartney played it live on the 1989–90 Paul McCartney World Tour. On subsequent tours he would play the reprise version and use that as a segue into “The End“. When the performance is released, it usually is listed as “Sgt. Pepper’s/The End“, shortening the name of the song. When McCartney performs it, he usually adds the count-in after the drum part begins, as opposed to McCartney’s count-in preceding the drum opening. […]

McCartney and U2 played the song at the start of the Live 8 concert in Hyde Park, London on 2 July 2005. The song, starting with “It was twenty years ago, today“, was chosen amongst others to commemorate that Live 8 took place approximately twenty years after Live Aid. The single was released for charity on iTunes, and set a world record for the fastest-selling online song of all time. […]

On 4 April 2009, McCartney performed the song during a benefit concert at New York’s Radio City Music Hall and segued it into “With a Little Help From My Friends“, sung by Starr. […]

The crossfade joins this song to With a Little Help From My Friends.

The lead guitar starting around “I don’t really want to stop the show” is louder in mono [a], barely there in [b]. The crowd noise differs between the two and the crossfade is less well hidden in mono [a].

One of the things about the Beatles is that we noticed accidents. Then we acted upon them. When we had a tape playing backwards by accident, we would stop and go, “What is that?” A lot of other people would go, “Oh God, what is that bloody noise?” But we always loved being sidetracked by these ideas. In this case, I’d gone to the US to see Jane Asher, who was touring in a Shakespeare production and was in Denver. So I flew out to Denver to stay with her for a couple of days and take a little break. On the way back, I was with our roadie Mal Evans, and on the plane he said, “Will you pass the salt and pepper?” I misheard him and said, “What? Sergeant Pepper?” We had recently played Candlestick Park. That was a show where we couldn’t even hear ourselves; it was raining, we were nearly electrocuted and when we got off stage we were chucked into the back of a stainless steel minitruck. The minitruck was empty, and we were sliding round in it, and we all thought, “F***, that’s enough.” That day we decided we wouldn’t tour again. The idea was that we would make records, and the records would tour. We’d once heard that Elvis Presley had sent his gold-plated Cadillac on tour, and we thought that was just brilliant. So we thought, “We’ll make a record, and that’ll be our gold-plated Cadillac.” On the way back from Denver I suggested to the guys that we take on alter egos. The concept was that we’d stopped being the Beatles. We were now this other band. I did a sketch in which the four of us were pictured in front of a floral clock. It was as if time stood still, because the clock was made of flowers. There was something lovely about that. The idea was that the band were going to be presented with a trophy by the Lord Mayor of London, or someone like that. So, we agreed on the cover idea, then went down to the costumier Monty Berman, in Soho, to be fitted with the band’s outfits. I must admit I’d taken some acid in Denver, and this was all a kind of game I was playing after that trip. I had drawn the sketch to show the guys what this new project might be like. They loved it. And it really freed us up. It gave us a kind of anonymity and a new lease on life.

Paul McCartney – From Paul McCartney on his lyrics: ‘Eroticism was a driving force behind everything I wrote’ | Times2 | The Times – From “The Lyrics” book, 2021

It was twenty years ago today
Sgt. Pepper taught the band to play
They've been going in and out of style
But they're guaranteed to raise a smile

So may I introduce to you
The act you've known for all these years
Sgt. Pepper's Lonely Hearts Club Band

So let me introduce to you the one and only Billy Shears
And Sgt. Pepper's Lonely Hearts Club Band 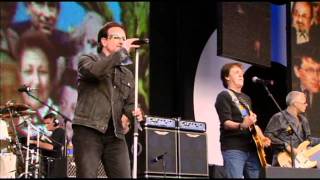 “Sgt. Pepper's Lonely Hearts Club Band” has been played in 197 concerts and 1 soundchecks.

The Night That Changed America: A Grammy Salute to The Beatles

Live At The Apollo

See all concerts where “Sgt. Pepper's Lonely Hearts Club Band” has been played