Wish You Were Mine

Recording "With A Little Help From My Friends"

Recording and mixing "Being For The Benefit of Mr. Kite!", mixing "With A Little Help From My Friends"

This was written out at John’s house in Weybridge for Ringo; we always liked to do one for him and it had to be not too much like our style. I think that was probably the best of the songs we wrote for Ringo actually…

“With a Little Help from My Friends” is a song by The Beatles, written by John Lennon and Paul McCartney, from the album Sgt. Pepper’s Lonely Hearts Club Band issued worldwide in June 1967. The song was written for and sung by the Beatles’ drummer Ringo Starr as the character “Billy Shears“. The song, paired with “Sgt. Pepper’s Lonely Hearts Club Band” and featuring “A Day in the Life” as its B-side, was reissued as a single in the U.S. in August 1978 (#71) and in the U.K. in September 1978 (#63). With a Little Help from My Friends was ranked No. 311 on Rolling Stone’s list of the 500 Greatest Songs of All Time.

Lennon and McCartney finished writing this song in mid-March 1967, written specifically as Starr’s track for the album. McCartney said: “It was pretty much co-written, John and I doing a work song for Ringo, a little craft job.” In 1970 Lennon stated: “Paul had the line about ‘a little help from my friends.’ He had some kind of structure for it, and we wrote it pretty well fifty-fifty from his original idea.“, but in 1980 Lennon said: “This is Paul, with a little help from me. ‘What do you see when you turn out the light/ I can’t tell you, but I know it’s mine…’ is mine.” It was briefly called “Bad Finger Boogie” (later the inspiration for the band name Badfinger), supposedly because Lennon composed the melody on a piano using his middle finger after having hurt his forefinger.

Lennon and McCartney deliberately wrote a tune with a limited range – except for the last note, which McCartney worked closely with Starr to achieve. Speaking in the Anthology, Starr insisted on changing the first line which originally was “What would you think if I sang out of tune? Would you throw ripe tomatoes at me?“; he changed the lyric so that fans would not throw tomatoes at him should he perform it live. (In the early days, after George Harrison made a passing comment that he liked jelly babies, the group was showered with them at all of their live performances.)

The song’s composition is unusually well documented as Hunter Davies was present and described the writing process in the Beatles’ official biography.

The song is partly in the form of a conversation, in which the other three Beatles sing a question “Would you believe in a love at first sight?” and Starr answers, “Yes, I’m certain that it happens all the time.“

The Beatles began recording the song on 29 March 1967, the day before they posed for the Sgt. Pepper album cover. They recorded 10 takes of the song, wrapping up sessions at 5:45 in the morning. The backing track consisted of Starr on drums, McCartney playing piano, Harrison playing lead guitar and Lennon beating a cowbell. At dawn, Starr trudged up the stairs to head home – but the other Beatles cajoled him into doing his lead vocal then and there, standing around the microphone for moral support. The following day they added tambourine, backing vocals, bass and more electric guitar.

[…] McCartney and Starr performed this song for the first time together at the David Lynch Foundation Benefit Concert in the Radio City Music Hall, New York on 4 April 2009. McCartney and Starr also performed the song together on “The Night That Changed America: A Grammy Salute to The Beatles“, a commemorative show on 27 January 2014, that marked 50 years since the band’s first appearance on The Ed Sullivan Show, then again in 2015 at Ringo Starr’s induction in the Rock’n Roll Hall of Fame. […]

This was written out at John’s house in Weybridge for Ringo; we always liked to do one for him and it had to be not too much like our style. I think that was probably the best of the songs we wrote for Ringo actually…

It was pretty much co-written, John and I doing a work song for Ringo, a little craft job. I always saw those as the equivalent of writing a James Bond film theme. It was a challenge, it was something out of the ordinary for us because we actually had to write in a key for Ringo and you had to be a little tongue in cheek. Ringo liked kids a lot, he was very good with kids so we knew Yellow Submarine would be a good thing for Ringo to sing. In this case, it was a slightly more mature song, which I always liked very much. I remember giggling with John as we wrote the lines ‘What do you see when you turn out the light? I can’t tell you but I know it’s mine.’ It could have been him playing with his willie under the covers, or it could have been taken on a deeper level; this was what it meant but it was a nice way to say it, a very non-specific way to say it. I always liked that.

Every time I think of [With A Little Help From My Friends] I think of Ringo standing there in number two on the microphone with John and Paul standing next to him conducting him and egging him on and thumbs up and ‘c’mon’. This was about six in the morning he was told to do that vocal and we dropped the ending, the last ‘friends’ on the track, probably about 15 times. The last note was the problem mainly because it was high. It was a long note, one pitch, it’s quite hard to do, you know, unless you’re Pavarotti or something.

The crossfade joins this to the preceding song, Sgt Pepper, but the songs do not overlap; rather, crowd noise runs from one through to the other. This song starts right before the announcement “Billy Shears!”, which is more readily apparent as a change in ambience in mono [a], since louder crowd noise covers the join better in [b].

What would you think if I sang out of tune
Would you stand up and walk out on me?
Lend me your ears and I'll sing you a song
And I'll try not to sing out of key

What do I do when my love is away
Does it worry you to be alone?
How do I feel by the end of the day
Are you sad because you're on your own?

Would you believe in a love at first sight?
Yes, I'm certain that it happens all the time
What do you see when you turn out the light?
I can't tell you but I know it's mine

Do you need anybody?
I just need someone to love
Could it be anybody?
I want somebody to love

See all bootlegs containing “With A Little Help From My Friends” 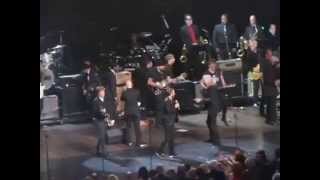 “With A Little Help From My Friends” has been played in 3 concerts.

The Night That Changed America: A Grammy Salute to The Beatles