Recording "Being For The Benefit of Mr. Kite!"

Recording "Being For The Benefit of Mr. Kite!", mixing "Good Morning Good Morning"

Recording "Good Morning Good Morning" and "Being For The Benefit of Mr. Kite!"

Recording and mixing "Being For The Benefit of Mr. Kite!", mixing "With A Little Help From My Friends"

Sir Paul on Fans, the Beatles and Himself

Because I Know You Love Me So

“Being for the Benefit of Mr. Kite!” is a song from the 1967 album by the Beatles, Sgt. Pepper’s Lonely Hearts Club Band. It was primarily written and composed by John Lennon, although Paul McCartney claims that he also contributed to it. The song is credited to Lennon–McCartney.

The inspiration to write the song was a 19th-century circus poster for Pablo Fanque’s Circus Royal appearance at Rochdale, that Lennon purchased in an antique shop on 31 January 1967, while filming the promotional videos for “Penny Lane” and “Strawberry Fields Forever” in Sevenoaks, Kent. Lennon claimed years later to still have the poster in his home. “Everything from the song is from that poster,” he explained, “except the horse wasn’t called Henry.” (The poster identifies the horse as “Zanthus.“)

The song is credited to Lennon–McCartney, but Lennon claimed to have written it entirely himself. McCartney disagrees; in a 2013 Rolling Stone interview states: “I read, occasionally, people say, ‘Oh, John wrote that one.’ I say, ‘Wait a minute, what was that afternoon I spent with him, then, looking at this poster?’ He happened to have a poster in his living room at home. I was out at his house, and we just got this idea, because the poster said ‘Being for the Benefit of Mr. Kite’ – and then we put in, you know, ‘there will be a show tonight,’ and then it was like, ‘of course,’…The song just wrote itself. So, yeah, I was happy to kind of reclaim it as partially mine.’”

The full text of the original Pablo Fanque’s Circus Royal poster is:

PABLO FANQUE’S CIRCUS ROYAL,
TOWN-MEADOWS, ROCHDALE.
Grandest Night of the Season!
AND POSITIVELY THE
LAST NIGHT BUT THREE!
BEING FOR THE
BENEFIT OF MR. KITE,
(LATE OF WELLS’S CIRCUS) AND
MR. J. HENDERSON,
THE CELEBRATED SOMERSET THROWER!
WIRE DANCER, VAULTER, RIDER, &c.
On TUESDAY Evening, February 14, 1843.
Mssrs. KITE and HENDERSON, in announcing the following Entertainments, assure the Public that this Night’s Production will be one of the most splendid ever produced in this town, having been some days in preparation.
Mr. KITE will, for this night only, introduce the
CELEBRATED
HORSE, ZANTHUS!
Well known to be one of the
best Broke Horses
IN THE WORLD!!!
Mr. HENDERSON will undertake the arduous Task of
THROWING TWENTY-ONE SOMERSETS,
ON THE SOLID GROUND.
Mr. KITE will appear, for the first time this season,
On the Tight Rope,
When Two Gentlemen Amateurs of this Town will
perform with him.
Mr. HENDERSON will, for the first time in Rochdale,
introduce his extraordinary
TRAMPOLINE LEAPS
AND
SOMERSETS!
Over Men & Horses, through Hoops, over Garters,
and lastly through a
Hogshead of REAL FIRE!
In this branch of the profession Mr. H challenges
THE WORLD!
For particulars see Bills of the day.
JONES & CROSSKILL, PRINTERS AND BOOKSELLERS, YORKSHIRE STREET, ROCHDALE.

“Mr. J. Henderson” was John Henderson, a wire-walker, equestrian, trampoline artist, and clown. While the poster made no mention of “Hendersons” plural, as Lennon sings, John Henderson did perform with his wife Agnes, the daughter of circus owner Henry Hengler. The Hendersons performed throughout Europe and Russia during the 1840s and 1850s. A hogshead is a large wooden cask.

One of the most musically complex songs on Sgt. Pepper, it was recorded by the Beatles on 17 February 1967 with overdubs on 20 February (organ sound effects), 28 March (harmonica, organ, guitar), 29 March (more organ sound effects), and 31 March. Lennon wanted the track to have a “carnival atmosphere“, and told producer George Martin that he wanted “to smell the sawdust on the floor.” In the middle eight bars, multiple recordings of fairground organs and calliope music were spliced together to attempt to produce this request. In a 1968 interview, Martin recalled that he achieved “this by playing the Hammond organ myself and speeding it up.” After a great deal of unsuccessful experimentation, Martin instructed recording engineer Geoff Emerick to chop the tape into pieces with scissors, throw them up in the air, and re-assemble them at random.

Before the start of the first take, Lennon sings the words “For the benefit of Mr. Kite!” in a joke accent, then Emerick announces, “For the Benefit of Mr. Kite! This is take 1.” Lennon immediately responds, “Being for the Benefit of Mr. Kite!“, reinforcing his title preference from a phrase lifted intact from the original Pablo Fanque poster. The exchange is recorded in The Beatles Recording Sessions (slightly misquoted) and audible on track 8 of disc 2 of Anthology 2. The original recording can also be heard during the loading screen for the song if it is downloaded in the video game The Beatles: Rock Band.

Although Lennon once said of the song that he “wasn’t proud of that” and “I was just going through the motions,” in 1980 he described it as “pure, like a painting, a pure watercolour.”

It was one of three songs from the Sgt. Pepper album that was banned from playing on the BBC, supposedly because the phrase “Henry the Horse” combined two words that were individually known as slang for heroin. Lennon denied that the song had anything to do with heroin.

Mono [a] has more of the organ tape loops in the break after “Henry the horse dances the waltz”, perhaps a track not faded up in the mix of [b]?

For the benefit of Mr. Kite
There will be a show tonight on trampoline
The Hendersons will all be there
Late of Pablo Fanques' fair, what a scene

Over men and horses hoops and garters
Lastly through a hogshead of real fire
In this way Mr. K will challenge the world

The celebrated Mr. K
Performs his feats on Saturday at Bishopsgate
The Hendersons will dance and sing
As Mr. Kite flies through the ring, don't be late

Messrs K. and H. assure the public
Their production will be second to none
And of course Henry the Horse dances the waltz

The band begins at ten to six
When Mr. K performs his tricks without a sound
And Mr. H will demonstrate
Ten somersets he'll undertake on solid ground

Having been some days in preparation
A splendid time is guaranteed for all
And tonight Mr. Kite is topping the bill

1:05 • Outtake • C • Takes 1 and 2. The recordings presented here come from that initial Abbey Road session, 17 February 1967, when the Beatles cut seven takes, beginning with the above dialogue that introduced Take 1, and the performance that followed and immediately broke down. Then there is Take 2, which also broke down, and the ensuing conversation wherein Paul offered John some direction.

2:34 • Outtake • D • The next cut, Take 7, formed the basic for the eventual master (which was Take 9), opening with George Martin encouraging the Beatles to perform, and then pumping away at the harmonium which he played on the track. Near to the end, this recording is crossfaded with an organ and calliope effects tape, prepared on 20 February, that formed part of the final master but is clearer in this new mix.

3:22 • Studio version • E • As the title suggests, the track contains the whole of "Being For the Benefit of Mr. Kite", the guitars from "I Want You (She's So Heavy)" and heavily delayed vocals from "Helter Skelter". This track also contains horse sounds from "Good Morning, Good Morning", harmonium and other elements from "Cry Baby Cry" and laughter from "Piggies".

Out There Tour Korea 2015 Seoul

Studio version • Speech from before Take 1 ; Take 4 and speech at the end

See all bootlegs containing “Being For The Benefit of Mr. Kite!” 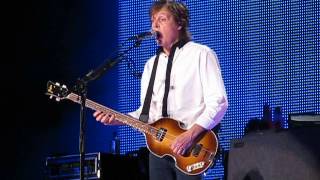 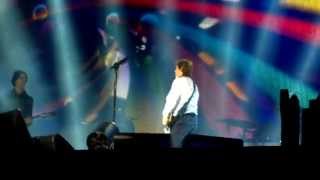 “Being For The Benefit of Mr. Kite!” has been played in 211 concerts and 7 soundchecks.

Latest concerts where Being For The Benefit of Mr. Kite! has been played

See all concerts where “Being For The Benefit of Mr. Kite!” has been played