"Give My Regards To Broad Street" sessions

“Silly Love Songs” is a song written by Paul McCartney and performed by Wings. The song appears on the 1976 album Wings at the Speed of Sound. It was also released as a single in 1976, backed with “Cook of the House”. The song, written in response to music critics accusing him of writing only “silly love songs”, also features disco overtones.

“Silly Love Songs” was written as a rebuttal to music critics, as well as former Beatle and friend, John Lennon, accusing Paul McCartney of writing lightweight love songs. Author Tim Riley suggests that in the song, McCartney is inviting “his audience to have a laugh on him,” as Elvis Presley had sometimes done.

But over the years people have said, “Aw, he sings love songs, he writes love songs, he’s so soppy at times.” I thought, Well, I know what they mean, but, people have been doing love songs forever. I like ’em, other people like ’em, and there’s a lot of people I love — I’m lucky enough to have that in my life. So the idea was that “you” may call them silly, but what’s wrong with that?

The song was, in a way, to answer people who just accuse me of being soppy. The nice payoff now is that a lot of the people I meet who are at the age where they’ve just got a couple of kids and have grown up a bit, settling down, they’ll say to me, “I thought you were really soppy for years, but I get it now! I see what you were doing!”

By the way, “Silly Love Songs” also had a good bassline and worked well live.

McCartney allowed the horn section to create their own parts for the song.

The US single was released on 1 April 1976 and spent five non-consecutive weeks at number 1 on the Billboard Hot 100. “Silly Love Songs” was the number 1 pop song in Billboard’s Year-End Charts of 1976. It was also the group’s second of three number ones on the Easy Listening chart. In 2013, Billboard Magazine determined the song is McCartney’s biggest US chart hit of his post-Beatles career, ranking at No. 36 on the “all-time” charts. The UK single was released on 30 April 1976 and reached number 2 on the UK Singles Chart. The single was certified Gold by the Recording Industry Association of America for sales of over one million copies.

The song was McCartney’s 27th number one as a songwriter, the all-time record for most number one hits by a songwriter. (see List of Billboard Hot 100 chart achievements and milestones) With this song, McCartney became the first person to have a year-end No. 1 song as a member of two distinct acts. He previously hit No. 1 in the year-end Billboard chart with “I Want to Hold Your Hand” in 1964 and “Hey Jude” in 1968. In 2008, the song was listed at No. 31 on Billboard’s Greatest Songs of All Time, commemorating the 50th anniversary of the Billboard Hot 100 chart.

“Silly Love Songs” has since appeared on multiple of McCartney’s greatest hits compilations, including Wings Greatest and All the Best!. It also appeared on the “Hits” half of the compilation Wingspan: Hits and History.

“Silly Love Songs” has generally received positive reviews from critics, despite the common criticism of the song lacking substance. AllMusic’s Stephen Thomas Erlewine described the song, as well as its follow-up single, “Let ‘Em In”, as “so lightweight that their lack of substance seems nearly defiant.” Music critic Robert Christgau called the two tracks “charming if lightweight singles”, while Rolling Stone critic Stephen Holden said “Silly Love Songs” was “a clever retort whose point is well taken.” John Bergstrom of PopMatters called the song “an exemplary piece of mid-‘70s pop production and a pure pleasure.”

I was getting slagged off for writing luv songs. You see, I’m looking at love not from the perspective of ‘boring old love’, I’m looking at it like when you get married and have a baby. That’s pretty strong: it’s something deeper. For me, that’s what always makes me write the next love song – that I love it. I don’t mind being sentimental, I love the old movies. I’ve never been too ashamed of all that stuff.

Originally I wrote this song at about the time when the kind of material I did was a bit out of favour and you had Alice Cooper doing “No More Mr Nice Guy” and that kind of hard parody. I rather picked up a feeling in the air that ballads were being regarded as soppy and love songs as too sentimental.

I thought – so what’s wrong with silly love songs? I was striking a blow for nice sentimental love songs.

In the film this is the second big studio number which we made as if for a video. Really we just wanted to use the opportunity of being in a studio to dress up. The story for the film was that we were on a planet and we were a little music box that appears every day, plays a song and disappears.

Paul McCartney – From the “Give My Regards To Broad Street” book, Pavilion Books, 1984

"Silly Love Songs" is one of the 154 songs covered.

You'd think that people would have had enough of silly love songs
But I look around me
and I see it isn't so
Some people want to fill the world
with silly love songs
and what's wrong with that?
I'd like to know
cos here I go again

You'd think that people would have had enough of silly love songs
But I look around me and I see it isn't so, oh no,
Some people want to fill the world
with silly love songs
And what's wrong with that? 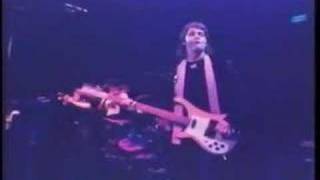 “Silly Love Songs” has been played in 43 concerts.

Latest concerts where Silly Love Songs has been played

See all concerts where “Silly Love Songs” has been played

Due to the amazing bass performance, this is one of my favorites. Do you know why Paul doesn't play it anymore on concerts? The pre-concert DJ do play it, but Paul doesn't

With the brass section added to the new Freshen Up tour, I had expectations that Silly Love Songs would be back. It's also a favorite a mine, especially the live version of 1976 on "Wings Over America" which is fantastic ! Thanks for your message Eduardo !