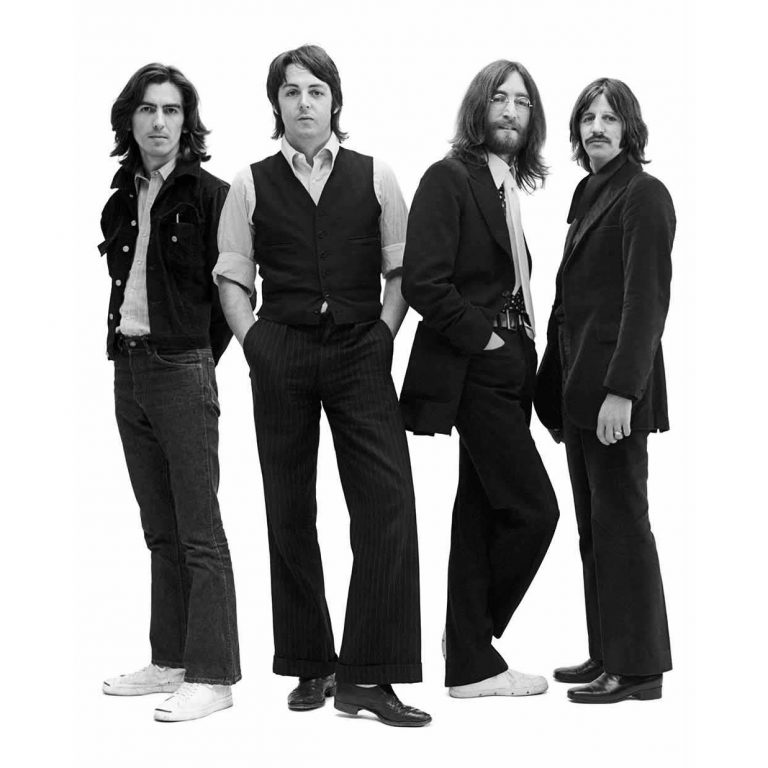 On this day, The Beatles met together for one of their latest photo sessions. From beatlesbible.com:

It took place in two locations, with three photographers taking pictures of the group. The first location was at the Madingley Club on Willoughby Road in East Twickenham in London, followed by more shots taken at number 4 Ducks Walk where they boarded a boat on the River Thames.

The Beatles and the photographers took three vehicles to the location – John Lennon’s Rolls-Royce, a white Mercedes and a Humber Snipe. The first photographs were taken with The Beatles leaning against the Rolls-Royce, with the Thames behind them.

A crowd soon gathered, and The Beatles obligingly signed autographs. Afterwards the group moved to the second location, where they were photographed climing into a rowing boat, the Fritz Otto Maria Anna. They rowed to a small island in the middle of the river, from which they waved to the camera on the river bank.

Apple wanted fresh photos to refute rumors of them breaking up. We spent the entire day, first in the studio on a white background and later outside wandering around along the Thames. They showed up with their wives and girlfriends dressed as you see them in the photo, no stylists, art directors, hair, make up or assistants. They asked me what I wanted them to do and I said just stand on the white background. The photo you see and others from that session are purely their own body language and arrangement. A few months after this they parted ways.

I can’t remember what we agreed, but I do know I sold myself very inexpensively. I never heard any more until about a week later during a lunch break on The Magic Christian. Peter Sellers said would I mind popping into his trailer for a minute? So I went over to his dressing room and Derek Taylor was there with all four Beatles. Of course, I knew Ringo, and Derek then introduced me to John, Paul and George.

And I can tell you this, it was a mind-numbing moment to see all four of them right in front of you. We talked about what we could do if we did a photoshoot. It was not meant to be mean-spirited but at some point Paul McCartney said, “This is all really wonderful but we have had so many bad experiences with photographers ripping us off and releasing unauthorised pictures. I have to ask, how can we be sure that you are not going to do that?”

I did not have an answer. There I am being interrogated by all four Beatles. Peter Sellers then came up behind me and said, “Boys, I would trust Bruce with my wallet.” And that is how I got the job. Peter just defused the whole situation in a way that was so characteristic of him. ‘The thing was that as far as The Beatles were concerned Peter was the big star. They really idolised him, having grown up listening to radio shows like The Goons. That was the backstory but Derek explained to me that there had been a lot of bad press recently and rumours were rife that the boys were breaking up. Which he said, of course, was untrue. So he told me they needed group photographs to rebuff those rumours. They wanted happy photos to put out to disprove the fact: they were all here, they were all mates and they would be continuing to work together. Little did I know or most of the world know they were already at odds. So that was the thrust of my assignment – to come up with happy photos of The Beatles together. […]

I didn’t get any art direction from anyone. There were no wardrobe people or make-up experts. I was mentally trying to figure out what to do so, like any photographer, I put up a white background and lit it so that when they came in we would be ready to shoot. […]

We made small talk before finally one of them said, “So, what do you want us to do?” So I said, “Why don’t you all go and stand on the white sheet?” That was all my direction. All the shots were those four guys arranging themselves without any direction from anyone else. They were talking and joking and they just seemed to have an understanding of each other, which I never experienced again with a group of people. I don’t want to say it was telepathic but you could feel how they reacted to each other.

The whole thing was very unprepared. And that is the way I like to take pictures, which is not to tell people what to do but to let it all happen organically. And that way you capture them much more naturally and that is what happened with The Beatles.

In those days we were shooting still film, not digital. I had been shooting colour but I wanted to shoot black and white the way I had done that morning. John was steering the boat back to its mooring and I called out to them, “Hey, guys, could you do that again?” And John said from a distance, “Look, people are always asking us to repeat ourselves but we never do. So, no, we won’t be doing that again.” And I totally got it. I suddenly realised why they hadn’t wanted to tour anymore and why their music always had to progress.

I never detected any attitude between them during the time I spent with them. In one of the final frames, McCartney is looking really glum but by then we had been at it for about four hours. Looking back at the pictures now, George Harrison looks a little detached from the rest, which may or may not have been significant. I got the impression that Paul was the spokesman for the group. George was very quiet. John was a free spirit. Ringo was a very zany, loose kind of guy. McCartney struck me as the businessman of the group but in a very nice way. It was a seminal moment in my career.

Several photos of this day were first published in The Beatles Monthly Book N°72, July 1969.