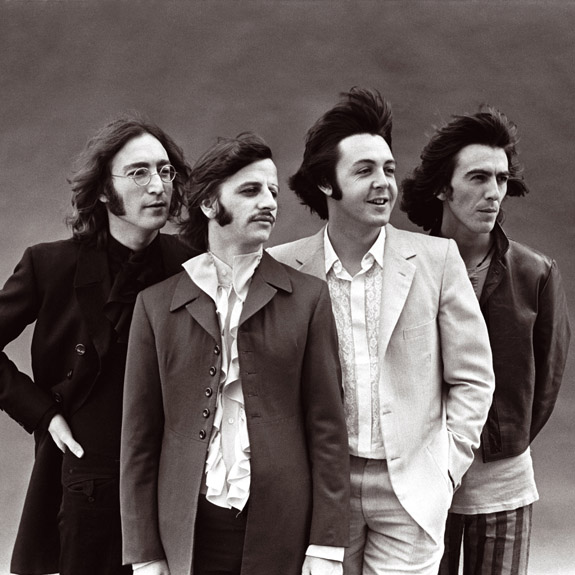 The Apple shop in Baker Street closes down

In the early summer of 1968, Paul McCartney telephoned esteemed war photographer Don McCullin to ask him to spend a day photographing The Beatles. The group was in need of new publicity images, and wanted to get away from the recording studio temporarily.

There were seven key locations around London in what became known as the Mad Day Out.

From The Mad Day Out Photo Session | The Beatles:

In the summer of ’68 The Beatles were in the midst of recording ‘The Beatles’ (The White Album). To produce a new set of more contemporary publicity images, Don McCullin, predominantly a photographer of war zones, was commissioned for a day-long shoot around various locations in London. He practically “levitated two inches off the ground” he was so surprised and thrilled to receive The Beatles’ invitation. On Sunday 28th July, having just photographed them for a Life Magazine cover, they set out on a jaunt now known as The Mad Day Out.

Their itinerary took them from the Sunday Times building on Gray’s Inn Road to Cable Street in the East End (McCullin claimed they’d feel comfortable there – the river and surrounds might remind them of the docks of Liverpool. Anyway, he knew parts of Whitechapel like the back of his hand). From there, McCullin and the band went to Old Street roundabout, on which they posed, much to the surprise of the taxi drivers who waved whilst whizzing round for second looks. After that, to Limehouse and the beautiful Georgian sea captains’ houses around there. Then, a community hall back in the East End, playing with a parrot for a while before heading back to Paul’s house in St. John’s Wood and his geodesic-domed glass ceiling.

The idea was to get together a whole new collection of pictures, really good ones, from which the fan clubs could have fresh supplies. this time The Beatles were determined to do something a bit better than just putting their four heads together in front of a wall. After all, a selection of pictures would be going all the way around the world to more than 40 different branches of The Beatles fan club so it was worth a bit of special effort to turnout good ones.

From Tom Murray’s Mad Day Out Photographing the Beatles | The New Yorker:

[…] Don McCullin—a distinguished war photographer and a Sunday Times colleague—asked [Tom] Murray if he’d drive him around while he photographed a musical group. “I knew more about music than he did,” Murray recalled. “I thought I might get a few snaps, so I grabbed a Nikon and two rolls of Ektachrome.” When they arrived at the Times, Murray said, he heard someone playing ‘Lady Madonna’ on a piano. “We went in, and there were the Beatles, and I said, ‘Oh, shit.’ Don said, ‘Didn’t I tell you?’ ”

McCullin took a picture that appeared on the cover of Life two months later, and then they all went looking for interesting locations—an adventure known to Beatles scholars as the Mad Day Out. “They were recording ‘The White Album,’ and they hated their publicity photos,” Murray said. “John wanted to be photographed next to Karl Marx’s tomb, but when we got to Highgate Cemetery the gate was locked, so they stood in front of a little house nearby, and we shot them there.” Murray learned later that two young girls inside the house had shouted, “Dad! Dad! It’s the Beatles outside!” But their father hadn’t believed them, and by the time he got to the window they were leaving.

“It was a Sunday afternoon, and on Sundays in those days London was shut, literally shut,” Murray said. “If there had been mobile phones, we’d have been surrounded in thirty seconds, but that never happened. George would suggest something, and then Paul would suggest something, and we just drove around. We did cause two slight rear-end accidents, but nobody else noticed.” Murray shot the same things that McCullin shot, but from different angles—including an unforgettable scene of the Beatles sitting next to and leaning over an oldish man seated on a park bench, sound asleep. […]

We met at Paul’s house around lunchtime and set out in a little cavalcade of vehicles. John came with me in my car and I’d brought my small son Gary along for the ride. The others piled into Ringo’s white Mercedes and a van carrying all the different costumes and clothes trailed behind us at as we crossed London from Saint John’s Wood through the West End to Fleet Street and beyond. First stop was the Sunday Times building where we used the roof to do the first set of pictures. And we used a wind machine to get nice effects on the fellows’ hair. In fact I think it helped to produce some of the first group photographs to show all four Beatles foreheads uncovered beneath wind-swept hair!

It was quiet and they came to the Sunday Times building on Gray’s Inn Road. At the top of the building was a photo studio that had been created by Tony Snowdon. There was no agenda except they wanted to give Life magazine a cover picture, which I photographed in colour. I used Ektachrome, and Ringo’s chrome yellow shirt jumped out of the blue of his suit. I turned on the wind machine…

The wind machine was throwing their hair around and their famous faces looked like the figures on Mount Rushmore. To my amazement it worked and we got a beautiful cover. Thinking back on it, Life used to pay five hundred quid for a cover so maybe I actually lost out on it, but I was thrilled.

Next we turned West again and headed for Bayswater. Our destination was a little place called the Mercury Theatre which is situated not too far from the headquarters of The Beatles Monthly. Good job it was Sunday with all this town travelling to be done. to try criss-crossing London by road on a weekday would have meant spending half the afternoon getting out of traffic jams!

At the mercury we dug out loads of strange costumes, had tea in the theatre bar and then did some more pictures. A zoological man brought along a brightly coloured parrot which settled peacefully upon Ringo’s left shoulder and didn’t mind having his picture taken!

We found ourselves in a strange community hall somewhere in the East End. Somebody produced a parrot. The light was terrible and I was struggling with reloading my cameras. There was an old upright piano and they started fooling around with it.

From there we went East again stopping in a suburban residential area to do a few street shots in front of houses before heading for the London Docks.

We reached Old Street roundabout and I just asked them to get up on it. Once they were on the roundabout they obviously thought they might as well do something and performed completely spontaneously for me. You can’t direct people like that. The choreography was theirs. The taxi drivers couldn’t believe it as they came round and caught this free show.

Finally, we returned to St. John’s Wood and Paul’s house for more tea and the last lot of photographs. this time Paul’s massive dog Martha got into the act like she always does. Not that anyone minded because she’s a great dog and very photogenic what’s more!

Paul had the ideal spot for picture-taking. We trooped down to the foot of his garden. There, hidden away behind all the trees, Paul has this fantastic glass-domed something. I know there’s a special word for it but I’m sure you know what I mean anyway! It’s quite a high, square building at the bottom with glass walls. Four pillars go right up to the glass roof and there’s a round hydraulic lift. You just stand on the step and up you go into the Dome. Got some great pictures up there with Paul, Ringo and Martha plus a few shots of all the four fellows. Anyway, if and when you start collecting the new set of photographs which the fan club is offering, you will know all about the background to them. Oh yes… and the ones in goggles and crash helmets were done on The Sunday Times roof, too. So now you know!

We went back to Paul McCartney’s house in St John’s Wood, and after having tea we went out into his garden where there was this dome, like something out of James Bond or Doctor Who. We all lay around with a huge floppy dog in this strange science-fiction-like space.

I used to sit round at my house with Robert Fraser, the gallery owner, listening to music. I’d started talking to him about having a folly. I loved the idea of follies and he put me in touch with an English architect who came up with my geodesic dome. It was my meditation platform. The dome is still there with a little Japanese garden leading up to it. So that’s where we all ended up, in the dome.

Paul McCartney – A Day In The Life Of The Beatles, Don McCullin