Paul receives the Reader's Award For Outstanding Music Personality of 1979 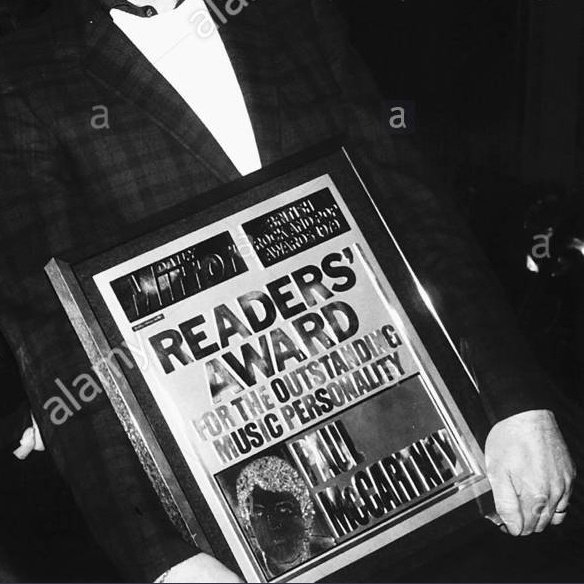 Paul received on this day a “Reader’s Award For Outstanding Music Personality of 1979“, as voted by the readers of the Daily Mirror. This was the first public appearance since the Japan accident. The ceremony was held at the Café Royal in London, as part of the “The British Rock & Pop Awards“. It was broadcast on the BBC and on the same day.

You know what these things are don’t you Paul?

Yes, David… thank you… hello everybody (showing his award).

You… amongst many other things… you had many awards, it’s possible I suppose in someone’s career to get to a point when you become blaze ….have you yet become blase?

Can we take it back then (Paul pretends to hand it back).

I’ll keep it…. I nearly didn’t make it here today.

Because of some pressing engagement abroad (laughter from the audience).

Congratulations, The Most Outstanding Music Personality, it says it all – anything else we say is a bit superfluous…Congratulation once again.

Thank you (holding up his award and giving his usual “thumbs up”).

At the “The British Rock & Pop Awards“, Paul was also a nominee for the Best Male Singer, along with Gary Numan, Cliff Richard and David Bowie. The award was won by David Bowie.