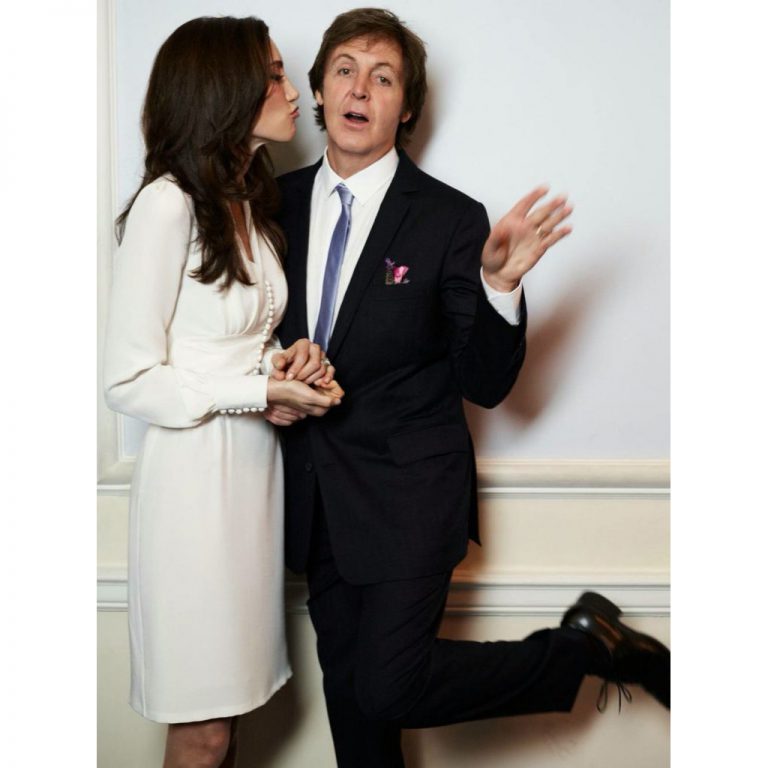 The divorce between Paul McCartney and Heather Mills McCartney is pronounced

There were no sobbing girls collapsing into the arms of policemen as when he wed Linda Eastman in 1969, although fans from as far afield as Japan turned out for the occasion.

It was also far from rock and roll. Sir Paul, 69, and Miss Shevell visited the gym a few hours before the wedding, and returned for an evening reception in their back garden.

“I feel absolutely wonderful,” Sir Paul said as he hugged his new bride. “I feel terrific. I feel married.”

The musician and Miss Shevell, 51, stepped out of Old Marylebone Town Hall to a shower of confetti. […]

Meanwhile, it seemed like the rest of the world’s media had something rather interesting to distract themselves with and I suddenly seemed to be very popular. Rumours of a certain wedding were flying about and each day brought a new unfounded theory about what was going to happen. Some people are very inventive indeed! The truth of the matter is that the happy couple had a low key and intimate day that was just as they had wanted… despite the huge amount of interest from around the globe. There was certainly no way the big day was going to go unnoticed and the press duly went into overdrive, with the streets outside Marylebone Registry Office packed with fans, well wishers and cameras.

The wedding party itself was a classy and elegant affair that looked like a magical enchanted scene from a woodland fairy tale, brought alive by the huge amount of love in the place. It was such a fun night too with much dancing and laughing until the early hours. A highlight for me had to be seeing Ronnie Wood on the dance floor cutting some moves to his own hit with The Faces, ‘Stay With Me’. Certainly, pop star (turned wedding DJ) Mark Ronson pulled some great tunes out for the occasion including tracks from The Beatles, Amy Winehouse, Prince and of course some Macca solo material – ‘Coming Up’ went down particularly well. As you’d expect, Paul and Nancy were on the dance floor all night clearly loving every moment and were joined by smiling family and friends including the likes of Kate Moss and Jamie Hince. Safe to say it was a brilliant night and a privilege to be there – my congratulations to the happy couple!

Nancy and I want to thank everybody for the wonderful greetings and messages of goodwill that we received. We had a really great day with family and friends; it was relaxed, fun, emotional, heartfelt and a total pleasure for the two of us and everyone involved.

You may have read, in the media, some of the details about our happy day but, as not all of what was reported was totally true, here are a couple of corrections for those of you who like to know the truth:

It was said that my brother, Mike, was my best man. In fact, it was my lovely son, James, who did me proud. It has been said that Stella designed the menu. In actual fact, it was my daughter Mary who did. It was also reported that I sang Let It Be and Let Me Roll It at the reception but, in actual fact, that’s not true and I think the reporters may have got confused by hearing a few of my other songs being played by our DJ for the night, Mark Ronson, who, by the way, did a sensational job, keeping us all bopping till the early hours of the morning.

But even though they got one or two things wrong, what they did get right was that Nancy and I, and all our lovely guests, had an unbelievably great day and send our love to all of you.

If McCartney didn’t perform “Let It Be” or “Let Me Roll It“, he however performed “My Valentine“, which would be released some months after, on his album “Kisses On The Bottom“.

Paul performed a special song late in the evening. He had written it especially for ‘his lovely’ Nancy for this day.

It was lovely. She was truly touched and looked as though she shed a tear. I had a lovely time. It was superb. It couldn’t have been more superb or perfect a wedding.

There was a lovely song that our kid did, and they had a lovely dance together. That was a nice little highlight of the evening.