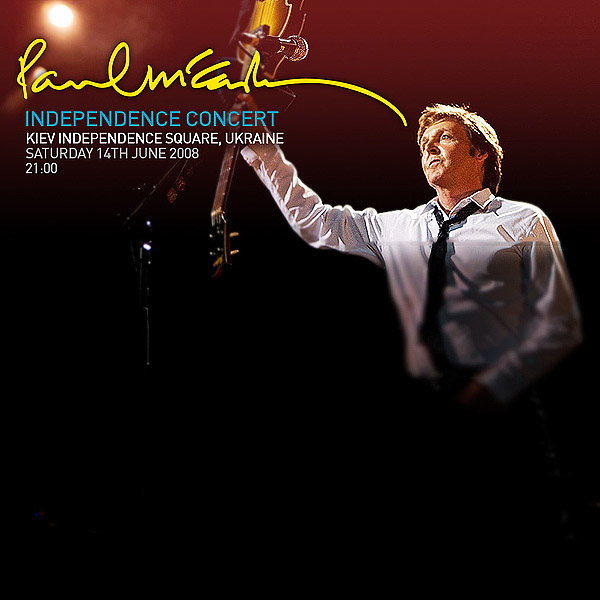 On February 24, 2022, Russian President Vladimir Putin announced a “special military operation” in Ukraine during a televised broadcast, marking the start of a full-scale invasion of Ukraine.

During his US “Got Back” tour (from April 28 to June 16, 2022), immediately preceding the encore at each stop on the tour, Paul and his band members left the stage and each returned with a flag, Paul holding the flag of Ukraine.

On this day, July 3, 2022, NBC TV broadcast the programme “Ukraine: Answering The Call”, to raise awareness about and funds for Ukraine. The programme showed Paul McCartney and his band performing John Lennon’s song “Give Peace A Chance” during their 2008 concert in Kyiv.

On June 4, 2022, during a soundcheck at Syracuse, Paul was seen playing a Gibson Les Paul electric guitar, painted with the Blue and Gold colors of the Ukrainian flag. This guitar, autographed by Paul, was auctioned by Gibson between November 11 and 13, 2022, and raised $76,800 to help Ukraine.

Paul McCartney, Billie Eilish and Finneas are some of the acts added to a special TV programme that aims to raise awareness about and funds for Ukraine.

The show, which also airs on US channels MSNBC and CNBC, is an hour-long event that will give viewers the chance to help families by donating to the International Rescue Committee, an organisation that helps people affected by humanitarian crises to survive, recover and rebuild their lives.

Ukraine President Volodymyr Zelensky will address Americans during the special and will encourage them to use their voices to fight for peace. NBC News will share reports on the stories of real people all around the world who have been affected by the crisis in Ukraine. […]